TWO days before he came, Jesus (Zarathustra) had gone into a reflective mind - he had, of course, been issuing his silent goodbyes, knowing that his lot of life was to be changing very soon.
During his childhood he had got used to a small but invisible companion that had followed him throughout all of the changes to come - a child that grew as he grew: as an infant in the crib, crawling, sitting, sprawling, grabbing, laughing, playing; a child of light that was always close by.

As a boy there were times together that only boys can know. Life was difficult and trying, even for an adept - especially for an adept. But his friend was frequently there, up to and amongst the adult hardships; and if you had had the eyes to see, oft times, out on errands or meditative rests, you could glimpse the young man Jesus sitting beside another, who although quite ethereal, appeared very much the boy, as his friend. 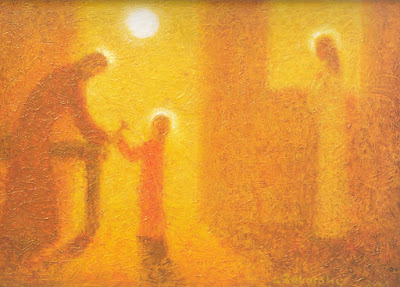 There was a constant consoling of sorts, for Jesus could not abide the current world as it was, and wrestled his own fit within a people and a time that had dust for words and even less for thoughts.

Yet the presence of his ethereal brother never failed to soothe him of these troubles. There was always a reasoning and enlightenment that answered his baffled protests. In turn he cared for Him, inspiring and likewise comforting his companion in kind.

And soon, very soon, he was to make ready for the exchange. All of his life he had wanted nothing more than to change places with his beloved Christos. How often the solid souls of The Faith cry unto Him from the Eons past until now that same plea:

"Oh Lord, come fill me with Thy Presence,
And I shall surrender unto Thee
All that it is that I have,
In my power and possession,
That is most rightfully Yours,
To become and perfect in me." 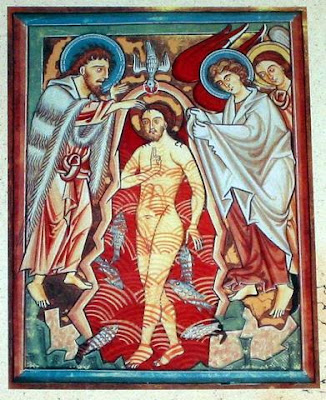 The romance of melancholy drew him into a conflict of airs - yes, to say goodbye to those he held close, in circumstances that could not be well known....this in itself was a sadness perforating the instinctual joy.

Mother had sensed a preparation and change about to become. She had always been able to perceive little Christos, and regarded Him (although unseen to most and ephemeral to the World itself) as one of her own also. She held an understanding when there was no one to explain the many cosmic movements conspiring around her. Perhaps another silent counsel tutored her? Or even still, was it just another norm so known? Man replaces child, why not then man replaces man?

Two days before, Jesus stood at the riverbank and preambled his transference - in the uncanny way our imaginations can, snatching into the unveiled futures. Past his inner eye trudged the procession of Humanity pushing right up through the gates of the Ages. Their faces were ashen, expressionless and weary. Yet in this vision their robes were superior and quite glamorous. It was not as an exodus of migrants fleeing an unwelcome land - displaced poor, ill, old and ugly. This representation of the souls of the World was well formed and nurtured, yet spiritless, humorless and impotent.

Even with the disdain so strongly experienced, Jesus went to that inner place where hope for these souls was yet believable. He could feel in himself so closely and almost, the very strength it could take to absolve each one of the countless into a life eternal, full of grace and abundantly glad. It seemed both real and possible.

His resolve was clear and charming. He looked mentally over his shoulder for Christos, who was not there but rather had been playing catch-up with a passport authority, somewhere between the Young Spirit of the Ages and the benevolent Father Time.

Jesus could not tell really who and what had to be in obeisance to pull this one together. What planets were fixed, and did it really matter? He knew that Christos was that strong, not just by sense, but in that the weather seemed to change around Him, as so did people for that matter, in extraordinary calm. It would not surprise him if a painting could paint itself or the stars would step aside to let Him pass - moreover it seemed natural, for that was exactly how he felt before Him.

Love with reverence, and Love with Love - knowing Christ as he had done, he recognized that all was empty without Him. The sweetness of the sweet and the flavor of all flavor, how apparent it was when one saw this great God and how all hearts would beat much faster around Him.

Two days later he went back to the River to see John....

All that is Man is mighty and strong. Our physical frame holds it well. This physical life tempers the god within; and with restraint and constraint we evolve.

Maria hugged her son goodbye - she could feel the tiredness within, and that his Spirit was stretching itself to get out. This was too blessed a time to become upsetting to her, for also she understood how very close the two had always been, and in her mind bethought that somehow there should have occurred two births, rather than the one. Mistaken or not, her reckoning was that they had been twins and it was their right to share, even this, the one Life. She had no foreknowledge that that life so given, would hardly go on past a few years to come. 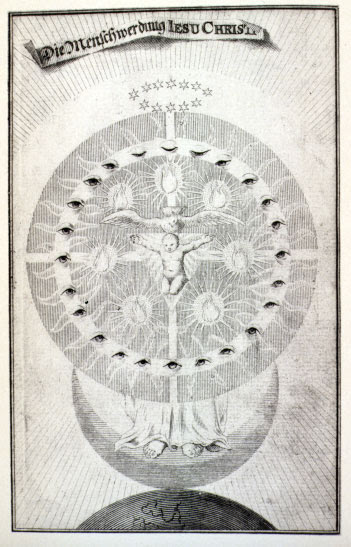 He did not see a dove or any bird above that day. The very last thing he felt was the weight of John's hand - a thick hand, but a good hand, guiding him down. The water filled his ears and his soul spilled right back out hemorrhaging into it, diffusing itself into expanses that spanned the very skies.

He felt good, really good, albeit briefly. For what seemed like only moments later he could see himself standing upright again. And there, wearing his mantle so well, superimposed over and through the sodden flesh was his shining Beloved. "I do hope it goes well" he thought....
Easter

Email ThisBlogThis!Share to TwitterShare to FacebookShare to Pinterest
Labels: Baptism