There was once an old farmer who had many chores to do, and was dismayed at not being able to manage very well. He prayed to God to help him, and no sooner than he had done this there appeared a helpful monkey, sent to him by God - God explained, that he would do as he was asked and serve him well.

The old farmer was delighted and asked Monkey to go and plough the fields. Because this monkey had been sent by God he was a very fast worker, and before the farmer could sit back down upon his chair the monkey had returned at the door, asking for another chore. This time the old farmer asked him to mend and build the fences around the farm. Before he could put his coffee-cup to his lips, the monkey had returned having fulfilled this job as well.

The old farmer then asked the monkey to paint the outside of the house and barn, and once again, before the coffee was half drunk, the monkey had finished his work.

All day this continued until the Farmer was too exhausted and pleaded with God to show him what to do with the monkey, who kept returning with speedy enterprise. God said to the farmer to ask Monkey to go outside and build a pole. The farmer did this; the monkey then too. Then God told the farmer he could ask the monkey to climb up and down the pole until the farmer called him. 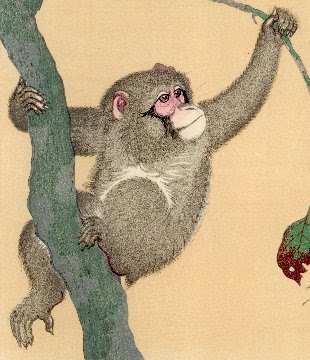 Tradition is, that the monkey here represents the active thinking mind. Sometimes we are well served by our thinking and sometimes it can become too busy, and like the farmer we become run by it, rather than have it serve us conveniently!

Here we have depicted the heavenly monkey who from great labor has achieved the fruits now that have come to him. He represents inspiration from an active mind that also knows the wisdom in stillness.
Posted by Bruce at Friday, June 03, 2011