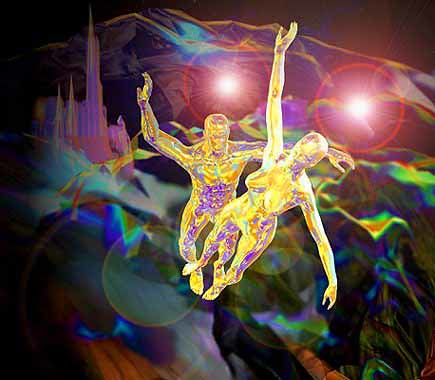 Question: I am in contact with a man who claims he receives on a regular basis, a form of writing called Xenoglossy, which he is unable to translate. Could you please comment on this?

SPIRIT dyslexia from the 'back-to-front' land of the astral planes is not unusual. A man or woman might feel totally impelled or urged to translate what amounts to jumble, because of the needs and desires of that spirit frantic for communication. For the main part, if one were to decipher the text it should in all probability be extremely disappointing - mundane and mediocre accounts of day to day ordeals; and with limited impressions, limited wisdom, limited observance of true Nature, Cosmos and family.

That they are urging quite closely the hand of the receiver implies that they are very close to this world indeed. If it is not an entity pressing in, having newly deceased, there is a possibility that such information can stream from another soul who is quite alive: 'incarnate' and interpreted thus. For there are many individuals who are trapped within an uncomplying body who seek communication most naturally, and make psychic intimations within the ethers. Therefore a consciously active person suffering spasticity or paralysis, one who cannot form words to speak, may in fact impart messages to whoever might receive them. This has also been known to happen - although less often - with coma patients in a similar way.

The ironic pathos of this situation accounted for - as in xenoglossy - is that the coherence of such expression is little better than that from the living individual who has desired above all to make communication. For usually the problems associated affect much more than the physical incapacity, but also for that time the summoning of coherent expression with the subtle bodies. 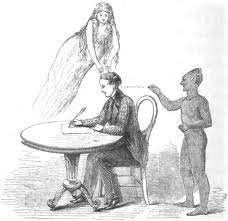 One can measure the level of affectation by the activity pronounced within their dreams, vis-a-vis whether or not the individual carries out certain tasks perfunctorily whilst in certain levels of dream. The individual who dwells in chaos will slumber heavily, as the soul withdraws to those spheres above the usual lower fields of interpretation - recognizing the higher only.

Quite often one will find that the scribe who is moved to relate such 'nonsense' (not meaning to be unkind) has a compassionate empathy or rapport with the communicator. If this is not the case it might well turn out to be a number of 'non-empathetic' beings or shells. However, if there is a human warmth and vitality about the person, one might gauge the very real possibility of a living invalid acquaintance as described. Their powers of telepathy may even be enhanced by their immobility, coupled with the creative forces which issue from a man in any way, shape or form.

The question is therefore, of the advisability of continuing such relay, and the health and wellbeing of the scribe so concerned. Perhaps it is not so much the telepathic act or even the psychic performance which of itself presents problems, but rather that one develops a lowered threshold, putting up with and opening up to the receiving of total nonsense. This is moreover perilous, because if one is in the habit of entertaining madness - truly defined - then it shall become more difficult as time passes to regulate precisely what is received. Because discernment is being consciously hushed, logic is suppressed, self-discipline is discouraged and self is 'pushed out' to allow another entity to prevail. Whilst on the subject, an invalid has no right to go seeking another body to dominate, purely because his own is dysfunctional. His domain is his domain and it is dangerous to encourage the individual into behavior which after death is but a form of possession etc.. So one must distinguish between communication and dominating presence. Whether or not the soul is to be held fully accountable is another matter, but one can say that unfortunately there can be influences which stream out from those original conditions having 'gone wrong', with like consequences ever after. What is 'natural' to something 'unnatural' to begin with, may be devastating for those true to original form.

Communication on a soul-level is preferred. Sadly too, this scenario may be complicated by yet a third party who may influence the invalid and 'semi-incarnate' within what faculties may be persuaded, and thus set upon linkages with correspondence. However all of this is very much the exception to the rule and only made mention of because of the concerns with such mystical language which is unintelligible.

For those who are impelled by such relationships, one might suggest that they pray on behalf of the soul who has impinged with their presence. The prayers are not lifeless but useful, and if well placed may offer much to the soul, for which the soul itself seeks but cannot ask for itself. The fact that there is such a relationship shall mean that the one who overshadows will receive great influence from the loving prayers and directions of he/she whom they have linked with.

Here also is but another good reason for reading psalms, meditations and essays with spiritual morality (especially read aloud), that those souls, who for whatever reason are drawn to you, shall benefit from directed, guided knowledge and inspiration with profound effect. This is the tonic they seek.

It may be that some entities come to instruct, and if worthier material be offered by them, the interchange can be most beneficial. Each individual must decide this for themselves: what exactly they are content with. For quite obviously there are many grades of information and enlightenment, each with certain emphasis; and much energy given to complete time-wasters in the true sense.

Modern man does seem to have a preoccupation of wasting time well, until he pleas for more - although this is not meant to be as cynical as it may sound. However, one must question what exactly the attraction to madness is, be it xenoglossy, cocaine or 'trivial pursuits'. Some would suggest that men seek to hide themselves from themselves and that the world is but painful, so painful that delusion and delirium is sought after. That even extreme beauty can be painful and we are fragile to the truth. Whether or not this is utterly the case, is a question of philosophy. In other words, there are many points of view, each with equal importance.

However, for the purpose of divining the causes of wanton madness, one maybe best assisted in establishing yet another point of view, one which maintains that for all the perilous aspects of the Seasons, the terrible and beautiful winds, the savage climates, the crystalline snowcaps, the floods over barren lands - for all of the fearful elements, they are within degrees (literally) most kind. That if velocity, ferocity and temperature wavered much more beyond the present margins, life would become intolerable. And for all the seeming idiosyncrasies of Nature, there is a divining medium which cares for her own. Life/Nature is generally coherent. It is beyond the present ability of Man to fully interpret this, however if the perception was adept, one would be more than satisfied that the world is indeed a kindly place, and far from nonsensical in all of its incorporations.

Therefore it is because of a man's limited ability to interpret his way in the world (or heaven) that he would impose madness, further madness, into his perceptions. But nevertheless, such madness or affirmation of such, has no bearing on the ordered reality maintained within the globe and extending out.

To some this knowledge is a comfort, and well might be. Just as the mysteries of written language are revealed to the child who begins to piece together the sense and syntax of the squiggle! There can never be a case 'for' madness, much less for a language so profound that it speaks to no-one.