AS soul proprietors we all know just how difficult it is not to mortgage ourselves into the vagaries of self abandonment, giving up the freehold of Spirit for the tenancy of this World.

And it is somewhat true, that negotiating any lifetime requires a mask and a gluepot (an old expression); meaning that the fabric of earthly living is short-lived and by all appearances ever changing, with an inevitable death.

The question that was raised tonight was: "Why do we incarnate at all?" "What is the benefit and purpose for ourselves and the Spiritual Worlds?" 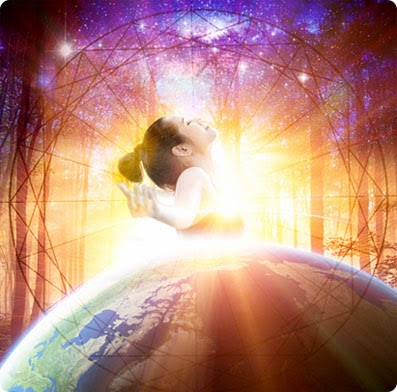 There are two types of Purpose - one is where the kernel of its truth and benefit is there right from the very start and does invigorate the spirited soul who drives it.

The second, is that Purpose that is as yet unrealized until the fulfillment of duty and action has been complete. It is a Purpose which is spirit in the making, unresolved as to outcome, but imagined in the Divine Mind and incorporated there before its play.

Such Purpose could be attributed to the incarnation of the Cosmos as known through the higher Gods, and the extraordinary drive around which the Physical Worlds have been manifested. We can consider what it means for the 'higher' life to be entitled in Matter, and what possible benefit this could bring.

In order for something, for anything to exist, it must have its place within the whole, within the frame. Things, whether they be widgets or new planets, must have a place for their nature to be incorporated; and within that place a solid fit. If one digit of a widget was out of place, for example, then the entire fit would become maligned very quickly and obsolete. Place and purpose are prerequisite to existence. Furthermore this Purpose needs be conducive to the whole (must fit also), and cannot stand apart from its environment else the environment would dissolve its place in rapid transit.

This principle cannot translate into the social context, where the world of ideas and paradigm can preexist existence itself, seemingly, but is more to the point of a veritable truth underpinning consequence; i.e. existence requires substantiation from a place and purpose outside of itself in order to be, and this existence needs be in concordance with that which parents it.

Now having said that, one could see very clearly that parentage is going to determine much of the ongoing status of that which is to follow. Life remaining faithful to the Life from which it is born of - that which substantiates its being - is rightfully coherent to the Nature that enables it.

However and having said that, there can be just one very small anomaly in this divine principle of precedence, and that is that life can become static through its own self fulfilling repetition.

In other words, this requirement of 'fitting in' to a wonderful operating system such as it is, with the highest of Holies and the best Parentage one could hope for, this evolving and perfecting routine is also held in place with a uniform expectation and outcome.

If you ever thought that Karma has a tight grip, just try the slap of the Almighty!

Now on the whole this is of course, the highest Grace to become ennobled by; and if choosing, there really is no choice, because the ways of God really are the only way. And more than that, there is no better place to be, sustained by the Heavens and protected in their hold. But (and it is a very small 'but') in the scheme of things, it could become, by stagnation, undone.

The physical existence is not anarchical or complacent; it was not, interestingly enough, born of the same either. There was no physical system that preceded it, and the Space and Purpose from which it began, took on attributes of increase - of multiplying - which hitherto had not occurred before. It is now known as the "Fishes and Loaves" principle of need and multiplication. And it is extraordinary.

Formerly, for example, there was (and is) a system whereby the enlightened/advanced beings within the Spiritual Worlds could be graded from the highest to the lowest, in a natural sequence. If you were to pictorially view this, you would see the being who is most advanced at the top and then all the others in their placing, coming in one beneath the other in a gradient that only affords a single plane to each. The positioning might shift from time to time, but the gradient is always there - from the highest to the lowest - you can see it.

Here it should be added that this gradient is not a harmful thing, it merely is a truth of its own keeping. If I held a race, and at the end of that race there was but a very small door to go through, then there would be no doubt as to who managed to get through first, second, third and so forth. There also would be no 'ties' in place, just a single succession of winning places. And so the grading of development finds its levels similarly and obviously, giving one place to one station at any one time.

Yet with the Material World in its system, all men within it can and do arrive at the same stations simultaneously and together. This in itself, as said before, is extraordinary and innovative, and has ramifications for the Spiritual Worlds without also.

Returning to the concept of Space, Purpose and Continuum - we found earlier that Space and Purpose are generally limited to propagating more of the same. We found that the element of repetition is intrinsic to this system, in a positive way, of course.

But now there is another aspect to Cosmic Life that is introduced - and it is not a defiance of Space, but an expansion of it. It does not involve going against the nature of the divine Purpose at the heart of that Space, but rather multiplies its possibilities.

Here is a project and plan of vast proportions - and how quickly we can see the hopes for the many becoming realized as were never before allowed or allocated for previously.

Through Christ, the realization of a divine actuary has been incorporated (through His Being, which is at the pinnacle of this gradient aforementioned, in Supreme development and success), circumventing the one way, small door principle, and replacing it with a charity of the highest, that no longer is the ladder to Heaven with single rungs and constant formation, it is a whole. And added to this, the codicil that Men can acquire on behalf of other Men also, that learning and development is infectious, and improvement can be and is collective.