Steeled, and with tamed enthusiasm,
The marksmen waited in a line of ten.
Each, one bow, many arrows also;
In cordial relay, they tensed in lateral readiness.

The Deer of Christ came dancing by,
His horns gold,
His face a soft brown fuzz.
His eyes, intelligently peeked with a knowing,
Sought those of all ten men;
Whilst His soft and panting breath a'glowing,
Frisked the air with the vapors of Eden.

Long while it seemed the challenge was on.
With calm authority, the Deer paced the ground.
It was Marksman One who saw the flame upon,
And His Divinity,
He addressed them most somberly -

"Fellow hunters, this is just no ordinary deer.
Not the 'breathing meat', as might first appear;
This Deer is blessed,
And He comes with a purpose.
Should we follow His Service,
We will find our true contest."

And on their knees,
The ten knelt down before Him
(Clenching the fist).

When the Deer with the golden antlers
Came to Egbert,
He had known where he would be taken.
Out from the ten,
In sole requisition,
He followed the holy creature,
Without fear or insult in his station.

Oddly however, Herald did chase behind.
Long time companion to Egbert,
Supporting every excursion even before;
He would not stop now, pursuing his cause.

And like a Rumplestiltskin,
But with a sleepless dream (not dreamless sleep),
Egbert aged in rapid time -
For time had hastened,
Or his own strength abandoned,
And when the Deer came finally still,
Egbert was a weary soul,
Now come to his life's end.

He began to see ghosts all around -
And in his reasoning,
Felt not far from dissolving
Out from this world in a similar way.
These ghosts were accusative,
Demanding also.
Grief overcame our Egbert,
For this was not the outcome
He had hoped for.

Herald who had not been far behind,
Came forward and held up his beloved Master.
His vigor did seemed replete,
As he puzzled at the ghosts all around.

"They have no substance Master Egbert"
He said with good cause.
And the ghosts vanished back
Into their shadowy doors.

Inconsolable Egbert, saddened for himself,
Distraught at the thought of the others' expedition,
He had encouraged them so, into this perdition.
Perhaps this animal was no more
Than foul and mischievous enchantment?
Certainly he had ventured thus
With no reward or commission apparent.

The Deer stamped his hoof - three times,
Thud, thud, thud -
And the dirt from the earth
Became beads of gold in the wind. 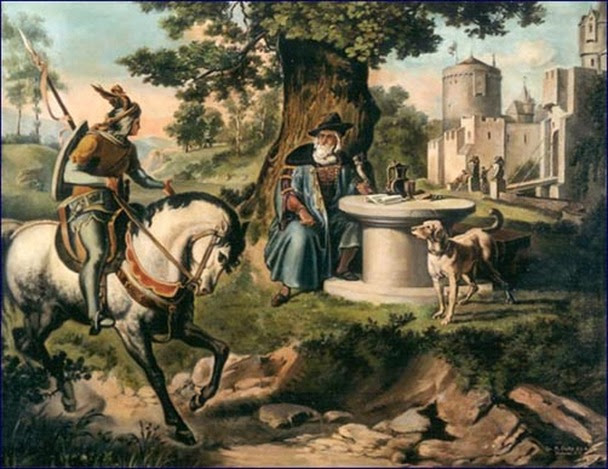 On his left there were a gathering of servants,
Angelic he could ascertain,
For their goodness emanated from them.
It was impossible to count them,
But they appeared as a multitude at the ready.
This vision was most comforting,
And as he looked across this one body of beings,
He saw also the ranges and the terrains he had traveled.

Clouds and fountains, texture and colors,
Worldly formation came and swept across
This angelic grouping -
That in mix and mingle had pieced together
The world he had known
In the greatest obeisance.

To his right was a darkened hole of exaggerated terror.
Noises and smells arose out from that gape,
And the fear in contagion gripped at his throat,
And his chest stifled also, contemplating that pit,
Trying his best to see past, it invoked yet more fright.

And yes, there was a fine rope bridge,
That from one side to the other,
With all of the meaning of a fairytale
Awaited his courage a'further.

The Deer spoke to him through His eyes.

"Egbert, you are frightened,
Because the pit before you is frightening.
Your Humanity is appalled at its existence,
And your own spirit's sense of mortality startles before it. 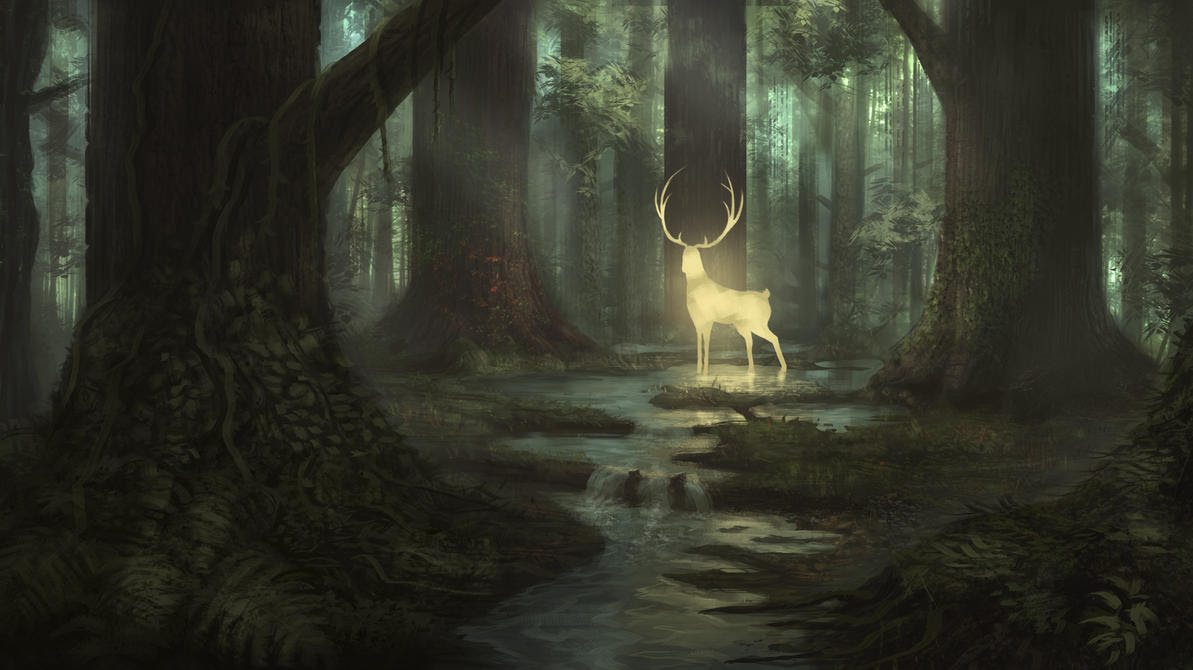 "This pit and what is in it,
Is not of your own making.
The gods of old left their mess in there,
Long before you thought it your own.

"Do you concede that sin originated in you?
Can you truly own its sorry refuse?
I think not.
For the decadent turmoils that transmute
Into the disease of the world,
Came not of Man,
But of decadent gods."

Deceptive doubts now hissed warningly out from the hole.
"Do not believe him,
We are yours, we are Man".
And Egbert himself edged a little closer now
To hear better, only half afraid,
Feeling more able, more capable of tolerating this filth.

The stench all at once turned into scent,
Musk-filled, ever stronger, saturate with sex,
The aroma of exotic smoke, of liquor's ferment,
The odors of excitement, and of aggression's excrement.

The voices eked out louder now....saying:

And for one black moment
Egbert considered this idea.
And then in another he saw their cunning most clear.

Although Mars had not quite the height of these two,
He was known well to all for his fantastic strength;
From the ferocity he bore rather than lone muscle,
And his temperament, which unwavered,
Even with a dubious moment.

An uncomplicated fellow with a veracious edge,
Mars was at his best as the righteous warrior -
Straightforward and explicit, in all things.
His manner was duly abrupt, but not unkindly,
Just matter of factly, decidedly flattening.

Plain food and a simple life was his creed.
And contrary to his talent,
He bore a constant of peace.

When the Holy Deer had come to Mars,
He had envisioned a panorama
Of the little Heavens there before him;
A concordance of tenuous connections -
And a sequential cast of beings.

Firstly it had felt right,
That each place was filled most properly.
And the tension which was life,
Was quite perfect.
And on this day he was the happiest
That he had been - probably ever.

He sensed correctness everywhere.
He understood the parallel function
True strength enables.
Even the strength in his manhood felt
Mighty and holy and perfect.

Looking hard at the deer,
He saw ten roses spry out from His horns!
And so, regarding with gratitude,
He pried each off the tip,
And collected the petals,
Into the bag on his hip.

Adonis had meanwhile found savor,
In the inspiration of his companion from afar.
He did not perceive the Heavens
In their orderliness quite like Mars,
But he did feel empowered by their Graces.

Throughout his vision he was led to an altar,
Whereby a communion cup was waiting,
And the bread laid out beside.

"This is the table of your Marriage"
Spoke the Deer to Adonis, through his eyes...
"And this, you cannot do alone".

Adonis was sad all at once,
For clearly he had gifts before him
That were not his to take solely,
Yet he was all by himself,
Save for that mystical Deer. 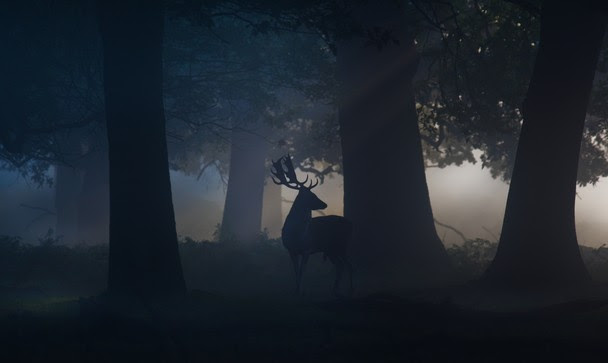 The Deer approached him
And Adonis buried his head in the fur of the neck and wept.
His left hand touched one branch of the golden antler
And for a moment his breath departed his soul.

For he was given yet another vision of the altar,
But this time it was a marriage bed,
And death bed all in one.
There laid upon this holy piece,
Was the one he knew to be his wife -
And in knowing that, it was as natural as him as he knowing himself.

"Both my death and my life are to be in this union"
He said.

Chapman and Mercurii started out
Carrying each other's packs -
The Deer approached them and spoke to them, through His Eyes.
"You can ride me if you will",
And lowered Himself before them.
Mercurii helped Chapman (who was a little more portly than Mercurii)
Lift himself atop the beautiful creature,
Then very nimbly, did the same.

As soon as they were secured,
The Deer took off at a rapid pace!
Faster than a prospector falls down a mine!
Faster than sweet disappears in a child!
Faster than the sled-ride into death and out the other side!

These two podgy arrowsmiths laughed the whole event,
Such was their congeniality,
And in that, their heartfelt merriment.

Psyche did sit quietly,
In muse's counsel,
Waiting for the Deer to approach in His good time.

He was the only one out of the ten,
To not see the Deer as an animal of the Woods,
But instead, as the God of the gods of Little Heaven.

The pulse of Life became stronger between the two,
And they sat together in the leaden silence.

Reaper had listened in to this discourse.
He had come from a faraway place,
And was considered most foreign to the ten.
An immigrant with an insidious charm;
As often was his own misfortune to appear at those times
When the very world was crumbling;
Never at the beginning, always at the end.

The Deer took pity on him at once.
Reaper had suffered his annihilating and killing,
Yet was no mean reformer,
Just a huntsman with a perfect shot -
The nightmare of the world,
The mercenary of a defining heaven.
He had no living part or plot amongst these men,
Yet his presence was there nonetheless.
"Reaper" called the Deer through his tear-filled eyes,
"See now the ebbing finale".

And before this marksman
Ten sparrows alighted all around.
One sparrow flew to the altar
Where Adonis lay beside his love,
Now spent, with his heart grown cold.
Reaper knew of this withdrawal -
From the cavity, and the pledges of passion,
Into that space absorbed.

Another sparrow hastened its way
Through to a mother giving birth.
Just as the infant was being brought into the world,
There was Reaper,
That she might let go of her child.
For without the Reaper's insistence,
This mother would have labored indefinitely,
The womb is protective of its kin
And would hold to its love eternally.

A sparrow flew to the side of the marksman Egbert,
And bid him come from the edge of the pit,
That he still lingered by.
Intoxicated and now fearless, he had remained -
That is until the bird had called to him,
And brought him back nearly witless.