Twas twixt the treble and the trill,
Sharp and shafted, shocking and shrill,
Persephone's orbit - the purple Mandrels..

THE Governor once made a statement that there should be no dissension or else he would compromise the offenders with imprisonment. That they, the people, must oblige with a moderate behavior, cordial at all times, irrespective of any black mood or thought they may be harboring. This was fine as it goes… for a while. But as is invariably the case, dissension did manifest audibly - in one, then two and so on, until the entire town needed to be confined within prisoner's shackles.

What is to be learned from this humble story? That people far and wide eventually will grumble? That one may not enforce regulations of restraining behavior and thought past tolerable lines? More so, one may contemplate the idiosyncrasy of a people who, on the one hand are obedient to a man proclaimed governor, whilst disobedient also.


How many times do we find our own selves 'falling down' in our behavior, displeasing our inner dictator? We err, we make good, we tire, we err, and so forth; and we know that our stipulations will necessarily be weighted against what is already achievable. We shall always place self restraints and moral codes fractionally out of reach, so as to aspire and work with intention.


Quite often we neglect to see exactly how far we have come overall. The primitive savage has not the acquired abilities dictated by self-consciousness as the modern man, who is ever fraught with the accompanying dilemmas and frustrations that ensue.


Furthermore, a man today may be undecided as to proper conduct and the desirability of such, whereas a man of last century did not attempt to question the mainstream authority’s expectations. 'Free-thinking' (which did originate in Rome) actually took its time coming into being. The outcome however, has resulted in confusion and upset. There is a void of thought which, once penetrated, becomes so overwhelming that the men who enter, enter at the expense of their identity. One can try to imagine that conditions have not always presented similarly. Choices were not set before men who were taken by their preferred calling in life. Also too, a man's destiny itself was 'tighter' and more restrained.


As we begin to discover the loosening process at work, conspiring a maze of shifting destinies, we may appreciate the inner conflicts a man may generally sense; even though all the while he has not the true knowledge awakened in him of how valuable or difficult the choices he makes determines that which is him. It is a step of great contrast and proportion; a leap in development and soul-building. It is concurrent with the times, when flux and flow ebb to the tide.


Then men scatter and clamor for achievement. When disciples pray for steadfastness and accountants have not the column space for entries, Man is on the move! He is not permitted to remain the same, by self and by law he is not given rest. Certain latent attributes become as lit lamps.. and all at once! They are startled!


With freedom comes loss. Loss of restraint. First instinct for a mammal is to crawl back inside the warm protective pouch, dive deep into the confining hole, withdraw back into burrow and be held snug from beside and behind. Freedom from this is loss of this comfort: the comfort of confine. The pain of such loss is remarkable and irksome.

So too, have men outgrown their burrows, with enlarged destinies they scour the world. Fevered for advancement, confused in the trying, it becomes as the hall of a thousand doors! - disgruntling to say the least. We may 'focus in' upon which door has behind it the golden peanut hid, only to find we do not enter as elephants!


The sense of failure, self-failure, realizes the obstinate open-ended future and is overwhelmed by the prospect of ever confronting the changing tide. The pity is that men who set goals but have not seen them borne out, can become so distressed that they 'lose grip' altogether. There may even be seizures of momentary self-destruction. That they would afflict injury upon their self because of disgrace, because they, the governor, has naught to do but lock the shackles. To them certain freedom does not work and so they seek the comfort of confinement in whatever.

So we must be prepared to meet with failure and digest its wholesome stick-in-the-jaw offerings - without plucking the teeth. How often it is that the depressed man feels 'all at a loss' and is caught in isolation by the sense of helplessness.
At the threshold of profound choice we may feel invigorated with enthusiasm or dismayed with abandonment of prior self. The knack of moderating the future with the incorporation of the past is accomplished when we despise neither and welcome both. Internally there is the choice always before us: to be or be driven. Cessation is not of spirit vocabulary, however active will and higher will are identified, just as a second and third gear.


After death there are many composites which are feeble and naïve, immature to self-direction. They are magnetically housed according to nature and design, but not self-consciously propelled. That is another matter. A man may be drawn to all manner of circumstance, and in the main part will give himself up in accordance to the provisions of attraction. He shall become self-conscious in those areas, in those realms, whereupon his self-consciousness identifies with the reality of substance there. Overall he is driven to be there, even though such motivation comes too from an internal correspondent. Whether he is able to be self-conscious is but another matter.


A criminal may well sleep through his most beautiful interlude on Venus simply because he has not the corresponding insights gleaned in his former life to enable him the perception to actually see what is before him. There shall be however, parts of his soul which identify with the nurturing planetary forces and implications, but not in a manner which is self-evident to a man who has denied such impulses with ungracious disrespect.


In kinship to failure we have recklessness- the "I don't give a damn" frivolity which becomes berserk with the consciousness of possibility. It is all too easy for the immature soul to relinquish care when it discovers the 'new freedom' explicit of these times. Usually a wayward recklessness is incurred because of a related sense of failure also. If a man has a satisfying 'grip' within the world and therefore self-identity he shall be stable in such, however once knocked off his pivot by a disappointment for which he blames himself, he shall often come to recklessness as an intoxicant - relishing freedom in a dangerous way! Dangerous, that is to say, because it is not as intended, for Cosmic Freedom is Cosmic Law (a very good meditation, by the way); and in worldly terms it is by breach of certain freedoms that we come up against state or karmic laws, which soon dissuade us from entering upon one direction and out into infinity. 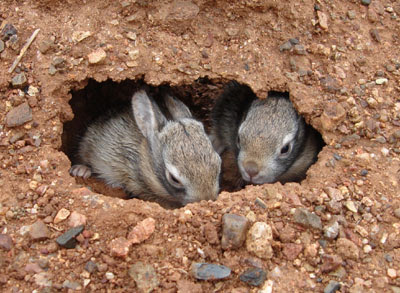 Sadly and predictably, the path of failure and recklessness leads to ever repeated failure, repeated recklessness. The chock upon which it is mounted must be removed and restored to a more suitable perspective; that is to say that the propositions of infinity are enormous, however they are not overwhelming because of the grace of the ever-binding laws within.


Our burrows, our hollow, our pouch, our womb, our connections, our threads, are snug, even in the realm of Cosmic Possibility. It is important for the soul to know and recognize this, otherwise certain dismay and distress will be the consequence.