THE flesh colored pig has brought much controversy with him, for many centuries. The animal has been despised, insulted and shunned; particularly by those races who would not ingest any flesh for fear that such assimilation would invoke evil into their own being, also the wrath of the Almighty by such an offence.

The pig of itself does not appear to exhibit an evil nature. In a well-kept environment, a clean farm or the wild, there is no particular slovenliness which should markedly suggest that which his name now implies. He is intelligent and compatible with men - many a myth has cited cases of human babes being turned into piglets - but apart from his fleshy fullness and his indigestible qualities, one must ask why the pig is the object of such ridicule?

The boar, which has a much hairier hide and pronounced snout, has a temperament in compliance with the wild - and in strict terms the boar is a far distant relative to the pig, in nature but not in form. The Chinese have held to twelve differing representatives from the animal kingdom, which are said to mark twelve differing qualities within the constitution of Man. The boar being one of these, indicates a strength and an earthly steadfastness in his attributes and nature, and is linked closely with the evolution of Man.

The pig however, does not enter into the calendar, because as stated, the pig’s family is quite separate in nature to that of the boar. If the boar is characteristic of a certain facet within the nature of man, and the pig held to be some perversion of the boar, then the pig must also be a perverted characteristic of modern man. It is small wonder then that the pig is held in horror by Man, or distance to say the least.

But one must question whether it is a case of perversion or evolution, or perhaps even a mixed evolution: that is the pig today.

The more compatible an animal is with Man, the less compatible his flesh is to consume- this is a fact. But laws against such ingestion were not simple statements to this effect, for there would be many other such animals implied in this instance, where the flesh itself would detrimental to Man's wellbeing (and remember when one is hungry, one would eat just about anything cooked or raw).

This is the beginning of where Man finds he cannot indulge in the flesh of a brother. Where the relationship is so closely linked, he identifies such characteristics- various attributes that he himself is endowed with. It is but a disgusting and degrading practice to enter into cannibalism of this kind.
Historically and quite mistakenly, there have been practices of all kinds of cannibalism that suggests to the people that certain attributes can sheath the consumer, by the act of that very consuming. Whilst not commenting as to the morality of this unhappy misguided notion, and further in the evil practices that also encourage such ridiculous assumptions, not only is the effect quite the opposite, but largely destructive.

The result of consuming that which is the expression of a being so closely linked with that of ourselves, calls upon the lower realms. Flying in the face, so to speak, of one's humanity and compassion, is to negate that which is characteristic of such humanity, and degrade the consciousness to that of the flesh. For of course, flesh can devour flesh, and in respect to the lower aspects, be quite given over such attributes that are within the flesh, but the essence of that being, which calls the physical form, cannot be devoured. If this could be so there would be men trying to pick the bones of Angels!

Lower entities delight in such an indulgence that negates aspiring humanhood (certain lower entities). And so not only is there a difficulty in the act of such practice, but the added complication in the attraction of equally disgusting elemental creatures, who indulge with the man and cheer him on.

Returning to our friend the pig: The pig is only disagreeable to Man if eaten, as his nature is so developed that Man crosses boundaries, commits the sin of taking into himself the flesh of one who is too closely linked with the nature of himself, in part.

In future days to come, Man will find that the humble pig shall offer to the farmyard a way to earn his keep that shall not be provided by flesh for diet (or for medicine - another disgusting practice), but through a most unexpected contribution. 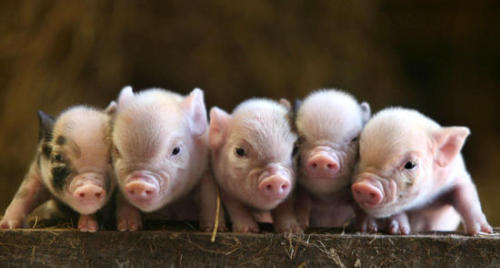