The EGO-IDENTITY & the Sins of Division: Acquisitiveness & Delusion- 3rd June 1991

ENGRAVING AN opal is an extraordinarily difficult task, but when one has accomplished shaping the surface area with deep crevices of design (as with a deep-cut seal for example), one can find the profusion of split colors, in such refraction, quite exquisite.

Many gems have a totally altered appearance, in the cutting and the polishing. It requires someone of skill, expertise, and a sound knowledge of gemology, to foresee the possibilities of an uncut rock. Man has sought out such gems for acquisition, in both talisman and luster ornament, for as many eons as he has sought for new foods - long before the tendency towards 'acquisitiveness' formed, the beginnings of such were founded in the love and lust of the gemstone.

Here we may find marked and explicit changes within the consciousness of Man. Imagine a man moving about the world, with the assistance of his lower ego, identifying all that is perceived to be the arm and the leg, as it were, of his entire being. If a man's consciousness is fully immeshed within the physical conditions that support him and in compliance with this, his consciousness is attuned to the nature, the spiritual nature, of his environment, and the two are compatible, then there is no division between the element of ego-consciousness and its recognition of self, as opposed to the understanding and interpretation of the surrounding world.

However, within the light and glory of the gem-world, man discovered elements within the gem that were not so easily identified within himself. Therefore, he felt the need to take such a substance to himself, and keep it for himself.
All sins originate in the stepping down and out of paradise. Here is the sin of the divided consciousness of ego-identity. 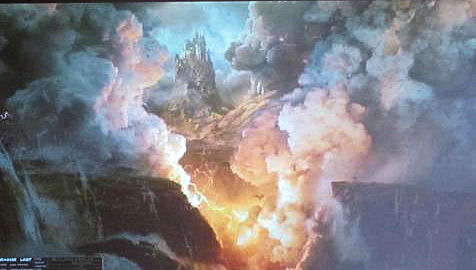 If man were to return to the paradise state of paradise-ego-awareness, then man should have to be compatible with that paradise. However the environment of the world today offers man no chance at such compatibility, therefore no such paradise-awareness may overcome the ego-identity that decides and measures itself against the outer world.

This is necessary to an achievement of a higher ego-identity awareness. For one truly must enter into the higher consciousness to find the paradise that once reflected the Heavens on Earth.

However, all good things come with time, and whilst man has consciousness placed on Earth, the object of the learning is exactly placed within such processes of acceptance and rejection, of consciously identifying the chaff and the fodder, from the food of the soul.

The gem speaks to man of the higher cosmic values. From the sin of division, we find the sin of acquisitiveness. Whereupon once a man was content to experience the beauty and the form, the life and the spirit of that which was outside of his own being, he now seeks to control and determine the confines of that which excites his attention. This is referred to as a sin, as it is in reality an untruth.

One may never artificially take and keep for oneself anything of the outer world for any great length of time: swallow the gem, but will soon pass through! In fact men of the western world, curiously, gather to themselves all manner of objects, which befuddle the onlooker, as to what held the appeal in the first place.

This of course is another matter, but not totally unrelated. However, it should be most useful if one were to examine each and every object that is taken into the house and even treasured, and ask why.

Observe such curios and establish their true significance, for this practice will help one when the time comes that through entering Heaven we take only that which is of true significance and leave the rest behind.

Of course all objects smell of memories. One finds today that folk seldom study any collection of objects for what it is of itself, but of what they should like to make it. So we have a reversal, whereby in the first instance there is immediate recognition that we and the world are one.

In the second, we discover that which we see not in ourselves and seek to take it into ourselves.

Thirdly, try to make a gem from a lump of glass, and then believe it to be so- the sin of delusion.

True observation requires the skill of restraining one's lower ego, whilst being receptive to the impulses of the higher ego; to hesitate before judgment and impulse and consciously direct one's attitude after having been open to such impartial observation. Not all situations allow one to delay the identification of the outer world. However, when this is possible, such delay, such a pause during the process of inquiry and discovery, is invaluable.

888
THE point that was entirely missed was that of living the MORAL life. Here is the perfect example, of the unbalanced mix of quasi-spiritual/psychic perception and intrigue, without the strength and fiber to support and sustain the individual concerned. Moral strength has to be the foundation in any teaching, and is a necessary practice before all else. This is fact.

As for communication: telephones and semaphore, fax and shortwave signals, are not spooky. Telepathy is a communication of the future, and is not spooky. We are very much alive and well. You know of no imposition.
One must never underestimate the soul-importance of living an ethical and upright life. These sorry experiences of your friend, hopefully if anything, shall speak to her of her personal perils, and alert her to her inner problems. Here lies their usefulness.
Posted by Bruce at Saturday, July 11, 2009