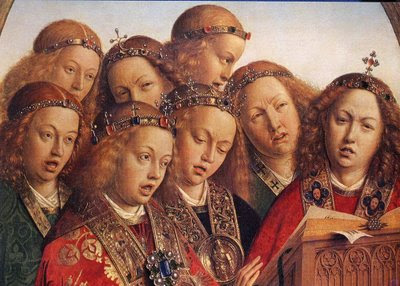 Chortleorious choirs heralding sweet winds,
Summoned with note rising and swell of song,
Gentle breath upon the earth, soothing, healing,
Into the nostrils of valley-men and mountain-men alike.

Tumultuous insult,
The winds that rise to sting and lash,
Bemoaning the cries and harsh words from arguing tongues.

This we make choice:
To seed the world by sweet rejoice,
Or plague our lands,
With unseemly pestilent argument.


SHALL we belittle ourselves by quickening to temper? And by doing so, in such severity, our beloved are as cut and stung. There is no qualification for uncompromised argument. There is no merit borne in upset and dissension. There is no happiness in provoked distemper and intentional grandstanding. As children we may be excused as incompetent, as adults we are to fault. 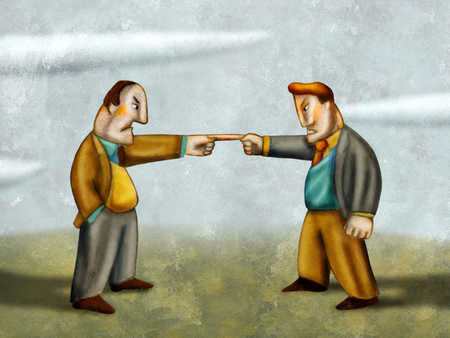 There is nothing that will age a man or a woman quicker than fiery upset engaged in with argument. One has only to look at the geriatric survivors, to find those who were of the sweeter disposition, uncorrupted in the flesh. It is a fact that men require much vitality to be spent when engaged in passionate retaliatory pronouncements. The ‘wick runs down, and the candle shortens all the quicker’, when energies are so misdirected.

When men become indignant and inflamed they are no longer reasonable - to be reasoned with or to offer reasonable offerings. The 'contest' has disqualified both parties at the outset, until such time as it is as contest no more.

Were that there were more shame in filthy arguments. For all the care taken in appearances (which is commendable in itself) a man might best be awakened to shock and shame should he come to perceive the reality of worldly suffering borne entirely by maladjusted argument.

All men may discern for themselves rapidly, the difference between good-humored, good-natured interrelations and the contrast of defensive protest, injurious judgments and bad temper injected upsets. Now is as good a time as any to make a lesson of this, for we must make it known unto ourselves that our behavior shapes the world directly. Our very moods hold consequence. Our attitude can be heavenly or it may banish ourselves from connecting with Heaven. By any measure of partaking in gratuitous upset we become isolated. Furthermore, we do but sharpen our knives, entering the path of violation - cursory though it appears. We must ask ourselves how we may provide a shield of protection for ourselves and our brothers, that we might be impervious to insult and incapable of contributing to any 'ill-will' in the world. This is a far larger issue than that of a handful of students being reprimanded.

Firstly one must realize that the tremendous personality of which we go by, is quick to become 'testy', for it knows in reality, that by standards of the soul it is incompetent. The ears will hear intimations of this and immediately the ego is addressed with echoes of complaint. For example: We are, you are, uncomfortable with this very subject, and the personality is resisting, struggling, squirming, denying, and at the ready to unrestrain a little anger in defense of itself. Is this not so? If you feel in any way uncomfortable then it is so - and may we add, you have been considering what is put before you, consciously and accurately. For even the most developed of souls know of the personality's protests.

It is constantly requiring acknowledgment and subsequent management; for if on the other hand, one did not require to address this, and was not so linked to the ego, there would be a deficiency in character-identity. We cannot deny ourselves - like a watercolor painting using no pigment but all water - similarly we cannot blend all pigment either.

Firstly, we may establish that indignation is natural to the immature personality, for personalities are undeveloped; and whilst it is a mechanism of pride, we must learn indifference to the protests which lie at the kernel of unhappy intercourse.

There is a phenomenon that occurs when a man firmly believes that he is 'right' and that in being 'right' he is permitted to seek the means, any means, in making it known to those around him. Whether he is correct in his thinking or not has little bearing on inexcusable conduct. Other men shall not be led into revelation by the self-righteousness of another if he is delivering his argument with upset or aggression.

Quite often it can begin as frustration: we are frustrated because we long to be understood. We become short-tempered because we are feeling those frustrations crawl upon our limbs, begging for release. We sense our own disquiet. In conversation it is difficult to be mindful of the reality of self and self-conflicts, as well as those exterior to the self. We project outwards continually by habit, deflecting other’s thought, in defense of our own.

Considerations are afforded to like-minded people, but rarely do we make an effort to come to a 'middle-ground' with those who appear vastly different. This takes an exercise of will, whereby we divert our personality's frustrations and protests, and step aside from ourselves long enough to come to another's perspective.

Rather than projecting our own thoughts and opinions out from ourselves, we may actually extend the ego to incorporate experiences presenting before us. Of course we are free to 'shrink back' and resume our personality at will. This separateness is not denial of that which is personally sacred or beloved to us, it is actually a protection of such. It is as breathing in and breathing out.

The soul of the other individual can sense quite clearly when we have released ourselves temporarily and do give them our full attention. We are relaxed in every sense of the word - and if you are not relaxed then you know that you are not achieving this - and we are content to quieten the exclamations of our personality-self and its opinions, and intentionally consider the individual's offerings before us. If this is truly achieved - and it is by no means an easy exercise: it may take a very long time to maintain - then the individual shall relax too and experience communion as rarely experienced before. These are the eyes of love.

We must be ever reminded that the woes of the world are such, because of the demons of dissension, false self-righteousness, self-indulgence and wilful violence.

The poisons which corrupt our selves and our environments are poisons of venomous behavior, not as some imagine, the manifestations in ether, earth or water - these do come after the underlying sins so cast. Should we discontinue to invite corruption, the physical world would hold no place for physical depositories of poisons. It is men that stimulate the astral secretions, it is men that manufacture the injurious plagues by the continuance of upset and release of aggravation and the subjugation of violent thought.

If we are to be accountable for anything, it is more so for that which we are and exude from our being - much more so than by details of the past. We must look to those cruel aspects which harden our perspectives in non-understanding and seek to meet truth honestly, in the humility which can project ourselves away from our failings.


We cannot afford to be content with the persuasions of a corrupted personality which insists that it is developed when it is not. For if we become lazy and complacent about self-development, then we must accordingly bear the result of such.

It is good for a man to love sinners, so long as he does not indulge in that very sin within himself. For if he is to love the sinners because of their likeness to him, not despite of their failings, then he encourages their pitiable plight, rather than releasing them. We embrace the goodness in men and not the insufferable.

We come to know that development is not instant, nor is it self-appointed - God grants development to the needy, who by merit of their conduct require furtherance.