THERE are barriers, opponents, which ridicule the striving man in striving to be his best - particularly relentless at times of exertion and struggle. The very word 'determination' implies that one proceeds 'undeterred', or that at the very least, wishes to be. What exactly waylays the pious and the striving, and separates a man from his visions of self-perfection? And why, once one has affirmed commitment to that vision, is the story incomplete and the man begins ever more challenges - tests as it were, summoning reserves of such determination as is required, affording no release, no pax, no reconciliation with personal devas and devils?

Furthermore, we find that man is 'complete' to begin with: essentially, quintessentially, perfection unrealized. There may come a time within the advanced development of the student, when he has managed such self-perception as to 'see' his own reality of perfection - and more often than not, mistakenly places this (his higher being) to be the Godhead divinity, rather than the lesser being which he is. 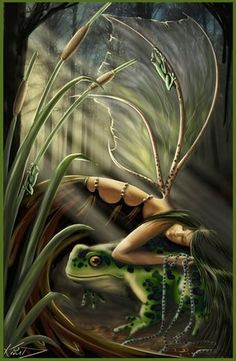 Whilst it holds true that all rays emanate, all sparks must sparkle from said Godhead, it is also equally true to say that they are not one and the same. For the minor shall always be but a part of the greater major, and by being but a portion or a splinter cannot represent the whole. Therefore we cannot presume our image to be the image of God in totality, for it is folly - jolly folly, albeit.
The initiate is scorned also by visions of imperfection. Here lies quite a contrasting paradox. Nothing quite prepares one for comprehensive soul-searching which enlightens the shadows and apparitions of the past. Much company travels with us, although largely inanimate until stirred and ever awakened by recollection and desire.
That we wish to propel forward, we meet with obstruction. How mighty the wind! How taut the muscle! Furthermore, there can be an attraction for men to cast aside their foibles and despise their failings, so much so that they are quite prepared to forsake their humanity: a baby/bathwater situation. This can actually strike down a most advanced student who literally will pluck out the offending eye and join league with a rogue that incites men to be as robots, as predictable, as clean of fault; but not sinless - even though they would see it that way.


When conditions cease to 'hurt' we cease to feel. Men simply cannot be subject to a graded perfection without the sacrifice of such material composite to their being, and totally relevant to their existence, their humanity. Failings hold provision for reform. 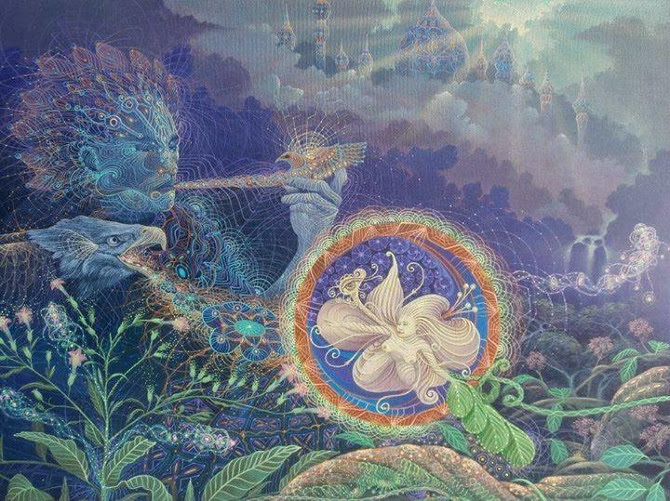 Behind the kingdom of the garden, behind each tree and shrub, leaf and bud, there is an invisible lover, a multitude of lovers, who tend the new growth and suffer with the desolate. These adherent beings - who are of the plants, but not the plants themselves - these beings work accordingly with great patience, reliant upon men to realize their perfection.


For as the story goes, men must advance forward before the time the nature-spirit is afforded their individuality, granted a soul and a sister-evolution that identifies them differently. Man must first cross the threshold, afore these beings are given Time. For they live not in time, but are as perpetual infants or perpetually aged.


They suffer many afflictions dispersed amongst them from the woes of men. Their sympathies are in concordance with the pulse of life itself, and they are not pleased or understanding at the disastrous blunders of men towards their charge. Some are prone to bad tempers - generally a mimic of man acquired. However, pagan though it may tend to be, they are most qualified attendants to the sustaining etheric world they love to frequent. 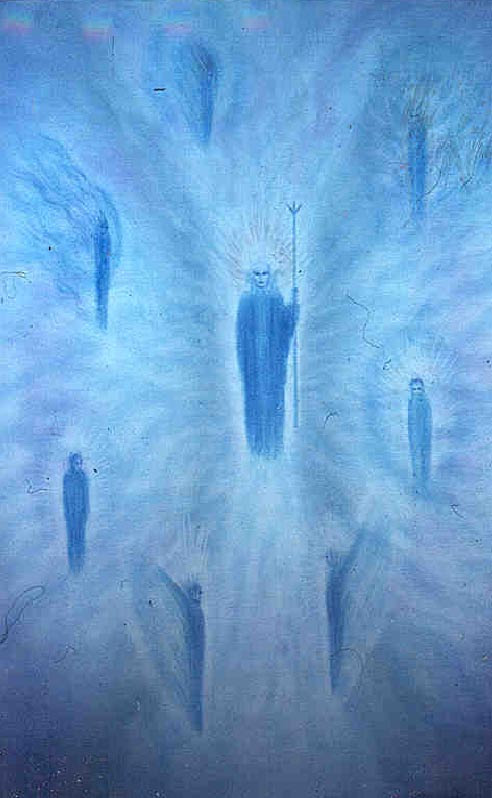 If you are counting on your hand the numbers of plants before you as representing heads of nature-spirits, compared to numbers of men, then remember also that the worldly numbers of men do not come close to the total number of heads, within circulation out of incarnation.

Folk who converse intimately with plants do also - aside from the character of the plant - speak out to its accompanying deva. As proud guardian he/she shall certainly hear remarks directed and possibly make some subtle reply. There can be quite a relationship between gardener and the invisible community to whom he does attend.
Generally speaking, for all the blundering and seeming 'oafishness' men do hold the upper hand of the upper-world and are relatively free from interference or annoyances, or dictates from their fellows of the garden. However, if invited and given license to break into some form of communication - anything up to retaliation, so one must be careful - then it is possible that certain events will be effected directly by one of these beings. For they are not dissimilar to men characteristically, in that some shall be warm-hearted, whilst others incapable of mutual consideration. Some are expressive, some are purely pure mischievousness, others contemptible and unfortunately dangerous.
Men of course, are not alone in their bad habits and imperfections. As just discussed, the lower elemental kingdoms offer already in similar fashion, perhaps although, with less deliberation. From where did the sins and the lesser sins entangle themselves? What exactly entered into possibility for Man at the time of Heavenly impulse acquired?


Remember the thirteenth fairy, the 'bad' fairy that was snubbed at the christening? She, after all but one of the heavenly endowments blessed Beauty, insisted on death, and that it would come of her own doing. [“Every one was terrified at her saying, when the twelfth came forward, for she had not yet bestowed her gift, and though she could not do away with the evil prophecy, yet she could soften it, so she said, "The Princess shall not die, but fall into a deep sleep for a hundred years." ] Past the age of puberty, no longer wrapped within the total innocence of childhood, the young woman was destined to prick her finger and then slumber on.


And sleep we do - throughout every violation to God, every mistake we hide from the soul, we sleep in the wrappings of many an insolentry until. . . how did the story go? The afforded provision was a prince who might struggle through the thorns to climb the castle wall, with valour and determination, to approach the concealed chamber; and entering, finding princess, be moved of heart to kiss her, thereby awakening her back to life! Thus the soul is renewed and awakened, albeit in a future so distant, a span so long that many have lived and died between. What being the key element to all of this? Predetermined time? Perhaps - willingness, vision, an undeterred determination, and a love - true love. The majority were good fairies, whose gifts bring food to the table and attributes befitting a privileged princess. They were joyed to wish well for the human child; with a majesty all of their own. The malevolent fairy was the cause of the upset, and because of jealousy and being 'left out' would poison and corrupt the child who was blameless.

Rivalry between kingdoms is far worse than any general neighboring war. To a large extent kingdoms separate off - even dividing within themselves; even though each does sustain another with great coherence and intrinsic passion.

Yet some of the lower elementals contrive to upset men, who innocent of the fact, are at times so readily persuaded and come to grief because of impish maliciousness. These, as said before, represent a minority (who are admonished by their radiant peers) whose own failings have multiplied directly within the influence of corrupted men. And so it goes. And men do tease and taunt the gods sometimes.


It is important that we pray for all such aggravation to cease. Also, that we may be confident in broadcasting speculation that this will come to pass: that the lion will lie down with the lamb. . . that perfection is but a distance away from those who are virtue-orientated.