RIBBONS, gay ribbons, as streamers or worn on hair, have long represented ribbons similar that fly and stream, in tangle or in wave, out from men invisibly. The expression 'the tapestry of life' is far more than a mere poetic expression. It denotes a certain reality whereby all which emanates out from a man may be interwoven in the supersubstance in spiritual ribbons and ties which stream out to meet more of the same, to receive impulses; and touched by these impulses, weave yet further, more fabric of said ribbon. These are the tentai which we have referred to in the past.

The emanations of man and the aura of man, are often viewed as the gaseous masses which girth planets in colored rings, semi-connected. However, the aura of a man contains many essential and complicated qualities both latent and active, which do extend much further than any vision on any one particular level may indicate. Quite so, as the albumen of the egg - both buffer for yolk and nourishment also - without the encapsulating shell, which is often illustrated as the boundary from one sphere to the next. 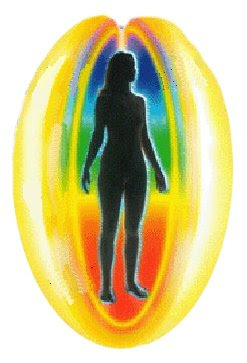 We are all much larger, much much larger, were it realized; as the auric emanations encompass the length and breadth of every corner of the Cosmos. In this respect, all star-travel is conducted by shifting the consciousness to various points of our own auric emanation, rather than the whole constitution picking up and moving on, impinging in spheres which did not otherwise already contain it.

The aura therefore is 'fixed' in this sense, and of itself does not swell, dilate or dissipate. It can, in localized region, be lit to reveal color, depending on the activity of the man and on what particular level of spectrum this is to be perceived. All colors from all spheres already make up the substance of the aura. But activity through the fiery elements which are intensified, will predominate through flashes, sparks and clouds of illumined hues, within that local region of activity; as the sunrise testifies to that which is lit within the aura of our Lord and does so color the atmosphere with impulse so radiantly.

The ribbons as described above, are not of the constitution but rather temporal expressions of desires and thought which are exuded and made within the immediate subtle bodies of a man.

Ectoplasm which would stream from the clairvoyant was viewed as colorless, as it correctly held its colors in the subtle worlds from which it rightfully was born. Such fluent ribbons of ectoplasm streaming from the medium was a good example of such emission; the substance in this instance being totally misdirected, and given over in a quasi-death state which the medium would self-induce.

Characteristically, such a medium would have to be also, almost dead to motivation, self-desire and inspiration, to effect this surplus of materialisations which were born in order that those who were not ordinarily clairvoyant could perceive those shadowy impressions. Moreover, they were physically quite detectable - cold and slimy to be precise.
Also by way of the medium came the ability to deteriorate and unravel their physical constitution in this near death condition. Were one to keep close eye on the medium's body during this process - and usually one didn't, as they were either concealed or attention was with the phenomena - one could witness the dissolving and weakening of that sorry person who imparted those ectoplasmic ribbons.

Ribbons of conscious aspiration the initiate may weave of his own and send out such streams, which may be followed. The fairytale of the two children in the wood, who were forced to venture out from home and tie little ribbons to branches as markers at every turn, so as to find their way back home - this was indeed the story of an initiation. The initiate may do this, however the strife comes when the story turns to the breadcrumbs- the birds eat of the breadcrumbs and the departure becomes permanent.

It is not such a bad idea to tie a piece of string around one's finger for remembrance. We do it all the time. There are threads of this and that, some extended, some unfinished and some frayed, all of our own making. Hopefully some will interconnect - here is the fabric of our being. Remembering that all analogy has a home in a reality somewhere.

Some men walk the world in attire and some men walk with few threads, utterly naked. Andersen's emperor placed all of his work, in cloth and in threading, in the hands of some fly-by-night tailors. We can do this with misplaced values and deceiving teachers who may pretend that soul-finery may be bought; and promise falsely. The emperor was clothed with pretence. Worse still, he and the people could not trust in themselves to really know if there was substance or not.

Little children have a clarity and frankness that greets the world with much eagerness to make design, and produce many, many such aspiring ribbons, which do flap and fly about. They protest to allowing anyone to do their inquiry for them and relish the learning with great pride in every achievement, new thought and ability acquired and mastered. A little child could not have servants to do their learning for them.

We as adults may assume that laziness and the fulfillment of is an acceptable, natural leaning in the world. No so! The demons of laziness might hold to such opinion, and coerce the feeble intellect with lullaby and sweet temptations; and having stripped us of the ribbons which we have past made, parade and jeer, having now what we have not.

Much as self-image is reflected in cloth and neatness, and many aspire to adorn themselves respectfully in the eyes of the world. This is an example of the well earned pride one may hold in one's spiritual garb, which we enshroud ourselves with through striving and methodical application, through wakeful inquiry and revelation, through enthusiasm and love of life and life's labors. Spinning cosmic threads, working the fabric of soul. Wait 'til we get onto needlepoint!