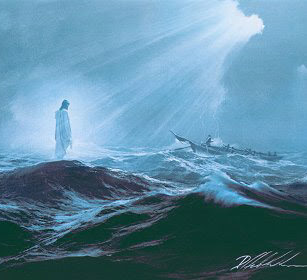 My Life is as the Wind
As it passes over Earth,
Touching the faces of my beloved;
All around them,
Yet they do not see Me
But know My breath daily...

Air of air, Life of life, Light of light -
I am around you unto Eternity.

People ask, what rotates the World?
What moves the heart?
Is it Love or the blood?
I can tell you it is neither,
For what truly moves the heart -
Be it with a saint or be it with a villain -
Is Goodness alone.

Goodness infills the cavities of want,
And where there is wanting,
There I be.
For in Me there is supplication,
Constant remuneration
And continual salvation.

From me the four winds issue:
Of Knowledge, of Peace, of Striving and Grace.

It is asked, where does the World come from?
Is it from the Mind of the Divine?
Or from a corruption of matter into genius?
Or has it peeled time backwards
Perhaps to end as it had begun?

Yet time is not servitude to matter
Nor its commander;
Such worlds are as the cosmic dust,
That glitter the pavements of Heaven,
And are as many in number.

For all of the scores of souls and beings
That populate the Heavenly Graces
Within this whorl of Worlds and times,
Of past and now and so to come,
Are loved and saved, each one.

This World is no different in that
Its substance did come from
Same infinite source,
From which all worlds are drawn.

But time is no master,
And of itself creates nothing,
It only serves to debilitate;
It cannot create.

The origin of Life is Goodness,
And it is all around you.
Find it and you find also,
The answers to all questions.

Our Heavenly home
Does not tithe the wisdoms,
But delivers them daily.

What of the Bloods and why?
Blood conveys life in a singular way.
It has helped to contain that part of a man
Which is unique to him.
We do not bleed in Heaven,
But wear ourselves on the outer side.

And what of the sexes?
Mothers and Fathers -
Not eagles and serpents.
Communion, not feasting;
A higher ordinance calls to the soul
To participate in the sumptuousness of knowing,
And from that becomes Creation.

Knowledge itself is not witless;
It has already a mind of its own.
Men are not exclusive to mind or its imports.
There is not one thing to be known
That has not already been known.

Christendom makes for an awkward franchise -
In service to its people
It can be gracious and healing;
Yet it can also be quick to bully
The very many who are
In most need of a gentle hand up.

Tyrannical rules of salvation
Preclude all true salvation.
For the holy meaning of its delivery,
Is through the sanctity of divine retribution
And forgiveness alone -
And is not in any way
Dependent or assured by a Papal official.

No man can fathom the heart of another
Or deliberate the justice of his term.
The very moment a sin has been entered into,
The heart of the man darkens for that time
And feels the pain of it upon him.

Truly this World is not as substantial,
As you or I would have it.
Yet what we began is circumspect;
It is a house without windows or walls,
Windows for which to see heaven,
Walls that define the very spaces within,
And then multiply increasingly
To the needs of the Earth.

There are two faces to suffering:
The unjust and the incomplete.
Sorrow has meaning,
Whereas cruelty is random
And almost impossible to make peace with;
Therein lies its infection.

For violence incurs the terrible storms,
And a tumult of irrationality manifest.
Jubilation becomes grief,
And we all sorrow
When an unkind thought
composes its malices.

Yet often such torrents of ill reckoning
Come from a deficit of gladness.
The insults of a blasphemy
Know nothing of a true gladness
Or its benefactorial merits.
The angry and abusive are sodden in want
Without the gratitude for that
For which they already have.

Gladness is the cream that sits atop
The sweet milk, not the sour.

Not all words can bring comfort and consolation temporarily,
And not all things of this World may also.
But at the closing of one's life,
And the beginning of the heavenly term,
It is all but washed away and given meaning.
That which causes suffering now vanishes,
Without a stain of even a remembrance,
And is resolved according to its first concern.

Robes are like uniforms,
And designed to hide a man
So that he becomes a face without a face.

Goodness is the ultimate chi,
And for those who do not live this,
They try to energize through other means,
Or people,
But to wit, die in trying.

Breathe goodness and you breathe life.
Gladness, Goodness and Grace - the treble gifts.
The health of the soul is paramount
To the future of Mankind.

This day of ghouls
Is a sad reminiscence.
Pity the ruthless
For they soon become toothless.

All Glory truly be to He,
From which all Truths were born,
And then to live and breathe as soul,
In myriad and manifest,
In places torn and houses blessed.

I give you my word and my Word gives you His,
And my vision of All as it dwells within Grace.
Feel its current,
See its being
In a constant reappearing,
In the wishing and the doing,
And the continual improving.
Bless them All!