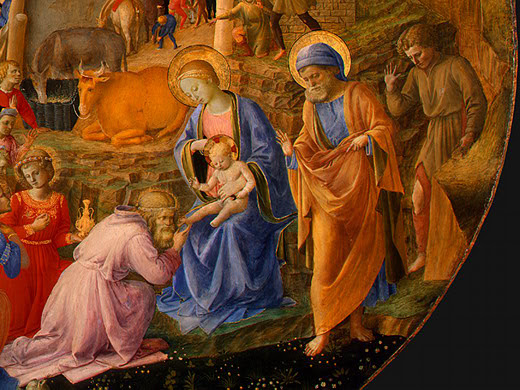 WHAT is little known or remembered is the consequence which brought death to the visiting King the very night of the Child Christ's birth.

This old King had carried forth the gift of former impulses past - conceded now to the reign and manner of his Holy Superior.

It was as though a starlit planet had disappeared from the sky - even though all the talk was of new constellations to be revealed... and the old planet faded and was quick forgotten.

Who was this old King? And what did he represent in ages now given to veils? And why did he slip into fable, far from history’s reach? Emissary of the former Christ, beloved of the Ancient Realm, a sage whose life had spanned some hundreds of years, a master among men who had been both guardian and revealer of his time; yet he was not to live past the infant's coming, and bade not to see the tensions beyond.

Miramuse: the velvet gentleman. Velvet cloth, made from silk from the Orient, was available then - a bed of fine fibers like no other, that mimicked the weaving of pulled rugs in miniature grain - this cloth he wore, and it shimmered as he moved. He also had a private trade in the same, along with various exotic imports - so many exquisite high crafts of inlaid pearl, gold, metal smithing, strong yet light fine fabrics, animal husbandry producing curious pelts; marvelous tapestries depicting visions of sorts; dainty and salty foods which were pleasing and medicinal to take; remedies and tonics that were sweet but not corruptive; oils, fragrances and purgatives, sealed with wax and delivered in gold; manuscripts of secrets - as to the taming of beasts and the taming of man; recipes and instructions in simple key and script - so plain it was difficult to find the value therein; tools of Astronomy and Gastronomy; harbors with ships stocked in marvelous trade.

This was a finer time than is imagined today - one of subtle beauties and tastes that were rich and quick to fill senses, imagination and even soul, a period where there was a finery and grace depicted through the arts and sciences - in contrast to the violence about, which was not so much barbarous as it was pervertedly epicureal also - they found a hundred ways to kill a man as if this were an art form as well.


'Modern man' of those days, considered himself at the apex of civilized behavior - and this attitude of mind and being was prevalent throughout every continent.

At the time of the Christ Child's birth it was assumed that the standing of human civilization and development thereof, was almost, if not already, complete. Even certain trade relations were so amicable that the nations prided themselves on a sophistication that could take in the finer aspects of the other's culture in respect and beneficiary.

Whilst there were slaves and the military, the popular thought of this day was of the organization of this brute force ('brute' being meant literally) - which was again a matter of superior 'civilized' pride as well.

In many respects society had excelled in its thinking, its organizations, engineering, and peculiar fastidiousness - working with but raw materials, so to speak, being devoid of the old clairvoyance to guide it, and too young to fathom the electrical technologies to come - caught in a time of mediocrity of opportunity and trying to make the most of it.

You could purchase countless sweet cordials, each with a delicate and different flavor; but you could not see the mystery in the water, or the possible perils it could hold either.

'Decorum' was the word of that day; and with this emphasis of society came snobbery. Pure racism or religious bias is understandable - not condonable but quite natural to the unevolved. However snobbery is but a perverted value of self and self worth - it has no basis in real difference or concern. Although it may sound as trite as its bearers, it is in fact a very potent agent of evil, for it damages all parts of the individual who is supported by its frame.

Snobbery is literally a form of madness. Madness often comes of selfishness, and the assumptions of snobbery are both irrational and self-gratifying - an unfortunate spin-off from a 'discerning' society that has truly come so far with so little, in a world steeped in a materialism that is stifling the soul life.

You see, whimsy preceded sophistication and came from a world that even predated romance. Whimsy is juvenile (in the real sense of the word, i.e. of Jove) being enthralled, joyful, excited in the collaborations of life - too captivated by pure love to be self serving, open and predisposed to almost any event that comes along, a time of noble ideals and concerns - an age to which we are only now returning.
What was to become the invisible planet still actually remains - yet not palpably so. Its influence does not infiltrate, its presence no longer permeates - a significant loss, a historical catalyst. It was the first rock at the mouth of the cavern-tomb - only that the rock was a planet removing itself, so that the light could infill the cavity within.

As with all else this planet and its presence was of Christ's own making firstly - rendered redundant through a complex necessity, deliberately disabled from its participation and contribution to this sphere.

This was a willingly given gift - a true act of self sacrifice and self denial for the betterment of this ornate World too immature for its offerings. 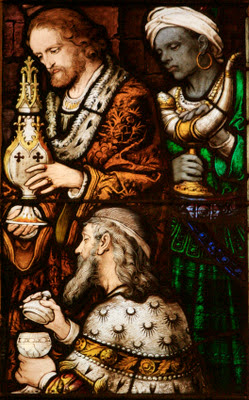 The very Gods seed and bead and embellish their creations; but not before they have animated them with a sturdy and pure life that is resilient to contamination.
Beware snobbery, for it has false attributes and brings nothing good.

This Christmas message has a theme to it of the gift of withdrawal - that of holding back and making way; of knowing when it is your time to speak or to be, and when it is not.

The rock had to roll for the light to come in.

The World shuddered and sighed - the birth was complete - the Christ Child had a mission to amalgamate a dismembered world and make it whole again.

[How many Wise Men were there? The Gospel tells of three gifts and so we assume three. The ancient Nestorian teachings in the The Book of the Bee, state that there were twelve.The three Magi visited when Jesus was a child, not a newborn. But did others visit at the time of the Birth? This is case with the old King, spoken of above. -Ed]