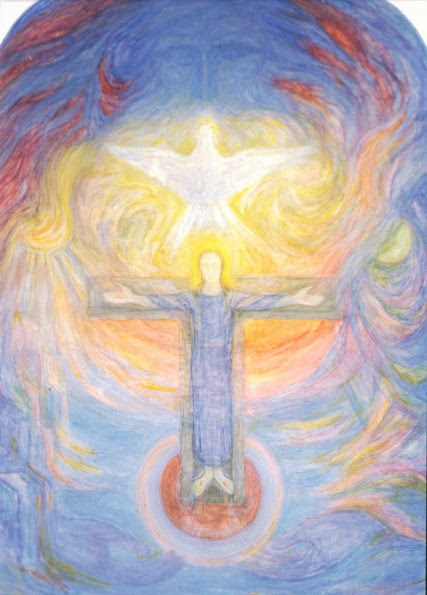 EVERY experience that had been trialed by men, was known to our Beloved Christ.

Furthermore, when He labored with the draughts of unconsciousness that blew in from death's quarter and relaxed His now tiring form, His Life proceeded forth.

With this procession in review - the now-again living story of His Life up until that moment - it did not come as with but in an instant and pass in equal time. It came and was known for a day, then stayed in the Heavenly recall.

This revelatory mass of collected events, being uppermost then private to Christ, was not just with the bearing of this earthly Life known prior, it was moreso of all Life known by Him up until then.

So amidst the agonies, this gentle King was reunited with Himself, gathering in such episodes and events that truly had been long dismissed or disarrayed….as the eons unfurled one by one, in glorious order to a symphony of time that had begun from the sweetest of notes, to follow with dramatic fantastic plays (and interludes), one by one, one by one.

Muttering to Himself in the cold and the dark, awash with these memories of times before Time, the black night was now emblazoned with these scenes, scenes that only He could have drawn together - being at each of course, being that one remaining constant to all.

If we had seen these pictures as He, would we have known what it was we were seeing?- The rise and fall of many worlds, the perimeters of the Heavenly Worlds, and those places which even to Christ Himself had been ill-defined - either too young or too old to be clothed apparently at their time.

Every face of every being came before Him.

Every soul of Man came also.
Every Love and every Hope He had Known.
Infancy, inexperience and then the gathering
of experience was so recalled.
Every star kissed - once again.
Every bead and droplet formed all over.
Every departure and return to our Dear Father.
Came the morning of His Death,
He had remembered.