Panning for gold,
Panning for silver;
Bringing up much fish,
Much silver and gold.

The act of typing can 'eke' one into the clear of thought mind, sufficiently to respond to another's dictation. It is a translative concentration, which is trained to pick up and put down; and in certain rhythm, does so.


The typist is still free to think, or to stop, for that matter. It simply implies, that she/he may also assume the typing mode and perform the task of transference. THOUGHTS are elusive unless directed into something, i.e. experience, past experience (recall). Formative speculation on the other hand, is like swimming in the ocean. Contemplation is directional and requires the necessary impulses within the man, who desires to go further.


Prayer supersedes the two, as it is with intent and larger impulses, which are both directed and rooted in higher aspiration. Prayer is always caught by that which it is characteristically designed to seek out; and always answered, for this is the nature of any directional impulse: it does not stream out indefinitely. One may assume that prayer is of the male aspect, whilst meditation, of the female.

One may rightfully come to feel dignity in thus proclaiming oneself to be a student of the mysteries; that one has made the contact, and then the affirmation that one is intent to inquire further. That there is conviction and seriousness, and with this a commensurate love and respect for their humanity; for there is dignity in this the higher motivation.

Leaving the world of men means to say, that one leaves the world of fragmented arguments and rifts which separate man from the higher worlds, leaving them to their respective regions and going further afield in seeking out a resolution for their very plight (of the moment).


Sometimes one does need go a little further than one's own home in order to administer a required remedy for those who reside, that are ill and wanting. It does not mean that one has forsaken those who cannot venture out for themselves, by this the pilgrimage for those otherwise inconsolable.

If one wishes to adopt strength of character and become sturdy in the world, whilst prepared to meet any other, then it is with much diverse opposition and protest that they shall firstly be persuaded against. For one's joy may be known to another as irksome labor, because the latter has not the qualifications of interpretation, has not the initial introductions that he might understand a heavenly translation. The confusion of those who mock, jeer and object, is making this apparent by such wild gesticulation. For who would really be concerned that another might seek that which is good and holy?- Only the man who has not the taste, nor the sight, nor the feeling for such. For to those who have witnessed the spirit in being, they would not deny themselves in guileful misinterpretation.


At times hate may seize a man and come before him and that which he essentially longs for; for hate is hateful, just as sorrow is sorrowful, by nature. This is all they know to offer and bring to the humanity that accepts them. Nonetheless, those who entertain hate and have stained their heart thereby, and all that issues from deed and from mouth have foul example to live by, and perceive not the grand alternative.


"Cast hate from your heart" is the message again and again. The cynical are so saturated and overcome by hateful expression. Rather than by constructive, objective, perceptive inquiry, the cynic offers no more than destructive criticism, which is motivated by his hateful condition.


By the way, have you ever considered that raving egotism coupled with self gratification is but another form of incest? It certainly is. At the expense of yourself, your dealings with your closest family member, yourself, can become by nature, incestuous - but that is another commentary.

If a man on a street corner asks of you for a coin and you have a coin, then you may give it to him and impart also some measure of kindness. Without the kindly intent, one might as well offer a shrivelled pea, for it is truly the kindness which he seeks, as this and not the coin shall help him from this sorry condition.


The man who will rob you of your coin does not ask for an act of kindness, as he would prefer to address you with great imposition. He seeks out your money and believes that he might take it. And taken in such a way, it becomes as burning poison. It shall bring him no happiness and no relief.


We pity the robber and think kindly of the beggar. We do not encourage the violent, and we resist their ruthless ways of disregard. However, it is not condescending to offer charity to one who has not what we have and asks us for small piece.


Equally so, one cannot abide by the man who should try to take the gold from the teaching - the one who does violently press upon you for such. We are all beggars in the eyes of Heaven. We are not at liberty to take anything for ourselves simply to satisfy some ungrateful urge, some lower passion.


We are all beggars in want of charity in need of Divine Grace and sustenance. We are as one beggar to another - and as helpless as babes. We have not the power of ourselves to prevail, and this is why we must repeatedly consult with those who are so much the stronger and wiser than we. If we are to give back only disrespect and contempt, then pity us. Pity he who would become only as a robber.


This is why we ask in humility, we do not demand what we cannot demand - wasted affirmations, poised for refusal. The embittered become so much more embittered, when they learn of their unfrequented callings, until they cry out from those dark and hidden places - whether with urgent pain or whether from solitude. He does this because of the desperate realization that he no longer wants to conceal himself from that which supports and sustains him.


What for, to try to steal that which is duly granted? As the long lost prince who has regained his identity and returns to claim the castle, we too may claim our inheritance, with many a battle and confrontation along the perilous trek made back.

And yes it is true that one and one make two, as far as it goes, except for this: one may not be solely one at all. One might hold within it a key, which when matched with another one, does make for three in the equation. And so we have 1/potential + 1/potential (more precisely 1(male symbol) /potential + (female symbol)/potential) = 1(male symbol) or 1(female symbol) (or even more) plus the original two. Mathematics relates to that which is fixed and perceptible in time on that particular level of perception, but life itself is never fragmented and held out from its contributing whole. The equation of 1 and 1 does not relate merely to biology. Equally so, one may never maintain that we are what we are. For we are with keys of potential and are as ever in flux; and we are not as defined - just as the fleeting intellect that presumes so.


Definitions may only take one so far. They are useful of course, more than that they can be supreme examples and representations, but are never to be confused with reality. An interpretation of reality is not the reality which it seeks to define or interpret.


We are again reminded of our place and our so limited comprehension. But not to the point of distress or dismissal and not to the argument that conjecture and study is pointless or without aim. For although one may never embrace the whole of the Cosmic Creation, one may certainly get close. Thus the greatness of striving to attempt this climb, on this our highest mountain - and let no man from the base try to tell you of the view from the top. 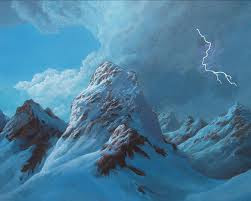