The Temperaments & the Elements- 11th September 1991

THE rules of the temperaments are the same as those which govern the characteristic tendencies peculiar to a race. The 'swabhava' or 'essential essence of characteristics' is much governed according to the conditions at birth whereupon the man has much decided upon, entering into this or that country with those attributes required for survival and adaptation.

This is based on geographical location in respect to the poles and the climate that is to be endured, and also those 'blood' characteristics which are formed over many, many generations.

One can witness many exceptions within a rule where an individual has properties and strength of will which in time will override those commanding characteristics and replace certain others pertaining to other factors, namely:

a) Geographical switch in location of permanency.
b) Past life tendency (as a magnet) drawing forth those former tendencies.
c) Health and the nature of the physical condition responsive to those conditions.
d) Ego-identity making conscious application which redefines and redirects those channeled forces - pertaining to certain attributes and modi operandi inherent and replaced.


Many a soul may argue that racially speaking they are in the wrong place as regards former communities in former localities, which best suited. However, compensatory desires are forever dictated by the soul of the individual which specifically destines itself long before birth at that particular region of the Globe. One seeks experience which is of a different variety and not mere repetition, and although some measure of tendency to repetition of flow-on can, from life to life, propel like souls in waves upon return into re-embodiment, this is not the chief concern of any incarnating individual.

However, this is not to say that the defines of a particular race and their constitution is the complete man in toto. One cannot argue though, that there are no differences between strength and agility, thinking forces and reception, cognition of concepts and so forth.

Many of the treasures of the heavens are received and brought with us on the journey back into incarnation. The re-embodying ego divines in pre-earth life that which is best suited in temperament, just as also he is depicted with those racial characteristics, time of birth and location upon which he is attracted to in either great sympathetic bonds, or conversely through former antipathetic reactions, into those conditions which are the very opposite to his former existence.

The question - when one comes to either thinking in terms of higher or lower aspects of tendencies and characteristics of man - is whether or not these conditions which are adopted for a time are so set as they are unchangeable.
One must consider the factors which make for opportunities for certain characteristics to flourish and perform- namely the starry conditions at that time, which at intervals incite more or less of those commanding characteristics into activity. For being born of those starry impulses and channeling thus thereby, one attains certain qualities which pertain directly to cosmic influences. From these movements and conditions one is inflamed in particular ways, and is either receptive to the extreme or by the very nature of the man, unreceptive to such influences.

So if one is predisposed to receptivity in a given manner and has adopted a 'blood' temperament or a personality temperament or a soul temperament, one is exposed to set patterns of determined response and interaction which befits that particular host of influences. It may be said here that the three need not correspond but are in fact usually at contrast with each other. Added to this certain changes may be effected where modification is made and certain qualities are exchanged for others within an individual.

In the case of the attributes which are so imparted in racial 'blood' temperaments, one finds that the ego at given opportunities may redress the organism and rework those physical attributes inherited at birth. Also a shift in location will have certain effect, as the organism and the personality is so altered in response to those extraordinary conditions set before it. The changes are almost immediate and will alter throughout the generations who have settled in the newer region (even though their descent is from a totally different region) displaying characteristics peculiar to the new settlement.

The fiery influences so received and distributed throughout the nature of the personality are directed in like manner, but too may be reworked. As illness is a fine opportunity for great change to be effected within the physical constitution, so too are mishaps and marked changes in outer conditions wonderful opportunities for the temperament of the personality to begin to work anew on those adopted attributes. Depending on the level of the governing consciousness, one might find however that those 'blood' characteristics dominate and determine moreover the nature of the personality - it is a battle of balance and redress between the two as to which will be the determiner.

Thirdly there is the soul-temperament which is characteristic upon the impressions which were made as summation from previous experience. This is carried through and is usually depicted from the actual time of birth. Then there are tendencies working through from the past that may dominate, again depending on the strength of the consciousness and the desired activity thereof.

There is opportunity in the mode of the personality to qualify or balance such tendencies, explore or redress the former characteristics so impressed on the individual. But of course one must consider too the extraneous circumstances and their workings on the entire individual at any given point of time. The preferred characteristics so acquired might differ according to circumstances pertaining to the moment and certainly to the level of awareness presiding at that time.

Interestingly enough, if one is to separate the individual temperaments, namely four contrasting for the blood, four for the personality and four for the soul, when mixed with differing determinations, we come to twelve; and then so on into further multiplications.

It may be said that when one comes to consider the four elements which are manifest upon the earth as being in quality, that of the ether, that of the fire, that of the fluidic and that of the earth, one is disposed to an interpretation of those representations as being essential to the nature/characteristic of those qualities. However, in substance they are but one and the same - those physical representatives - save for the dominating principle of one or more of the commanding elemental influences. One may transcend another and one may work upon another and alter it accordingly. That the earth does swell with the water, that the water may quench the fire, that the fire may consume and translate the water to be released into the ether, that the ether may persuade and sustain the flame; that earth by its nature may contain the flame, that the ether by its nature might accommodate both particles of that which we recognize as condensation when earthbound.

The elemental qualities which work through and thus preside determinator in manifestation, are essential impulses permeating all matter, streaming in, in given avenues of design. Manifestation itself is plastic to these influences, and made characteristically quite different because of these four differing qualities.

So too with the elemental man. Form and structure as being representative of the physical interactions also does apply cohesively to the nature of those governing qualities which affect the higher realms. As all that which comprises our natural world, we too are plastic to the influences which preside and dominate certain aspects of our being. For change is imperative to growth and reproduction, to cycles and to evolution. Without such change there should be no interplay or receptivity within the cosmic persuasions - that the cosmic wheels may continue to turn.

When we look to the elemental impulses we are trying to decipher that which motivates and animates those essential properties in which we work in. In Cosmic terms this is true also. The hierarchies who are predominantly of the nature and characteristic of these qualities, impart to the surrounding 'stuff and fiber' of the higher and lower spheres, as representatives of that which is required by them and their respective impulses, to motivate (in permeation) that which is Creation. So the essential ingredients for manifestation are the essential four impulses of those elements, as witnessed in their workings upon the earth, received and working from yet higher properties of tendency.

Man shifts between aspects and is nourished by all modes of being. He, as incorporated within, is subject to larger patterns of received impulses, whilst is also at liberty to receive and negate, in part, certain influences respective directly to his sphere of operation. However, nothing remains the same as this is the requirement satisfied by the workings of all four influences so set in place. As such, he shall come to the properties of all four and come to decipher and govern those influences which are to be selected and correct- through grappling come to acquired mastery, understanding the appropriate times for appropriate influence. For as they are building influences throughout the earthly kingdom itself - these four qualities, these elemental values - one may harmoniously direct such qualities as pertinent, within the constitution of the organism and soul of Man.

The knowledge of such elements thus far is through individual experience of those capabilities which are permeated and expressing throughout - featuring one singly at a time, within the differing modes of consciousness and being. However, in future times when the expressions are spent and well learnt, man will have greater freedom in the creative channeling of such influences; the same creativity which the natural kingdoms have been born of. 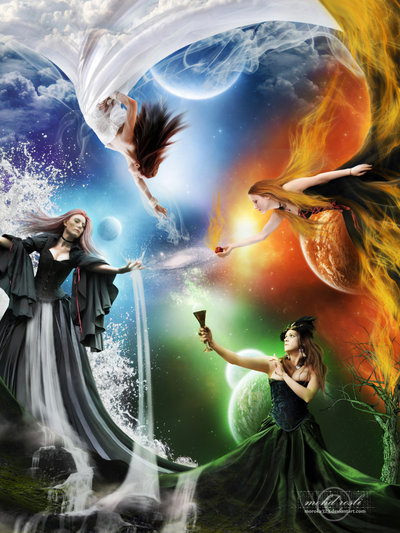 Elemental gods have been personified, as in the Gods Shiva (and his curry-eating followers), Vishnu, and Brahma.

The virtues are to the elements as colors are to the light. The relationship between the two are of influences respective, but not of the same. For the virtues are finally 'sapped' in excretion when manifestation comes to periods of inanimate rest, and distilled as it were, from that life which was perpetuated by the influences of those elemental impulses. And they are saved and so withdrawn, for their substance is from yet higher realms, which are essential to the characteristics which are effected through the impulses so given. We may come to know and exhibit, and receive that which is a virtue by virtue of the elemental precipitator and his gift to manifestation for the workings thereof. But the cosmic substance of Divine inclination is not imparted from the source of the elemental persuasion. It is affected and made vehicle, but is not the source.

As man comes to know of the driving forces that cohesively make up the grand interplay of those strands of life which are so connected, he may come to distinguish the properties of each elemental influence and so direct the impulses according to his design. Expression within the perimeters of the particular, gives essential firsthand experience of such qualities, as exhibited as certain characteristics imbued, featured at times through phases of his consciousness and constitution.