THE figure 8 is a fascinating study, self-evident in formation with marvelous applications throughout nature. The vortex within the cross-section, if seen three-dimensionally, powers down and the 'eight' spirals down beneath it. [Diagram]
The law of repulsion in the astral and co-astral realms is in fact utilizing perfect attraction with the form of the figure 8. Perimeters and boundaries are there on every level throughout manifestation, reaching out into higher spheres and realms that are guided with magnetic revolution and defined by inert peripheries. Understand that dissolution or chaos would resume, were it not for such confines of structure.


First point - accept definitive restrictions within space.
Trilaterally however, we come to point two: Picture yourself walking in one direction until your form becomes smaller and smaller. One could assume that distance has been traveled. Now your form comes to the wall of the perimeter, that restricted area - there is no further to travel, and you turn around, firstly to find that you have been traveling backwards from the desired destination (the further out the further in); and secondly upon the point of realization your figure has resumed its original size and now is back to the beginning. And so the doctrine of cycles truly begins! We go out, project forth - we bounce back to the start.


The circle seeks perfection and is content. Content is the circle. Interrupt the circle and in its efforts to re-form, another can be spawned, coexisting with the first, eg. one cell, two cells - this is the activity of creation. The central point, the cross-section of the 8 is akin now to a laya-centre, perpetuating activity, when witnessed three-dimensionally.

The laws of karma pursue the figure 8 course. You are central to you actions, now first the circle goes out with action, reaches its limit and turns to reverse (as perimeter law would have it), back to the center again - now accelerated force carries on onto a second circle (this being repercussion), the effect reaches its predestined perimeter, and bounces back to the central point. This is not motivation, but rather function. One cell, two cells.
Homeopathy completes the 8 course.

See if the biodynamic people use essence of fruit to water their fruit trees (homoeopathically, as with insecticide preparations) - it is a little like yogurt or culturing to influence in this way.


All laws can apply in reverse - this is again why the figure 8 is explained. Ancient wisdom speaks of a future age when one could grow younger, rather than 'wear down and out', so to speak.


Folk that try to interrupt cell structures and so forth are trying to redirect certain courses to bend to their will and intervention, but the technique of utilizing reversal laws does not intrinsically interfere with the nature of any given life. Therefore we suggest that it is acceptable.


Herein is the meaning of the phrase 'turning it around'. People's thinking comes into the realm of boundaries also, except that the point to which they must reach before returning, is quite often not achieved. If one had the skill to guide a depressed man, it would not be therapy to attempt to pull him away from his depression. That would be very much like grabbing someone whose arm is stuck in a lift door, and trying to wrench the body away; tearing the arm as you go. One should lead the man further into the depression (with skilled assistance) until that point is exhausted and the process comes to that point of reversal. Whatever the incident or trauma was, that has a hold on the tortured mind, can literally be worked through to completion.


Devils do not like to be seen or openly confronted, lest they be seen as they really are. Sad to say that with the ill-minded, the impulse is to prematurely retreat from their particular devil, which in effect (8) causes a second and stronger reaction against that particular problematic devil. Sometimes it really must hurt before one can heal and courage is needed to override any impulse that is stimulated for retreat. Again the phrase, "I must think this through".


Joggers illustrate such power when they can work through exhaustion to its respective end-point, and regain the most wonderful (though not indefinite) renewal of energy to drive them yet further.

"Out from the depths, I cried!": this is almost necessity when taken in the context of the above script. From this lowly point comes the opportunity and recompense for courage in experience. Oh, courageous souls who endure! Remember all are looked on in love and kindness. The length and breadth of experience is totally necessary in soul-striving.


Crystallisation is another example of the law of reversal. When the point of dissolution has reached a certain limit, there follows the reversal, thus the impacted explosion of form returns.

This is transmutation and evolution, and can be applied to all phases, conditions and realms of manifestation. Indisputable, immutable laws must fall in compliance with each other, of course, unless the Great One changes His Mind tomorrow.


Pralaya and Manvantara work on this principle (8). It is not just the law of opposites to which we refer. It is the manifestation of the law of limitations and reversal - specific limitations and the point to that which can be bounced back upon; and then to the door of the transmuted sequence.

The alchemist in order to produce his gold had to begin from the base properties of gold, taking it to its limits, to return it to its original condition. . . and here is the key, when we say 'return it' for all manifestations are truly beginning from the highest point in the spectrum, even if their representation functions on its respective lower for a time. It could not be otherwise. The higher form dilutes to its lowest perimeter in manifesting, the soul of the fallen is that of the angel - turn it around, turn it around!


Having spoken of 8 and the law of repulsion and limitation, there is one projection however, that oversteps all boundaries, and does not return - Love is limitless, literally.
This is the power of love, sustaining and permeating throughout, for love is limitless and knows no boundaries, this is significant; and we shall talk further of this at some length when you have more time.
Posted by 888 at Thursday, March 19, 2009 No comments: Links to this post

THE ancients when looking heavenwards would picture the starry mass above, connected as it were by a frame of infinite threads; each orb held in suspension, woven by the actions of another. Planets, stars, moons and smaller comets- interdependent with orbits and individual space defined within the network maze, held within. Like the egg, with the yolk in albumen, we are held in suspension - and it is absolute illusion to perceive or believe otherwise. 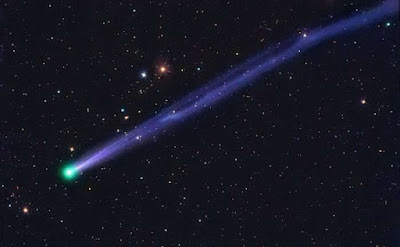 Rarely do people fix their eyes on the stars today. If they come to acknowledge them it is with the perception of tiny individual points of light, dispersed far away. Our eyes are simply not powerful enough to appreciate the splendor of these heavenly bodies, nor their connecting paths and beams that blaze trails from one to another, to another - and so it goes. Such it is with the concept of Brotherhood.
Posted by 888 at Tuesday, March 17, 2009 1 comment: Links to this post