Dancing in the Ten Dark Worlds 3

3. Fear of being frozen (paralytic - not being able to execute the will)

The forces implicated here are the very ones which are working for peace and containment - the same forces which have the power to appease and curtail the ferocity of will as it is brought into life and executed by ourselves.

It is understandable therefore that we might well become frightened at the prospect of this element of peace containing us to the point of inactivity. The very presence of this influence (described as being apparent in the middle finger of the active hand) seems contrary to the overall nature of the active hand. It suggests an inactivity, doesn't it? Yet oddly enough, peace is anything but that. Peace is not inactivity at all, but a higher occurrence determining the action. When conditions come to Peace it is not a static non-occurrence, there is in fact an infilling of beings and virtue, of possibilities and heavenly grace. Peace is busy in the unseen, but also in the quiet. Peace allows a saturation of such heavenly force to bless what it is that we would have be. 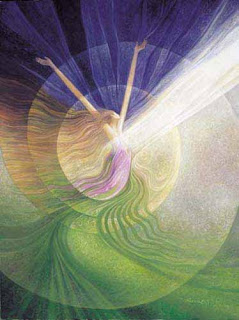 To the individual who cannot yet perceive the unseen reason, there can be a mistaken sense in the soul that peace is nonsense. This individual is often provoked by their fear which follows to be ever busy and never at rest, consequently tiring also those around them. They may suffer night-frights or nightmares, chronic restlessness and undue speech. They are very fearful of having a period of inactivity set upon them. Moreover, there can be a willfulness which has in the past gone unchecked. If we review the work on the Rosary* we can see that the greater value of this virtue is in relation to the active will. The problem therefore (that the individual suffers who holds the fear of being frozen) is one where there has been little effort made to contain and hold back the wills and wants of self to any measure.

*This list, unlike the present, alternates between the dominant and passive hands.
4
Posted by 888 at Tuesday, March 29, 2011

Email ThisBlogThis!Share to TwitterShare to FacebookShare to Pinterest
Labels: Rosary