BECAUSE there is no such thing as cessation, because nothing ever stops, comes to an indefinite halt, we have change - small change, loose change and big changes.

Coexistence requires laws of definition and boundary, definitive laws which imply definite limits in which one may operate at a given time. Movement from one set of limitations to another is change, and there is no such thing as change for change's sake. In this sense all that is and is to be is never chance, as sequences of opportunity within expression and exploration are structured and flow from one to another progressively, regardless of one's perception of the multifaceted laws one is interred in. 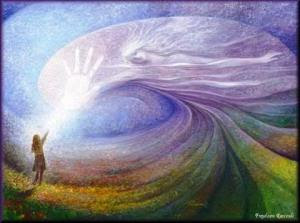 The law of limitations and the law of change- one is preceded by the other. Such laws are example of greater and smaller laws of the same. This is spiritual science. In time, with observation of such rhythms of the laws of change and limitation, one may begin to understand the necessary relationships one has to all and the polite and orderly workings of the conspiring superstructure that supports coexistence.

Recognizing duties in life is exemplified by the attitude of obeisance to given laws. Respect and regard for all life and her participants is experience of truth and reality. Denial of laws and subsequent rudeness of attitude is but self-delusion, which ever way it cuts. For consciousness does not determine that sphere of activity it dwells in, consciousness has choice to lovingly embrace or ignore selectively. There is a certain uprightness one may feel when certain truths and laws of Spiritual Science are experienced; very much akin to the uprightness and firmness of a tree.

Steadfastness in a sea of change is a useful stance in the world, as the world itself presents daily many a test and a challenge to our concepts that infill our fiber and light our inspiration. Fixing one's roots in the good earth of morality, watered with heavenly impulses bathed in the golden glow of our Father's countenance- there is much to be learnt and mastered accordingly to the principles of right thinking, right knowledge and right application. Fortunately also there is that which a man may recognize immediately for himself, in which he 'knows' something to be true and he is glad. That truth can resound through his being so loudly that echoes from past experience sing out and gratitude is awash, bringing tears to that soul who feels the certainty and the revelation that the experience of Truth brings.

This is the experience we seek to learn by: the essential and most powerful truths. One can really tell by this yardstick what is correct for them alone. No other can impose or incite, that it is a true recollection of inner reality.

Daily we practice wakefulness, aligning, attuning and cooperating with a consciousness that shall one day be finely strengthened accordingly. And this does require work: work in the form of attempt and failure, with a history of practice - simply getting it right! The practice itself should and cannot be missed out or replaced by quick and easy measure, like the ten day world discovery tour!

It is well and good if others measure their wisdom as greater than yours. In truth one would certainly hope that there is the possibility that greater wisdom is enjoyed by other folk somewhere in the world. But personally the only impression one can effect upon another is by example. There is no fee or latitude whereby one individual may do the work of another.

Some individuals require that they be entertained with cake and some with biscuits – for some, offerings are given to personal choice and personal freedom. If an individual commands that respect and loyalty be offered, then it is preferably commanded by example and same attitude. There are of course those who set themselves upon high station and feel the need to be adored and ask for unequal relations man to man. This speaks to us of uncertainties and misguided triumphs, or perhaps roles and games which can be innocently challenged or wickedly contrived.

Christ does not talk down to Man, if anything He 'talks him up'. He desires that Man be exalted and shall rise to greet Him, that arm in arm one may explore the worlds together in friendship. Beware of the exalted who rise at another's expense.
Posted by Bruce at Saturday, July 25, 2009