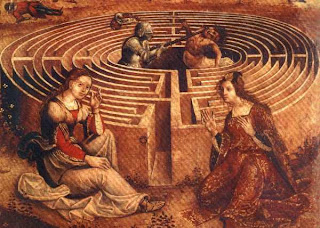 THE labyrinth of old was a term for the relationship of men's minds to worldly conditions, whereby all individuals plunge into unknown depths amidst many a peril, all the while to strive for escape from confounding confines.

To enter into such a labyrinth one was usually equipped with armor and sword, a cross over the breastplate, a bag filled with courage and another filled with foodstuff to appease the dragon/beasties.

The knights of the Crusades were empowered with a vision, a vision for humanity that held that whatever the circumstance, their only Lord and King: our Christ, would be at their side. Fear was cast down, and so too the notions of personal victory and achievement, for such courage was unshakable when armed with the knowledge that only love prevails throughout eternity.

Fear suggests to us that our perceived outcome which lies in the future will be less than happy. From this we learn to dread such a future before we are there. For a soul which is held frozen by Fear is indeed caught deep within the Labyrinth, turning this way and that, unable to pass through any doors which offer exit- separate and alone, the lamplight of Christ extinguished.

Of all the woes in earthly existence, Fear is paramount, Fear is the pivot. Fear may prompt a man to rash action; terror may inhibit the soul from right and proper judgment. Fear whispers of death and brings paralysis. Fear is the demon itself, the deceitful messenger who parades falsely in the guise of sorrow, and is not to be entertained or believed.

Fear is the king of masquerade. Such masquerade all demons do mimic, as imps at the feet of their king, whilst that king goes after the hearts of men.

We all know the icy grasp of this formidable Fear. He thrives on the attention of men. He has no substance without. Careful and prudent caution does not require Fear to awaken the individual to conditions which are unsavoury to him. This king of the demons is only worthy of contempt and is to be radically shunned at every encounter.

There is but one who this devil does fall at the feet of, namely our Christ. Herein is a mystery of mysteries: that Fear himself truly does love the works and labor of Christ and therefore all of the kingdoms encompassed in His great world, but continues to provoke such great evil hiccups in His scheme. All beings great and lesser do love and know our Master, as He knows and loves them with divine intent- their very existence is dependent on His mercy. It could not be otherwise.

So if one confronts Fear, be reminded of the truth that Christ is ever before you, awaiting in that unknown future, and at your side as no other; having cradled you ere time was nurtured, in His bosom.

When one is alarmed by possible consequence one is awakened to great change, following which will be further great change. For nothing in the world remains still, no thing remains unmarked by change. True comfort to shelter and buffer such change must necessarily come from within. For the outer world is in continual flux and flow, whereas the inner reality becomes less and less temporal the further in one goes.

When the demon of Fear is invoked, once again, commend him to Christ, with a firm and exacting command, in the knowledge that he is truly to be pitied. As he, by his nature, is to be denied company with Man in such days to come, when his thirst shall be unquenched, and the stronghold of faith in humanity shall cast him back into that labyrinth from whence he came.