Every morning the birds are excited to see the Sunrise. It is as though they simply had not really been expecting it. If you listen to their chatter you cannot miss the excitement and cheer in the revelry of this morning event. It is not just a celebration but the celebration. Even if you cannot hear all of it or speak the bird's language, you can hear their intensity and fervent joy when first light begins to brighten.

Birds have a very good memory. One should wonder why it is that the event of the Sunrise has not been predicted by them and therefore an experience like any other. You do not hear such excitement from them when it is exceedingly sunny, or rainy, or windy. No, this happy chatter is at the Sun's dawning - and if you listen hard you will find, that they are surprised if anything, that the new day has come.

Of course it is one thing to have memory and another to have expectation because of it. Birds do have the faculty of expectation and assumption, but it is not upon them when it comes to taking the rising of the Sun for granted.

And it is that they have very long memories indeed - their collective memory goes back to a time when the Sun was in darkness for three days long. And it was so dark and so grim that it might not have ever come back. This is something they relive nightly.

The soul of the World had become very tired at the time of Christ's Incarnation. The whole project and plan was beginning to fall away. From Heaven's perspective it was a matter of the sickness of Sin being so strong upon Man that the only healthy thing to do was to shut it all down. Not so much a judgment for the sake of disciplining the corruption, but more for the caring of the souls being fouled and marred a'further.

Outcomes could have been very different, and the Sun's rays may not have been felt upon our Earth, but rather a void of perpetual dimness could have seen out the final dying days.

The birds do not exactly think in this way - they simply marvel that the light is returning. There is a true relief and talk about this occasion; for what we take for granted, they do not.

Angels perform routine tasks so well, but their expectations are not pre-considered. There is the anomaly. Men may be habitual in minor ways, but not with the exactness an Angel will have; not even close. They are somewhat haphazard, unpredictable and of course, can be imaginatively creative. Yet the man fundamentally has expectations which are reoccurring, and his core behaviors come from that. Angels are very good at expecting the unexpected. In the ever changing Spiritual Worlds you need to understand fluid change in order to navigate what is around you. Whilst they are set to a particular and adherent to the rhythm of the particular, they are also 'aware' in ways that we have not come to, in the mindset of Humanity. An Angel can be on the ready for an event - say an accident for example - because they are not in the routine mind, but outside of it.

We as men simply do not see things coming and it is a shock when change of any kind occurs. We may adapt but it takes time. We may be able to be creative and new, but not really equipped to use it. We may believe that we are more self conscious than any other being in the Universe, but this is because we are routinely thinking and not realizing that which is beyond our immediate knowledge.

So if one is to commute and commune with the angelic beings around them, it can be that this principle of change is gifted to our understanding - at least a degree of it.

One of the keys to being in sync with the day, and placing your being and consciousness within a perfect time throughout the day, is also in this understanding of being prepared for the unexpected. How can one live in the present moment, if they are living also in expectation of the ones to come? How can you hear what another man is saying, if you are preempting his words or even thoughts before he has given them? And also, can we ourselves function at best, if we are but living the day before, rather than the one before us now? It is from the Angelic realm that we can learn the beginnings of fearlessness in the present moment, and change. And from there we can appreciate the elements of that which does change around us, and begin to see the merit of it where it lies.

This is not to say that we are to go against our own nature. Our own nature lives for the main part in the Spiritual Realms, and although it is not developed at present in perceiving or expecting change, it is still something intrinsic to our own beings, as much as it is to the friends that we have that live the consciousness well.

Not all beings-without-bodies (as in fleshly bodies) are adept at considering change. The elemental world - gnomes for example - do not like change and are ill prepared for it. In this Mankind is more like the Gnome than the Angel at present! At the far end of the extreme, you will find that demonic beings who create much havoc where they can, are completely resistant to change and therein lies their problem and incompatibility with the rest of the score.

Evil likes to force its own measure and uniformity because it itself cannot adapt. Evil by its own nature becomes but a shrinking consciousness that eventually expires on its own.

At the Sunrise it is the best of times to contemplate new possibilities, change and readiness. We hear you comment that they are all different each morning - some vivid, some pale, some grey, some astounding - and this comment about the Sunrise itself being different really echoes the false notion that the Sunrise itself should ever be the same, or a repeat of another.

It is good to be able to reasonably predict certain events of course - but only as a tool, and not a compass to the mind itself. Good thinking requires more than the learning of habitual repetition. Good thinking is alive to the moment, and without the fear of the unknown. And it will come, it will come. 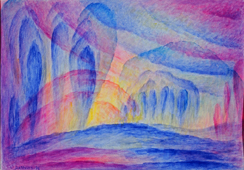