DEEP in the crevice of death, sunk through the filter of a deep and porous sadness, sat an almighty being, undefeated, yet depressed with the weight of an agued humanity. All Heaven could feel the woes of this World; same World which had swallowed their Creator God whole.

In the vacuuminous darkness, bestole wretchedness and wickedness – the same way that the opportunistic germs will gather to a goodness exposed - and as with an artificial pride of possibility, the evil collected upon itself and presented itself foolishly to Christ. Evil danced its mocking, its sneering and its seducing. Let loose now in our Lord's absence, the sprites of Satan infiltrated above, emptying out from the seething containments below.


Angels do cover your ears!

For the cursing without is infective with sin!

Women, stay close to your cots,

And pray over them;

And men, tie roofs to your houses,

Lest you lose all within!


See where there is bickering?

This is where the sin enters in.

See where there is harrowing?

This is where the sin begins.

See where there is much cursing?


Cover yourselves from tempestuous behavior;

Shelter beneath love dear ones,

And Father God will keep you well!

But on the day of the Crucifixion the eggs turned black, though yet still soft and warm from burgeoned fowl. Calves were stillborn and other mammals deformed. Crops cut down, with blight at the kernel, hard and dry and shriveled within; trees, cheerless and lank, splintered into premature kindling. Wells discharged septic, whilst even too the holy fonts then stank. Wherever there was new life to be had, in replacement there laughed Death. Death, the very antithesis of Christ, was to be known by Him.

So scorned are our goodly characters! So injured the Graces which uphold us! How must our Christ fathom this: the disease of His Life and promise of ruin? How does He turn back upon Himself and leave us so? Return dear Lord! Return you must! For we are now orphaned in this World, without You!

In the olden days - those days before the new Life of Christ - there were sagely men and sporting men, debating men, beguiling men; there were children intent upon given tasks, and children who applied and contested their talents; but there was nothing beyond the practicalities ... there was not the capacity for playfulness and its pure humor. This World did not play, it did not comprehend a joke. And why there be cheer, in this dark orb then Christless and misgiven?

Affixed to stars, hope strands in gossamer growth. Ribbons woven, banded the Globe in banners preempting the return of our Lord. For one startled episode, our angelic cooperatives hesitated and had withdrew. How forlorn it was, as they amassed at the perimeters of the orb, holding back from their beloved like so, undirected and confused in such deep and darkened sorrow.

Then they heard His voice, as familiar as ever before! Instructing them well to go gather the hope and discharge it then into the World. They saw Him not, yet knew His Presence felt; there but not there, He was a 'ghost ' amongst His own. 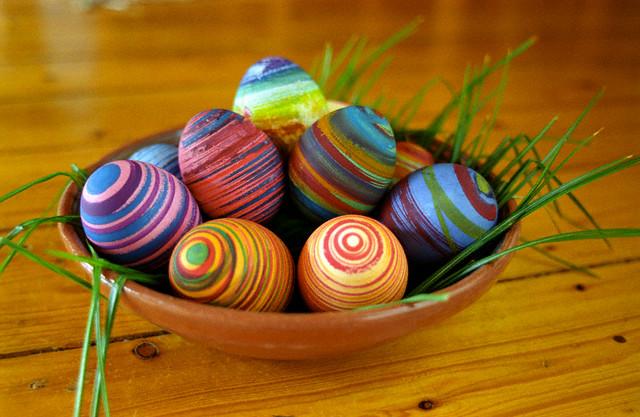 Even to this day men are as ghostly to their spiritual friends. For still there is much hidden about a man, least obvious to himself, in seed bespeckling the aura.
Colors pass over a man, just as the sunrise infiltrates the morning sky. A man's true aura (which is composite of many stars) has the subtle beauty that the lower astral cannot represent. The larger body in which we are contained, is of wholeness, and we may travel to parts of it, yet snug fit in this womb of auric light. And all of this is held within the ego - inverse we are - Cosmos inversed. And this is your Easter egg - verily, the Easter ego of Man! In egg-like form the ego contains the concentrate of the greater albuminic aura, in which our consciousness is couched. Protected yet nourished from within, the inverse universe cradling the child-spirit-consciousness of God.

Because all things are so contained in the one [egg] we have in life therefore the presence to invoke duplication. Auras coexist in the same space and encompass the same length and breadth as do all others. All men share this, held within the greater auric egg of Christ. Captured within this same field of auric vitality are also the associated kingdoms in and around Man; therefore the substance and keys to all manifested forms, whilst also the interior knowledge of their nature, instinct and pneu is also there. Infinity, as distinct from time, exists in the reaches. And Man in both essence and possibility, safekept, is also there. This is your Easter egg - your Easter ego.


Of Springs to come,
And the new life's push;
Of generations born,
To the generation's rush;
Of material interludes,
With cosmic ports beyond;
Of beings most animate,
Giving love amongst their own;
Of fur and feathers,
And insects too,
Of fish and frond
And spore and dew -
Each life indwelling,
Now bearing more of the same,
In love, re-telling
This, the Eternal Name.

The fecundant urge to replenish and renew, this our fertility, was furbished with Christ's return. What did betake Him when He let death pass Him out from the gates of the physical body? And what of the body itself, so ennobled for awhile, yet infused with a passion too great to withstand in boneless sinew - and what of the heart also? What of the Resurrection?

The passage of Death for Christ was unlike our experience when we move between worlds. When we step out from this place and time we are subdued by the angels of dissolution and given the freedoms to separate from our distinct and physical frame. The otherwise pain would be most shocking to our spiritual natures, for we are so bonded in all ways to the world and its substances while we live amongst it.

So as Death is often portrayed with his face hid within a cloaked hood, his face is kept from us when we pass, and we truly do not comprehend any process of cessation as it really is. Upon our personages and about us there is death occurring continuously, but alike to our young prince who was kept innocent of the worldly ills which lay in decay around his fortress, we too are veiled from its reality as it moves amongst our existence.

Christ however, went with Death (Death unmasked) throughout all of his processes, following him into each and every vestibule of final infection, into all such transactions there are in material life where he becomes present; there and almost to the threshold of new life as well.

Death hitherto was present at the threshold of new life, insofar and particularly as new life would often double as his valet. For example: when some life plagiarizes life before it, when other, in vampiristic form (as in yeast growth or fungi or cancer) overrides the life it seizes upon, and is the very cause of its cessation, its properties are then of death so governing.

Death is the being of Mankind's collective sin. Demons are predictable and because of this we may come to expect bad behavior from them and not be so disappointed (at least until such a time when they are converted). However, the sins of men that cause death are more powerful in their furthering death, because Man is a representative of Christ, and all that he does bears the power of the same. What we do as men we do with the greater Cosmos, witnessing both Father God and Christ's presence and power in certain measure.

From this you can see that we have collectively inspired and perpetuated many destructive impulses that unravel the world in all of its processes. When men project ill will, when they savor their own bad behavior, they assault not only in the immediate, they also contaminate their futures Christ-given.

It was this being, summoned and fed by men, which Christ confronted; this being, which indirectly has come of Him and wears his same power. This being which threatened the souls He defends, in same likeness to Father God. 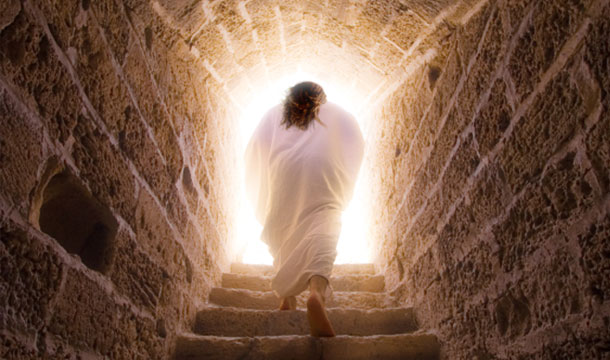 The resurrected body is one without evil. The etheric is so pure that the form is held together as with honey! If a man emits a malice, it does age him, age him with the extraordinary death to heart and soul that his spirit does know. Hatred deflates a man. By Christ we can now come to forgiveness, to expression, and to such happy playfulness which is of Life and not in contest with it.

His heart was preserved and still beats to this day. The form, though transformed, has dissipated and is scattered as seeds into the World. Can you guess where and what the heart is? It is but the Sun!

A merry laugh, uncontaminated by sneer or pain, brings with it a burst of new life into the world. You can feel it when it comes. Such joy in laughter and mirth defies the deathly sadness at times, and is Christ inspired, quite of this New Age. When we laugh our egos expand and contract, and during the expansion the etheric vitality swells in. You see all merit comes from a greater merit - a cosmological example - and our merriment itself is a profound quality whereupon we most keenly sense the activity of Life. Had our dear Christ been so overcome by the sorrowful aspects of Death when He was given to investigate, answer and heal, He would have been so waylaid by the grief ne'er to have risen above it.

'Upon a laugh I shall arise' and so He did - when He saw the distorted image before Him of what went wrong, he found a whimsical, affectionate, 'things are now perfectly clear to me' almighty laugh. A laughter that blew demons away, flipping thousands over mountains and back again up to the Moon. A laughter that cloaked Death once more and tore the flesh from his bones now naked beneath. It was a laugh that spun the Karmic wheel around, and around and around, until it slowed down! It was His laugh that taught the babes to chuckle so, and the faeries they see to dance for them gaily. And His laugh that affords the good natured soul, who despite of himself or all that goes wrong, regardless of age or of tired, pained limb, despite a poverty having not much without with a hunger within, that in fear, or by trial or even with death seizing in, we can step back from the pain, for a holy moment and recover a joy by such laughter that knows of His Love. Never concede Christ to doubt or to upset or to death. Though He suffered and still does, in the wrestle on all our behalves, we must also know confidently that all answers are there in He; and He loves with such a wholeliness that not one soul will be left out. His tenderness and affection, His love for us in clear intention, is fearless ... remember this: Death trembles in the Presence of our dear Christ now, not our Lord with that old bony! (You'll get the hang of it.)

Smile broadly this Easter...
For He Hath Risen!