[Reply to question on the above]

YES, this is so - one dark consequence of drawing in vapor which the ego (when so open) finds difficulty tolerating, will be a further and heightened intolerance thereafter - the legacy being known as an allergy.

Not all individuals respond similarly: it is an interesting point that what may have been even a harmless nutritive to one, can transform overnight into something taken for a poison subsequently. This proves somewhat the importance of our relationship to all else, requiring a certain stronghold and endurance from our own incorporations firstly; something which over time is gathered and guaranteed, not by using purely physical means, but rather by the employment of virtues.

If a man or a demon is opportunistic enough to work with the intention of approaching another in such periods which he is weakened, opened and susceptible to overwhelming influences, then it happens that in the short term the man concerned may be afflicted with their presence and overcome by their will to the degree of losing their own mind's deciding. 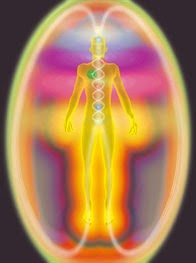 A man does not have to incorporate intentional breathing exercises that he relaxes the elasticity responsively in lung cavity or in that of his auric shell; or inflates his astral sensitivities or lends his conceptualization to the outer imaginings; or gives over his arterial holdings; or pick-axes his own border-walls of resistance; or prematurely exposes his ego - no, there are many ways of having this effected, and many more in which another human being or demon being may take advantage. However, just as with the physical proximity's reaction, we shall also in time find that by Grace a man will become 'allergic' as well to the very demon or predator who has tried to take advantage of him thus.

The demon who has insisted that a man take up a weapon and murder, for example, will be loathsome and haunting upon his return, ever frightening to the same man, who has now petitioned his senses to lock down against it. He will tremble all life thereafter, as it presents itself to him. The same demon shall be mistaken by him for the Angel of Conscience - so wretchedly confused is the man who flies from that which, by original weakness, he first did invite to him.

The process of the physical response may begin with the ego being susceptible to the signatory substance or its characteristics whilst being overtly 'open'. However and having said that, long after the ego's fissures have tightened there will be a response of alarm in the corresponding astral nerves, distinguishing it even through times of relative inexposure.

Of course, initially the substance of itself need not be even physically offensive, but moreover it is its associative qualities (planetary, spiritual origin etc.), which at certain times gather certain strengths, and we may react against for many reasons accordingly. The result is that of a poison being regarded by the individual for whom either a tolerance must be acquired, or an ensuing corruption will take place in the condition of alarm, astrally, etherically and physically. The vitalities leak and the mainframe loses its overall magnetism, the cohesive properties of form are given to alter and the cellular structures erode; the etheric life is no longer drawn in and bonded with sufficiently, and the physical body shrinks, weeps, cracks and groans under the assault of the said and recognized 'poisons'.

In homeopathic reform, it is not only that the reintroduction to certain substance (or moreover, their etheric properties in pure goodness) is given, but also that the assimilation of that substance is given into water, that issues the medicinal difference. Water is the Heavenly Ego manifest, and it is the Heavenly Ego that negotiates and contains all other egos within, that we can come together and mix and mingle as we do in a landscape of differing yet corresponding being. It is because of our combining affiliate with our all-encompassing Heavenly Ego that we do not simply repel each other out into the reaches of an infinite distance; and because of this egoic binding, influences may harmonize, some amongst may gratify, and the lives of all do obey the greater laws.

Sadly though, our physical properties are as yet not so refined as to be able to immediately give over to the greater realities from which they were born of; and so it is that poisons do corrupt quite generally whether slow in action or apparent. Both willful people and invasive substance can wear at the physicality of one to whom these poisons terrorize.

It can be said here also that such weakness or susceptibility is not shameful in regards to one's own position in development. Overall the only answer for humankind in strengthening their bodies throughout, as well as their egoic flexes within is, as maintained before, won only by the path of virtue. This needs be achieved collectively else innocent souls will continue to be born into bodies and conditions which are remiss.

Quite often it is today, that there are no defined qualifications given to individuals at the outset; and saintly souls who are even yet more sensitive to the collective sadness and weaknesses of the whole, are the first to be given the outcomes of sickly complaints.

So it is that we cannot look to this one and that and consider ourselves capably diagnostic enough to fully comprehend the true causes of each physical complaint as it presents in the obvious. For every apparent manifestation of something, the exact opposite may be its cause also. This is a both a useful tool as well as exercise to remember when we are assuming or assessing the outer characteristics of another.

Intuitively it may well be possible though, to divine some of our own causes (and there we are permitted lawfully to examine upon our own consent!) and then with an optimism for cure, set about to:

That which we take unto ourselves,
For ourselves,
That which does sustain us,
May it be filled with the Fire of the Twelve,
And so divinely imbued,
That we may tolerate Life,

And Life may tolerate us.

If the lessening of breathing is self-employed as a corrective to the condition of over-breathing, then it also follows in relation to the ego activity of that organ that the individual thereby will be practicing self-consciously an affirmation of self-containment. By exercising one's self-containment you may strengthen your overall resistance and ability to discriminate; and the attitude described in the physical practices will carry on through to attitudinal habits then conducted in the psyche also.

However, all good practices can exceed the point of their usefulness and this too is to be reckoned with. A man can breathe too little and be weakened by an inactivity. A medicine may become a poison if taken when no longer required and therefore is refused by the organism (and later to become an allergen if the man persists with it).

Like so, if a man who does not over-breathe is taught a technique of intentionally lessening his uptake to suit other purposes indicated but not defined by the condition, then we advise that this point of the exercise may prove counter-productive and confusing to the issue of causality and management.

Rather than by measuring the volume or omissions of the man to gauge the condition of over-breathing, we suggest that he be asked to know this for himself, that he may also then go on to discriminate other times too when the discipline should be effected as well.