IT is paramount to all concerned with parachutes and impending falls, planned or spontaneous, that they check their connections - all vital cords - afore leaping.


We may form a 'mental' parachute, one which may shelter ourselves and take rise upon the free-falling terrain, that our journey through this sky may be delayed in time enough to capture some of the scenery, rather than rush to meet with an otherwise unfriendly bed of earth below. One's parachute does fit snugly away; it is quite a contrast of area to mass, once opened. And we are not confined to white either. What would the design be? You might ponder this through until comfortable with a personal hue or appliqué. And remembering also of its radiance as so lit, between you and the Sun. 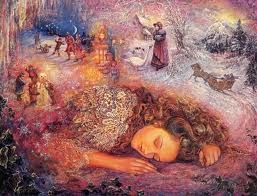 In a Hans Christian Andersen story, there was a little boy who would hold a magic umbrella to sleeping folk. . . and they would dream; dreaming dreams of pictures and visions, as were best coming to them: Ole Lukøje. And this child would visit bringing his small dome of imaginings to their bedside, and they would be sweet, untroubled and picturesque.

As smoke which curls and spirals and wafts and wavers and drifts and dissipates until dissolved, one may look to the sections of their overhanging parachute and see whereupon, such visions unfold in this and that section; in color, in format, in imaginings played out. For this be our special parachute; the one which affords us the time to envision the skies intimately.

Here is an old favorite:-
There is a world we see,
and then a piece of ground: a mountain.
On the mountain there is a forest, in the forest we go to a tree.
Atop a tree a tangled nest.
In the nest an egg, upon does rest.
And in the egg a bird springs forth,
and opens mouth.
His voice rings out and out and out.
It flies from the egg, from the nest, from the tree.
It calls from the forest and the mountain, to the sea.
It goes twice around the planet, and comes back to me. Within this presentation we find the action of the focusing pupil within the eye - which, by the bye, shall be physically strengthened by such inner contemplation; for we may actually direct our thoughts in ways of exercise which give to our systems a rhythm or a re-establishment of a kindred inclination. We are powerful in our imaginings, and hold sway over all related functions.


The parachute imagery may help one to begin, begin into the sky-dome meditative state, until it becomes easier to unfold one's parachute, or conversely, fold it back up and pack it away again.


What of meditation? Meditation is a conscious step out of time whereby the individual who looks inward has forgone the world and its limitations, and allowed time to be afforded for this rest, repose and concentration, out of time.

It is not that we are to be at all times 'carefree', nor that this is the main feature of any practiced meditation. However one can say that if an individual lends himself to such practice, he shall benefit from the 'slack' - from the conditions of such great rest which do accompany his meditative endeavors. And this is a result which is not to be bypassed as purely relaxation, but moreover a relaxation of inner tension (inner, inner tension), in alignment with all other tensions, the whole way through.


The first happy result comes from the fact that one has given time to it at all. For this is special time, the veritable 'quality time' permitted to self, by self. Furthermore it is not as an escape from the world, insomuch as a mutual bonding with those aspects of the world unnoticed by the 'fast fall, nose-dive'.


One need not become as the extreme yogi who almost disincarnates with shallow breath and sublime extraction, with merely a fine thread remaining earthbound so attached. This meditation which takes us to those moments after waking or before slumber, will produce a slowing of the pulse, and of the breathing quite naturally; but does not need in any way to be severe to effect enormous change.

Folk may be daunted by suppressed pictures, resurrected memories or challenging, nagging thoughts, all which present and impinge upon the quiet times. Even the quietest of conditions may be interrupted and made noisy. It is important that one remains in good humor throughout, without the stressful attempts to make an aggravated peace with such presentations. For in patience they too will quieten; and yet having said this, such reflection and examination, real examination, is very good of itself. That one may be awake enough to project into that which is before the mind's eye and meet with it and commit it to an orderly place once and for all.

Too often one may try impatiently and proclaim "Well let's get to the good bit" (meaning the deeper aspects of a meditation), and then feel most abashed when sleep calls and no immediate results, result. If we are to observe something about development it is this: any results which occur instantaneously in a large manner are good for a short time only, or are more trouble than they are worth.


If development ensues over time with steady preparation and results, in its own time, which is conducive to the rhythms and the constellations and one's personal aspects, then it is to be regarded as substantial progress. Therefore one shall not find immediate results in meditation, but a gradual strengthening and wellbeing shall follow slowly behind.


To give time to oneself for renewal and for discipline, for exercise and general improvement of all of the constitution, is an attitude of 'caring' for oneself. The vitalities respond far more deftly with precision, with tenacity, because of this consideration. The 'time out' is never forfeited, for it is actually extended and furthered (in terms of years) to each and every person. The fact that some may live very long indeed, may give you an idea of that which is invoked by this 'living out of time'- an actual extension of worldly time, physical worldly time, afforded by this practice (made perfect!).


It is because one's constitution has a limited capacity for assimilation. Life is ceaseless assimilation: worldly life requires that we incorporate worldly substance within our being's being. And to an extent this is a sufferance. Of course one does not mean to say in grim terms, that the privilege which is life is of suffering. However there are tensions within a man that do protest the cohabitation of certain demanding conditions, which may be viewed at times within the world particularly to conflict, or be in argument, rather than conducive to all aspects which comprise a man.


Now as regards assimilation, we are only 'good for' a limited capacity of worldly material before there calls the need for assimilation in higher requirements. And as we know, the body does tire within the world, and ages from this calling of the higher man. However in the case of meditation we are actually submitting to an assimilation which does please our higher being and nourishes it, relaxes the tensions which are from level three down (explanation later); and have lost nothing in the practice at all. For it is the assimilation of oxygen, the ability to do so and combust, that makes for incarnation, and this time-out will afford us ability to take in yet more time, as one does work with the other.


Conversely we may examine the deathly impact of a relaxation of the lower aspects and the tension thereof as regards alcoholic beverages and the like. Here the aspirant (good word, 'aspire'; also as in breathing) becomes as a perspirant (from the Latin persparare: to blow, from per- through + sparare to breathe); whereby the regulation of such assimilation of time is as with meditation, but not as is with meditation. For in the one case the aspirant may actually enhance his ability to incorporate the world within himself upon return from meditation, and in the other, the perspirant does not of himself so 'give over' to this timely consideration, but rather has forced himself from his shell and cannot assimilate time well at all. And the illusion of timelessness is because of inability - a no-man's land, which in the long run detracts from such abilities in later life to work the constitution thoroughly, adeptly and with precision.

One may be sufficiently 'relaxed' in death, but this does not mean to say that total relaxation is desirable. This is why meditation and meditation's accompanying contemplations are referred to as exercises; for in truth the individual who makes effort to manage himself in these realms of behavior, shall be qualified in subsequent tension also. That one becomes strong from the ability to venture in and out of these conditions at will.


One could be with such strength from these exercises that any conditions as set by the world, would inflict little pain, if any. And though we might weep for those who are imprisoned: be it jail or in withering limbs, one may readily see the benefit derived from the abilities to enter into meditative contemplation, and withdraw and re-enter accordingly.


If after twenty years of such practice one could say, "I now really feel the benefits!", then how wonderful it is - especially when one considers, that in twenty years hence the benefits may be well needed! Enough humor! Meditation on meditations is recommended to all men and women. The only but or hesitation we would add is that meditation as used for magical purposes is undesirable. For we find that if there is a 'forcing' within that relaxation of inner tensions, the unguarded may find that the resultant tendencies become obsessive and overruling. That, that which is adopted as practice may be indeed difficult to shake, and negate decisions of will in relation to the strength of experience. In other words, we may all try so hard and so well, that we develop into living fixations, that only one particular spot on the parachute be illumined.


If I am to contemplate the Holies, the Mysteries or the natural wonders, I am to throw myself out from myself and be cast into those qualities which I seek to know. But if I am determined by a desire to invoke a magic or a phenomenon within myself, then I am not at liberty to submit to the higher knowledge of these mysteries, as I am taken up with the effecting of properties as pertaining to myself. There are totally different results from this. The necessity of perspective is a large issue to the would-be aspirant.


All lofty thought makes for good material substance for meditative contemplation, for it is through the avenues of such inspiration that we may travel the paths to the essential wisdom of which they are offspring; and by their nature, invocations will vary. Furthermore, the aspirant himself is always the better judge as to the quality and the representation of any given meditative contemplations.


Commentaries are useful and enlightening, and for the beginner much treasured as candles illumining the visions. And potent visions will come as soul pictures. The aspirant will learn of the nature, the direction, and the action that such pictures take. It is not dissimilar to one's own dreams, whereby the best interpreter in the world is oneself.

Canons are very sure of themselves, but have no personal sense of direction.