MANY classify one's own conscience to be a distinctly separate and wholesome part, which is not entangled or embroiled in dilemma or the concerns of sin. Whether viewed as separate, of angelic or inner voice, the conscience when rarely focused upon, appears as a powerless authority that we may or may not consult should we choose to ignore its jibings and pleas.

That which is a conscience in a man, is that which is most bruised and battered by many a former err and misgiving. Separate be it to the personality, yes, but closer to that individuality which is most properly the man- far closer than the personality will ever be. The forming of the conscience within a man's consciousness and without (held in the auric metabolic memory so impressed) is paramount in retaining those experiences which identify a man with a man, and determine his humanity towards all. 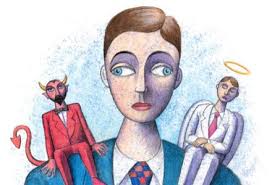 One might suggest that the sum total of a man's progressive evolution is not in faculty enhancement but rather in fulfilling the realization of a high and according conscience.
In this respect when a man finds it most difficult to reach the concept of karma and perceive its instantaneous workings from the outset, one could say that this is extremely beneficial from the perspective of the nurturing of his conscience. That man does not feel duty-bound to acknowledge the law, divine and natural, but instead begins to discriminate out from those experiences and relies upon judgment which is not defined by fear of retribution to his acts. However, it is often the case that when a man's conscience has begun to be realized and is actively in place before all actions and concerns, one will find that the nature of karma is readily accepted and does not irk the individual at all. There is harmony in both viewpoints.

All judgments - and all living requires calls for endless responses namely: judgment - are turned inwards. All sympathies and antipathies return to a man. If a man is far removed from his proper sympathies and determines to dwell in the outer limits of a personality which denies those sympathies, then it is to the detriment of his suffering conscience. It is essential to reach the attitude of spirit whereby all that is connecting with a man may be interpreted and known inwardly. This is conscience.

Therefore, when any one man steps beyond the bounds of concern, and in invasive act (or thought, for that matter) causes injury or imposition, he is in time made keenly aware of his liberties, so out of line. This is the path of true equality, that one soul may not push another soul out from his universe, his home or his happiness. In divine terms, there must be consideration and also a wonderful empathy so inspired, that through the multitude of kingdoms and divisions we come to find our true selves. This is conscience. 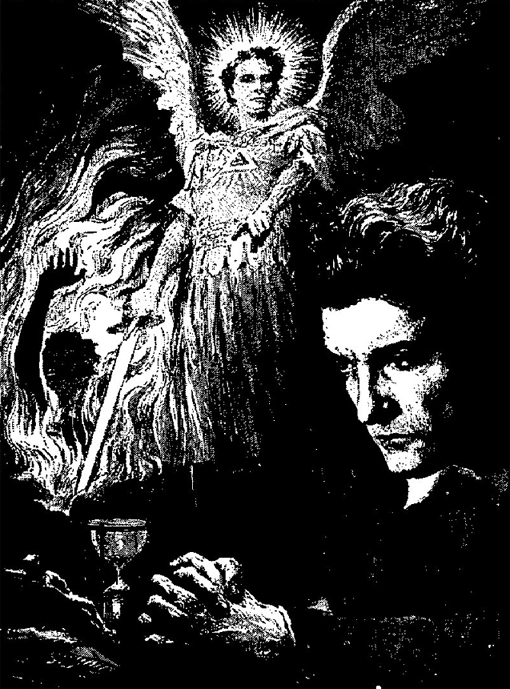 The conscience suffers pain much like physical pain, excepting that the pain is so profound and does not dissolve and is not made better. For in order for man to learn of the outward conditions which he inflicts himself upon, the conscience must suffer repeatedly and endure those sins of the past. One's Recording Angel is one's own conscience, and one's own conscience is in reality one's self. For it does release the soul from the pain which it should carry, and in this sense is separate to the personality. The personality is a refuge, and has privy as to choice of acknowledging or disassociating, according to the lower ego. If one is to feel sympathy for one's own conscience, then feel also too, that for all others. Yet through this inner sacrifice we come to know of the worlds above and below. And there is much sweetness to endure such intimacy.
It does well to satisfy the cries of the conscience that we hear. Were one to practice listening, it becomes more and more apparent; remembering also, that in pleasing the bruised and beaten conscience we do in fact save ourselves.

After the passing from death to higher worlds, the personality is sheared away and we are what we are. We have full allowance given to us, we must consciously reunite with our higher faculties, and experience is had retrospectively through the recollections that they carry. So within us today we carry our own personal hell and purgatory, which is so saved for the appropriate time of reflection when gathered up and met with in death.

We must absorb and assimilate those burdens (as well as those graces) which we carried lifelong. This too is a blessing of course, for one is given the opportunity for advanced insight with profound clarity to gauge the impressions one has effected in the world. Were we to be overwhelmed by such and dwelt consciously in the higher aspects of sympathy in daily life, we would probably take to bed and stay there- at least in this way of greeting the sum total of a life all at once. We have contrasts, contrasts which would not have been achieved and viewed if we had not erred at all.

From life to life we absorb this experience accordingly and carry with us the remainder - our conscience, our selves which have passed through the trials of our sins, our complete treasury of sympathies and subsequent intimacies which allow further communion without and within. The lower aspects within the constitution of man would have it that the conscience be suppressed and disregarded. There are many modes of conduct and practices in life which are very effective in temporarily abandoning the conscious acknowledgment of our selves: of our conscience. This is the component of sacrifice: the true martyr, one of our highest aspects and yet cast within a jail of vice; remembering that all sins divide a man from his humanity and injure himself accordingly. When it is preached that morality is essential to development, there are many good reasons why this is so. Apart from the fact that the substance of Virtue is Cosmic and is life-giving in itself; apart from the fact that Virtues speak to us of the manifold aspects of the Father and His design; apart from the fact that the Virtues are demigods who will not be denied, and as such are imperially important to our understanding of the spiritual realities ... it is also so, that the cultivation of virtue is a wonderful healer to the conscience, that which is indeed ourself. All sins cause necessary, whilst unnecessary pain and confusion.

One could say, "Why wait?" Yes there is learning to be done and many mistakes still ahead - but why add one more or one thousand more, if it can be avoided by good clean living.

There are those who at this point, would query with haughty voice, as to the nature of morality and contest that no one really knows. They speculate that the wrongs and the rights of this world are without substance and so created by the moralists, having no direct bearing on reality. There is an answer to this: that they should begin to listen to their conscience if it is difficult for them to come to the realization: an awareness of 'good' defined and 'evil' so defined. If they cannot reconcile morality with immorality, then they must consult their own conscience.

It is possible that they have not yet the capacity for knowing of the intricate sympathies, that they have gleaned next to nothing in way of experience. Excepting, that we would suggest that if their behavior reflects their sorry attitude, then subsequently there would already be much suffering within their conscience - enough to come to know it, would that they could divorce the babblings of their lower self from the stifled inner voice.
Enough said of that.

A man is not easily defined. The conscience is but one of the higher aspects of an individual. Just as we have fingers and toes, and are yet still a whole person, we do have higher graces with divine implications that extend throughout our experiences. For there is much within Heaven that we may take into ourselves, and in order to do this progressively we must have the attracting constituents in the first place. Our ticket into other worlds, so to speak, is already part of our substance; that we might come to know them.

Did you know that every virtue has its own world and one may pay homage when death ensues? If the visit is to be enjoyed with some measure of consciousness, one must practice the acceptance into one's constitution of those vitalities which are peculiar to that virtue.

From this hint one may gauge the service of the conscience, not only as protector from one becoming a creator of destruction, not only in acting as recorder and reminder, not only as entering into divine and objective sympathies, but also as a leader into gateways of realms and spheres at present unimagined. For those who enjoy travel and relish the experiences of wonder at those unknown landscapes with such colorful peoples therein, they might guess something of the joy that lies ahead in the heavenly trek.
So we must be mindful and respectful of our beloved conscience. With acceptance of ourselves, our higher selves, we can go forth in a new light of understanding, easing burdens within and without, setting courses of which the itinerary was long before planned.
So be it.