The Angel with Illuminations of Past, Present & Future- 8th June 1991 BROTHER Goodall: Simon of Bosley, prided himself on a lascivious eloquence and a cunningly sharp humor to follow. His days and nights were so intermixed that he knew not when one ended or the other began.

Born a bastard son of a bastard son, he worked fervently to keep up the family tradition in thus propagating his line. Whilst he had money, he cared little for it and cared less for those without it; seeking the company only of those who indulged in profits from the poor. He was a fink, and that name given to him began a tradition for other coarse, crass, undependable oafs, that frequented society in like manner.

Up to this point of the story one might ask of the outstanding virtues, or at the very least, details, which should isolate Simon from the rest of his gender, making him exceptionally notable. Three times an Angel came to him, whilst he slept awash with leaden draught drunkenness, and appealed to Simon to change his uncouth activity in the world. Three times marvelous opportunities were offered, that might incite his soul to awaken to his hapless condition, and three times the Angel, rebuked, was sent away, unfulfilled. 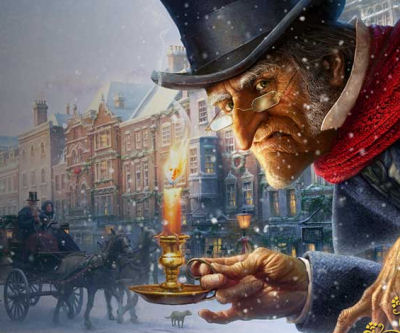 At the deathbed of Simon Goodall, the Angel returned yet again - this time in repetition of the former visitations, this time to illumine that of his past life. For the pulse had stopped, and duty bound was this Angel, to prepare him for what lay ahead.

The second illumination was of his present condition, or moreover, of all those folk within his immediate constellation of society. With this, Master Goodall had now knowledge of their stories and sufferings, and saw great possibilities for all concerned.

The third picture vision which was impressed on Simon's consciousness was that of a very bleak future, as he glimpsed heavenward with confusion and emptiness, and grief at the loss of his former existence.

It was with this final horror that his heart resumed its beating! Short, sharp and sweet with determination, Simon returned, thump!, back into his physicality, and returned to live on another forty years or so!

This second chance - so called - proved Simon a completely changed man in every way, to all good measure. The merits of his works accomplished still carry on, as he founded many a charitable enterprise, and indulged only in virtuous study and application, being a good example to all who had pleasure to enter the second half of his life. 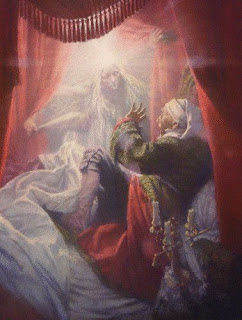 Dickens' Scrooge was such a man. We know because we gave Dickens the story in the first place. And the story is an important one, not only in the redemption of Simon Goodall, but in the telling of experience after life is quashed on Earth, preceding death. That we all share in the grace of the Angels' illuminations of the past, present and future; for herein is the true digestion of any life lived, and of immeasurable value, as this final experience is of lasting impression to the soul. It is what one gleans and takes of a lifetime. Without such impressions, impressions that translate over to the soul, one should recall very little indeed in future existence - negating the work of that tenuous lifetime.

So Simon had twice over realized his relationship to the world, in one lifetime. Many before and after him have also been given in part, second chances and glimpses of such Angels.

If when one enters into slumber, one questions their own effects within the world, they shall be given insights, whereupon in waking certain aspects will become clearer to them. For this Angel is called Conscience, and would that she was invited to give lesson, she comes to all with pertinent illuminations.