Question:
As far as the children of God are concerned, there is no question about it. Do you believe that all human forms have souls?
- Br. Ron

HUMAN forms manifest around two governing prerequisites, Christ being apparent and central to the whole, and also a humaness, of which the key to the pneu instigates the overall cooperation of the collective organism.

The human form exceeds itself physically, and by its apparition begins to work with forces in ways which not only transmute the physical properties used, but also etherically work outwards as well. The aspect here is that you may have an individual who is endowed with spirit/soul/ego-major/ego-minor/astrality/ether-body, who is 'whole and intact' with these containing and operating parts of being manifest, however when being part of the incarnating-into-matter process, is not as jailed (as one might first think) but actually has more cooperating 'power' of a kind in possibility, by their physical organization and internment, than without it.

The understanding of this may be addressed in detail at a further stage, but the above is to indicate that the human form itself is indeed very special and not just merely a clothing to a higher existence. In its own right there are mysteries which will enable men to achieve what they could not if confined within the spiritual realms only.

Now the question of whether or not we can have animate bodies without there being motivating souls within, can be answered by saying that there are many degrees of incarnating and expressing the self-consciousness, manifesting the egoic presence and so forth. Although it may appear to be a dry wit that replies in this way, we can examine many folk who are barely self-conscious, hardly wakeful and operating egoicly, for countless reasons. One can find generally speaking, few examples of individuals representing themselves in a present-moment/self-conscious/arterially-responsive/intelligently-soulic/objectively-egoic, lively, wakeful, way.

Never mind your zombies! The true zombie still has his connections - certain connections to predecessing humanhood. Without such connections the form would dissipate immediately, without compromise.

We are driven into incarnation and to remain for very deep and strong reasons. When most men sleep and their consciousness is removed from their bodies, their bodies may appear to be 'somnambulistic-zombies', whereas there is no sinister or doubtful concern with this process. As conditions change within their capabilities, the practice of this will change too. At present, if you can leave your body and be forgetful on the ensuing continuity of consciousness upon return (during sleep) then you also, during brief or prolonged periods, will do so during the day as well. No matter how much a man may pride himself about being aware, this propensity to withdraw and not remember the episodes between is there as long as he exhibits this unconsciousness during sleep.

Later throughout his development he will pass into the spiritual worlds and back into his body with a self-consciousness which is suited to both. Now one might suggest that the body will still be inanimate during the sleep, regardless of the individual and his progress with his continuity of wakefulness throughout. However our physical form is greatly affected (as long as we are connected) by all that we do; even when we are functioning outside of it. And when the individual has achieved a greater continuity of self-awareness and expression in both realms, the body will experience (to its understanding) that which is encountered without it. This happens not only in the spiritual worlds (by which there is a marvelous experience for it to realize), but also when the adept has projected himself into the physical realm (physical or local astral) the body also identifies itself with the experience of the connected soul. 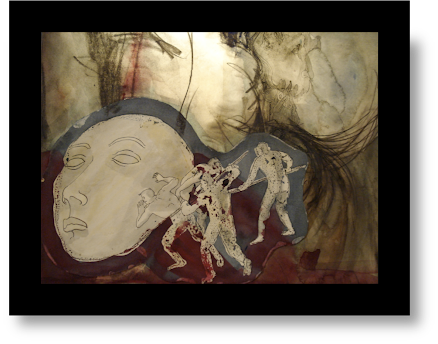 Do animated shadows have their own light in them which activates them or are they merely chimera projected out upon the screen of Creation by the lack of light? It would be nice to say that there are not true beings of malevolence, within and without our Kosmic fields, our home. The dire-most entities are often referred to as 'the crucibles' because direct supplication to their evility was brought forth in response to the hazards that they caused.

One philosophy we embrace tells us that all things come out from goodness. Here a secondary truth we can add, that much goodness has been born in new form resulting out from the crucible of the most treacherous of beings - yet it is not to this purpose they work.

It could be close to the truth to suggest that in this way the Devil himself has prompted much goodness. There are faithful and obliging individuals who would have it that this was so, because there is a certain historical proof within the arcana, to show that terrible and horrifying beasts caused Heaven to find a creativity She never knew She had before.

Yes, dark places there are, parallel places to our own, in counter-force, in cruel domain.

Yes, they can and do manifest through individuals who expire their humanity into the passions of these demons. The pedophile, the rapist, the murderer, the torturer, these individuals feel the enjoyment of the pleasures of the demons as they are infiltrated by their presence. Demons personally do not take immediate pleasure in the acts of defilement to humanity in ways as we might think (they can access brutality everywhere easily); nor do they enjoy the defilement of the individual who is corrupted with their design primarily. Their major agenda is simply to come into the body itself and attempt combining with it.

So, to be very specific, the point above was not so much about the human content in or connection to the body, but moreover about the demonic content and connection as well. And so we return to the mystery itself of the power contained within the human frame and what it offers.

Practically everything today in Man's thinking is 'taken out of context'. Organic thinking has been replaced by mineral thinking. Intellectualism became fragmented - even chains of specifics are island concepts. The mind absorbs wonderfully many differing informations and experiences, yet part and parcel of today's augmentive cognization is fractional thinking, which is out of true and whole context.

We work to maintain a reality. The reality is not given to us or perceived so easily as it is. We determine much by our thinking, yet are limited by such tools to divine with. However, in truth all things are connected in a living and interactive way. In truth this fragmentation really only occurs in the thinking itself. It is not how things work in nature or within ourselves.

The arcane tree [Sephiroth] is quite the plan of the body. With such plans one can see the demons pore over the shoulder of the magician…studying, studying, their greatest confounding anathema. Now, why the obsession, and wherefore the cousin-keys, were they not (at least in part) human themselves, in the making? A trademark of demonic activity is also in the fragmentedness. They are mineral corporeal. They are associated with the spheres astrally and minerally, which the virtues stream through. But, they the antithesis to the virtue of their sphere, hold keys to us through the substance of the planet to which they are connected.