DISTEMPER in an adult who ordinarily is of sound mind, is an act of imprudence and despondency whereupon inner confrontations are refused to be met. Quite often tempers are likely to flare when we engage in a novelty of truth presentations. A man will not submit to admit, even though the time is nigh and the reality of his actions are clearly before him. If we 'let loose' our passionate tantrums and exude much of the troublesome vitality affiliated, then we restore the nervous system momentarily and quieten the impending resolutions. However, in the long run one may not continue to spew self-contempt, rather than address the aggravation, for such tempers compound the initial problem.

Denial is a two-edged sword. Firstly, one can say that there are two types of denial: positive and negative. A positive form of denial is, for example, suppression of sinful habit or doubting outlook. We may actively deny the meaner qualities of self and emphasize our loftier attributes. We may deny having jealousies, inadequacies, contempt, prejudices etc., and willfully concentrate on directing pure thought. It shall be positive if such denial robs the unworthy expressions of living substance, and therefore depletes and diminishes the 'blight' by such denial.

Then we come to negative denial, which turns a man from conscious participation in his own life. He has exercised denial in a circumstance which will not be dismissed, because there are factors beyond himself involved. A man is drawn into confrontations, and can no longer simply err into denial with comfort. In other words, one can presume the leather of the shoe to be vinyl, that is until the ghost of the beast returns to reclaim his skin. We deny much which brings us discomfort to reflect upon, until such a time that those others who happen to be inextricably entangled demand release or retribution or apology.

One can actually alleviate much future aggravation by purposefully going to work upon a table of personal denials. We may allow a column for those characteristics we should wish to diminish or transform, whilst too, try to establish (peek-a-boo!) what we ourselves have hidden in the top draw of forgetfulness. Pen to paper often makes abstract such submissions, and redirects the otherwise convoluting energies.

However, one must attempt this peaceably and never in argument. Arguments are spawned by the very material of denial; therefore it is by wrong approach to enter by that road from the beginning. If a man is actively firing in rage or temper, then he is cavorting with emotional fireworks and is pleased within at such display. Men or women produce this unnerving spectacle because it pleases them. Outwardly there appears much unhappiness bound to the commotion of angry outbursts, pitched screaming, torrential insults and so forth; whilst the very activity becomes an enjoyment within itself because it makes the denial process easy. There is so much going on.

What of the unfortunates who are given to endure the wrath and fire? They either are prompted to retaliate, or absorb much of the bruises and beatings of verbal upset and ill temper. We recoil from these outbursts because they are offensive to our sensibilities and sense of fairness. The actual display of fiery temper is of itself an unjust assault; whatever the reason so named. With perspicacity we may 'duck and dodge' much of the insulting matter, until the aim becomes so accurate that it impinges upon personal upsets borne by us. More denial: the denial of the safekeeping of upsets: those memory-impressions which inspire shame or recants of tribulation, and the denial of denial.

Many fears, unfounded fear, is actually rooted within past experience which is clothed in denial. The unconscious aspect of the fear, or anxiety for that matter, is to a degree, self imposed. The fear generally alarms us to certain response, without the unveiling of the denial of the stupidity. A man can assume an abstract interchange in life, without consulting presentations of memory or self directly.

Question: If someone before you is enveloped in fury which is distressing, what can be done to abate it?

There is a 'charge' running off that man which is lively and contaminating. There is certain poison which enters into the world via men's anger and it is a sickening influence to he who welcomes the venom, and he to whom it is directed. This therefore is the first issue at hand. 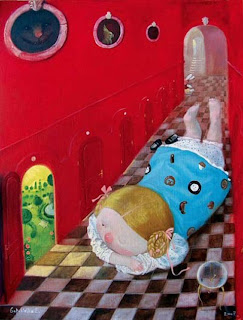 The discharge of fury can be equaled and therefore halted by visual concentration upon a little doorway which leads to a magnificent garden. Just like the scenario in Alice in Wonderland. There is the perfect imagery: Alice was very large, much larger than anything else around her - something caught her interest, and it was a doorway. The denial made it so tiny that it was impassable; unless she is provoked into interest once again. And the fascinating garden to which she may only peep through to, is splendid indeed and invites examination!

We can actually inspire another soul who has come to the impasse of denial. Words amidst rage seldom penetrate. Visualizations of calm waters and 'centerdness' etc., are valid but difficult to maintain when caught before a perilous and unstable temper.

It is not possible for an individual to do any more for another than lead him to that door - the augmentation of prejudice is self-centerd and precludes realignment from the ego of another. However outwardly, laughter or distractions may calm the rage; one reason being that the denial is so assisted, and the centre of confrontation has moved all together.

There is no man who is without upset. There are periods in which the most pious and saintly of character suffer internal torments and arguments; necessarily, because their yardstick is relevant to their sanctity. Not all men however, are given to semi-controlled outbursts which actually incite injury, permeating the ethers malevolently.

The furies are the essence of contrast. The 'dynamic' in dynamicism. The fiery nature of animated fire. And it is agreed upon, that elements of perfection so acquired, are by the gleaning and re-forging of one's greater imperfections. The same trail of disaster that the Furies may lead us down upon can be, conversely, the ladder of ascent also. Historically one cannot deny the Grace of God in His manner of salvation. For the word ‘salvation’ itself implies forgiveness and remedy to error - it is the salve to the wounded soul, it is the claiming of the spirit from disease, it is the tribute to Glory regardless of sin's appendages, it is the happy outcome- His Happiness ever the frustration to evil. If men could know this and be sure, then they would not be so quick to hide their shame, but rather give it to God, as He knows best what to do with it.

Motivation for change - changing, developing oneself, curing oneself - needs reflection, and the clearer the better. We try to hide from ourselves and from God, from the World, in utter embarrassment. This of itself is not akin to true humility, but false judgment from a dejected man. There is truth also, that perhaps we are unworthy of love as yet; however we are loved. It is perhaps true to say, that we are but a suggestion of what we may become. But we must not defile and defame ourselves for the sake of mere impatience. Rather, be encouraged by the promise, and trust that it is made by "He who knows better than thou".

In point of fact, so also runs the entire system of wisdom in which you are cradled.

Humility was never meant to be taken so it crushes a man beyond hope and repair. Humility will however, answer the furies of denial, with the courage required to enter the little door and know the garden behind it.
Posted by Bruce at Friday, February 26, 2010