TRUE laughter clears away the stagnant thoughts, dispels that which blocks the ethers, and booms a way allowing for dynamic realizations; depending upon the quality and nature of the issue at hand. Without laughter we should be caught so easily within the murk and mire of a fixed perspective, hindered by the gravity of self-gravity, bound perpetually by self-inclination. Even in expansion upon those premise-pivots from which we rotate, we should find little or no great movement, out from which the greater movements swell.

It is true to say that those who have entered upon the dark and gloomy path have lost their great inheritance: that of exploring the most wonderful and vivifying, cleansing and purifying, releasing and enduring, ability to quietly and simply smile and laugh. For a smirk is not as a smile, and an echo of manic chortle is not as a laugh; and for those who have forgotten the gentle approach, they are entrapped in a world impressed with inescapable ugliness, with forlorn prelude.


It is primary to the nature of man, as it is with his higher friends, to greet all manner of outer circumstance in four distinct ways:

1. Is to take that which would make impression upon us outwardly and absorb it into our being: That which is without, becomes within.
2. Is to acknowledge, but know of no such affinity to enable acceptance of the extraneous greeting, and to necessarily deflect it back - usually turning its propulsion back upon itself - denying and rejecting that from the outer, cordoning absorption from within. That which is without remains detached, and once encountered is flung from the boundaries of self.
3. Is to give over such ability of the former two, unto the responsibility of another, and be so affected to absorb that which is without, without the choosing which comes from ability, knowledge, consciousness or self-direction. This is compromise whereupon we give over that which is our self to the directives of natural law, to God or to a demon, and harvest the consequences regardless.
4. Is that of laughter, whereupon we find that we are given reprieve from immediate choice and the impingement is lightened in impeding force. And with the expulsion of laughter we summon great power to either absorb with readiness and magnitude, or deflect back with definite surge and intent. The ability to laugh is to have greater emphasis, with a longer term allowed for in greeting exterial impressions. 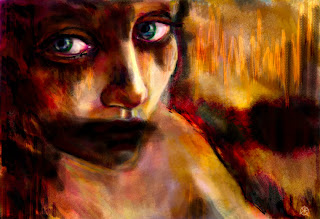 Conversely one may hold their breath, as it is with great despair, shock or sorrow, and have little ability to refuse that which is upon them. This is before the gentle expulsion of sobbing or the violent release of wailing, and in such times the pitiable conditions are exemplified, that are sometimes so large and so great as to affect a man to devastation.


Powers of evil seek out the great and inexhaustible impingement. For there can be times when the will of a man is so overcome and stifled and he has not the ability to sternly reject nor summon a laugh, nor capacity to take into himself that which hideously conspires to bond natures with freak perversion.

The demons have always desired all that the Angels did have. They have never been content with that which is their lot; nor that which is of their making. To try and defile humanity is more for intention to extract something of divinity and have it for themselves; it is not so much a matter of destruction for destruction's sake, as is often presumed.


Of course there has always been the jealous element that would 'shorten all tails' so to speak. But generally those who endure that of the black arts will try every method other than the tried, the proven and the true to find their way into heavenly discourse and become 'better'.


One can see that all striving no matter how misguided, is striving nonetheless. There are inclinations within the very lowest which seek ways of betterment. And whilst they may be utterly despicable and full of debauchery and dreadful deceit, those - the powers of demonic upset - are still nonetheless aspiring to become that which they are not; and this does tell us of their great discontent with themselves and the ways of their own.

The great sorrows which may befall a man are eased in ways renown. However, at times he may be beset by a trial or an experience which is provoked - perhaps lessened, but not entirely thwarted by those Protective Powers - and has been assaulted unlawfully by criminals who choose to shatter their prey. Those conditions which give nothing to man, conditions which are moreover destructive and incompatible, are not by heavenly design and are not self-soul-sought, but are from devious, trialsome creatures of havoc and ruin who press a man beyond his limits in self-proclaimed contest, unfair and destructive.


Men who have but weakened their own standing within the regions of choice, will and discipline, who are now easily delighted with the trifles offered by such demons, do unfortunately become servants of their unforgivable treachery. There are traitors to men amongst men and demons at every shoulder of every such traitor. The entire basis of activity spent and directed is towards overcoming the humble man and the dignified spirit within.


Like most misguided plans there is one fault unseen and goes unnoticed: that the innocent soul who is so beset by plague or by trouble, by murder or by impact, is so loved by the Father and so protected by the Host who do spit upon unlawful activity, and save the soul from further hurt. There are callings for intervention, and in Heaven this is so: that no one may take from another, that no one may injure his brother and avoid the wrath that he himself has invoked.

It is pitiable indeed that there are those who profit by such lessons at another's expense; and yet this is the way, and at the very least there is overall recompense given in the fact that the redemption shall be made. For when we personally come to consider the injuries which we have caused upon those innocent to our former learnings, we do know also something of this regrettable pattern of required cyclic suffering caused and suffering tasted, and redemption somewhere in the process.


The demons are frustrated by that which brings joy to men. They can be quite hateful and without, for when the intention is so devious and so destructful, they are denied those heavenly attributes which they desire the most from man. And you cannot 'wring them out' from a man in any way. No amount of blood-sucking will extract the beauty from a soul and no amount of bone-crushing will grind the formation of a perfect man. It is truly 'back to front'. Rather than getting on with their own evolution they are shackled to that which incorporates, but does not at this time elevate their own status.


Here we could speculate that to a certain extent man abuses the demons. For he shall conquer much affliction that they have worked hard to create, and as a 'sounding board' establish his relationship with the heavens using them as the rear-end contrast to great divinity. It is small wonder that they are doubly irritated, and yet through this they cause more havoc. It is when we lose men to their service that we begin to wonder the price of such ways of learning.


We trust that all injustices are addressed and made good at those times that are best suitable. Some would argue that instead of being racist this approach to entities other than human is so selective it is quite discriminatory: being a 'beingist'! But truly, when one is of humanity and has privy to a glimpse of the vision so held by our Beloved for future patterns set and allowed, one must argue that we cannot be dictated to by lower demoninators/denominators (a good word in this instance), but rather by those who are more highly qualified. We are therefore necessarily discriminatory. Without such discrimination there should be many contrary persuasions who would fashion and design Man as anything but a man; and there are a multitude of creatures and beings one could look to.

We do not seek to hurt another, but we have potent laughter. Men have inherited this, and this has been denied to those who would oppose humanity. And if the opposition is refusing grace and refusing the Word as it is, then woe to them and pity them, and abide them not. We have all been given the simple strength to face evil and deny its presence before us, if men would but know it.


The armies are insecure - they of the dark path have illusion only but no great substance. The war is completely lopsided, with only one resolution preordained. It could not be otherwise. Some might have it that it is, but there was never any contest. For simply put, those of the lower regions cannot reach those of the higher to affect them. They cannot make it. They can upset and irritate the representatives within their own levels. They may prod and poke and prick and stab. They may incantate till eternity slumbers. They may spit and hiss and concoct great fantasies, and occasionally persuade others to believe their fantasy illusions. But they cannot make the climb to view the Face of He who would love them, and they cannot commit others to their backward conditions of murky refuse, and they cannot obliterate the Heavenly powers by their denial. Every time they interfere and cross the boundaries of polite consideration, with willful destruction, they are condemned to a slap and a jab of considerable recompense - not of vengeance but with a vengeance.

They would take from man the knowledge of the true positions. They would hide from Man the truth of Authority, of true authority. They would best hold man captive within their systems of illusion, in ransom for an evolution that they as yet may not come close to. And so it is that they should beguile man into belief of fear and weaknesses that he should forget to call upon his Father and all of the loving friends: those who are kindly and ready to assist, at call or from whimper. For ignorance serves their cunning and temptation serves as incentive. But this is all they have.


Freedom to men may mean many things, but one thing is known: that those who would take freedom from humanity cannot replace it with anything that could be deemed more worthwhile, that they should offer so much when man is equipped with the seeds of all perfection.

Beware of those who presume to be something that they are not.
Beware of those imaginings of pride within yourself that presumes an overbalanced value, which is truly without value.
Beware he who offers a price, and with such a false promise.
Beware of false belief that welcomes such false promises.
Beware of false pride that is so appealed to.
Know of the Divine identity within all men and acknowledge it so,
In the Image of the Divine.
Of God the Father, in God the Holy Spirit, and in the Name of our dear Christ.
For herein is our identity, our strength,
And our inheritance, most Holy and incorruptible
Look not to the Earth but to the stars, when seeking Heaven.