WITHIN the language of music there is a term crescendo, which implies that it is with emphasis that series of notes are to be played and that they will get louder: with gusto, with verve, with intensity, with an accentuated volume - an element of gravity and perhaps grace also.

All kinds of people can place meaning in all kinds of things and thought. Having a sense of meaning is not exclusive to the righteous, or for those in love. Filtering societies and underpinning most behaviors, are the designated 'meanings' which are both pledged and dedicated to throughout.

The one incongruity lies in the notion, that by us having this sense of meaning towards something or someone, we are personally investing more meaning ourselves into that which is being conveyed with importance.

You can see this in the eyes of dedication where the act of importance takes over.... and a sense of superiority follows.

Meaning that is not sagacious, but rather improperly haughty, is dangerous.

The one key to true Meaning with worth, is that it is never self appreciating or prideful.

True meaning is conveyed and given unawares and without airs! It is as the mother or father whispers into the seashell ear of their infant child - and whilst pride is natural, their acts of love are not enriched by it. Their cause is not for the cause itself - i.e. parenthood in general - but for the very specific needs and loving attention required by the child that they hold.

Unless we are to live a parody of emotion and context, it is important that we begin a maturity of behavior that is prudent in self aggrandizement (aggrandize-meant) and more complete in true worth and value.

Of course it does necessitate our thinking and acting to be more self-aware and reflecting to achieve this. Often we take recourse over such thoughts and deeds that are honestly sinful, and do not stop to question or review the thoughts that are composing our meaning of life as they go along. For us, the thoughts of 'meaning' are never to be doubted and questioned, and rightfully this does give them an incredible strength within us. However and importantly to note, it also gives them a dangerous license if we allow this to continue.

To explain: If you consider the great speakers and leaders of the ages, and were to ask the people who had heard firsthand their commentary, you would find that the element of self aggrandizement simply was not there. Not in part or in whole, it was vacant from their talk and their being. And because of this purity of heart and purpose, the truth was conveyed on so faithfully.

Egotism, as differentiated from egoism, always maintains that in some magic way its presence or part is value-adding to that which it holds meaning in. Whereas egoism, can separate self from other selves and from other matters, and work for their benefit and glory without the need to enhance their own self reputation or self worth in the doing.

And even though in natural consequence we truly are enhanced by the good work we do, an infection of smugness is lethal to that work if we are to corrupt it so.

The question originally put was: "Why can some folk can put so much meaning into things which are rituals they have created, or proclaimed acts of love that are symbolic rather than fruitful?", and "Where does true meaning come into this, if there can be so many varieties of meaning given amongst people?"

This is a courageous question, with fortunately the simple answer in part above. Anything pledged or made secure with meaning that is born of egotism, is merely just egotism without the meaning - it has only the facade, motion, ritual and look, perhaps even the feeling of meaning. However that which is worked for, considered and upheld with a love and honor, born from an egoistic appreciation, is with true meaning.

Furthermore, egoistic meaning simply supports that which it conveys the meaning of, it does not believe that it itself is giving meaning to it - for only Divinity does that. We do not impart meaning, nor can we manufacture it, nor can we value-add to that for which we find meaning - for once we have believed that we have changed it by our finding meaning in it, we have negated its meaning in its first right and context.

There was once an elderly gardener pruning his roses in his small front lawn. Some of the bushes had some very cheerful buds and blooms amongst them.

He lived not far from where a big conference hall was. At the end of the 'workshop' day, many people would walk past his little garden to go their cars and drive home or out to dinner, where they could rejoice the day's events.

On one such occasion there were three that went by and noticed the evening's sun glow illumine the palette of roses.

"Oh" said another one of them, "I am that rose - my love for the world has made it what it is; I feel all life within me."

And the other said, "Do you think he would notice if we took some?" 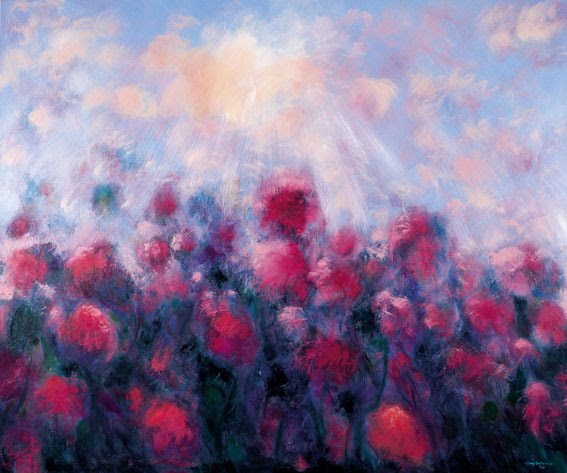 At best we are gardeners: caretakers of the truth, of our charge; and need to be indifferent to the parts we play in their continuance.

If we are true to ourselves, we realize that life itself is much grander than our participation, and without our inspirations guiding us we would probably do more harm than good.

You cannot invite someone to complete another's painting - especially if it was a Da Vinci. You might be the best painter in the world. You might even adore Da Vinci with a fierce and dedicated love. You might identify with him, or simply try to identify with him, but you cannot enhance a painting he has painted, or improve on it, or update it, or even for that matter form an alliance. You cannot put meaning into it for him, or where it was not. All of this would be unthinkable. You can however, put meaning into your own life by how you live and what you do. And this special meaning may or may not be apparent to the world, but is definitely there between you and the invisible host of mentors that help guide you. It is duty bound and privately enjoyable, and though without prize, it is but the one true meaning of profound meaningfulness....