How be it, that the countenance glum,
from whence it is, that the Sun shines from?

AS instructed, it is for all men to become perfect in the receiving and the giving of those Cosmic forces, that they may: withstand all life, impart all life and be as pure receptacles for such rays of Divine Impulse; that man himself does give and receive qualities which will one day flow through him out into Creation, making yet manifest, marvelous enterprise - to be regulated, to be capable, to be as pure as to not deflect or hazard the Heavenly forces, so characterized. To be qualified to receive, by this our imparting made perfect; to be true to design and incorruptible; to be with strength from the inside out; to be immutable and one and the same with God.

Because we are not as yet so perfect that we may breathe in the Heavenly aspirations and breathe out such pure substance, because of this, we have One who is before the gateway post of humanity who does surrender His Holy capacity for such, lest mankind be blown away by Cosmic wind or icy draught.

One can well imagine such immeasurable effort and consideration, with concentration unerring, with dedication unmovable, with true love unforsaken, in this as conductor of all mainstream force and discharge.

There shall be no time for rest and recreation, no time to smile until such Sentinel be relieved.

Our dear Christ suffers no less than He did at the time of execution. He may well 'dance around the world', but the Resurrection so referred to, did not for Him, relieve Him of His duty, His suffering, His surrendering, but rather made statement thereof. By no means is this the time for Humanity to go frolicking and believe ever falsely that the pain has ceased or the work been completed. 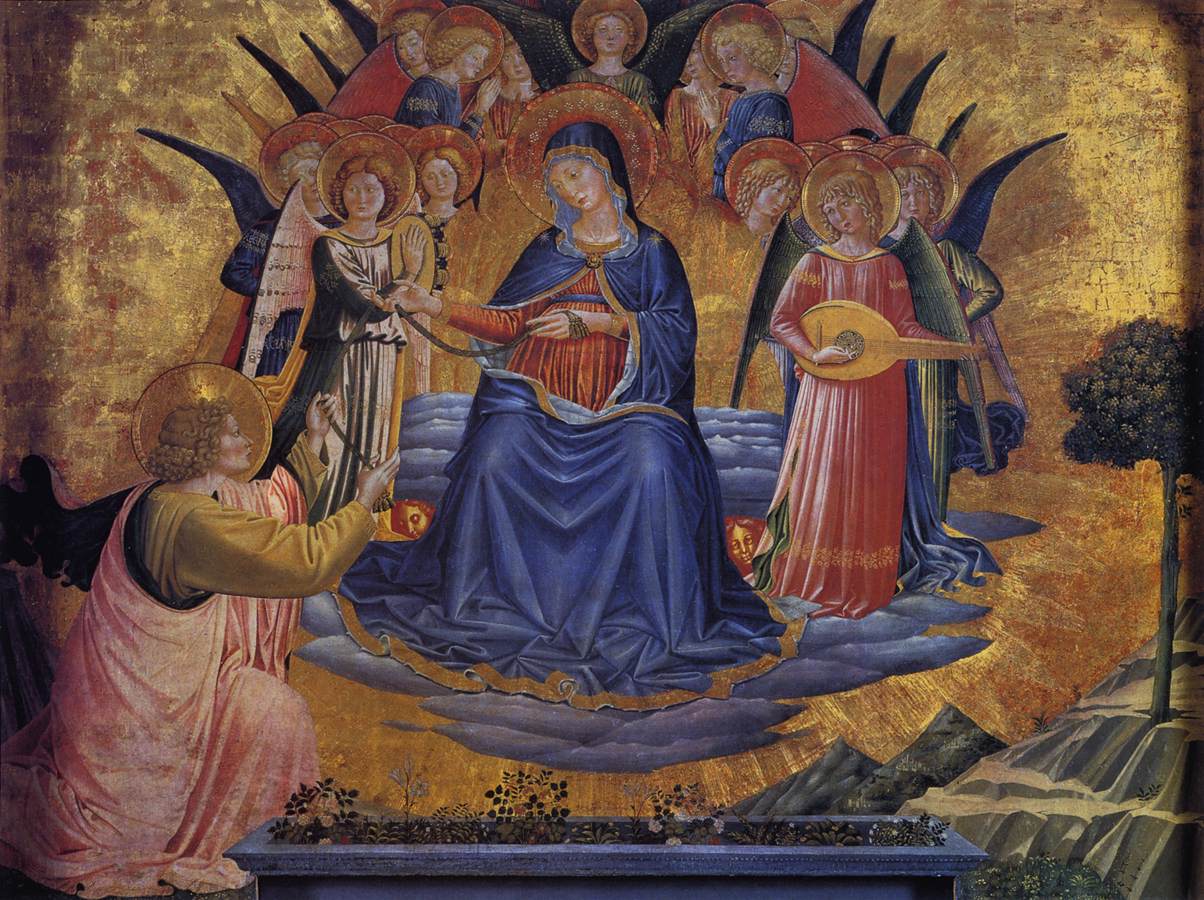 All life is a gift which we accept graciously or ungraciously. Some would believe that all that comes to them is theirs to have; that there is 'divine right' with names on tags, and that it is 'just' for such ennobled creatures to be bestowed over and over again. For those who would take unto themselves and give nothing in return, they shall be soon vanquished and spent, for there is one Law of provision, one Law they shall come to know.

If it were true that the sins of the world could be negated so simply - and let us suppose for one minute that this was the case - then where, we might ask, is the evidence? They are ever perpetuated. It is true moreover, that mankind would long ago have been swept away by tides too strong to comprehend and manage if it were not for the One who submits Himself to taking to Himself every scrap and impact, that we as yet, cannot.

How long the enduring? Are we to walk away and be well satisfied saying "Lo! The job has been done, see! I shall have no part in it! I shall spend my time taking glory to myself. If my brother suffers, it surely is his fault! For I am accomplished, I have been saved!" This is surely the greatest vanity to presume so much. If there be any aspect of Christ within us, then it becomes our duty to begin to alleviate His burden; no matter how little we contribute, we must be forthcoming. It is certainly a question of becoming open to this; and not in word so much as in: heart, mind and deed. Not in speculation, but by a living revivification of this truth, which compels correct assessment with equal reply. Pity the small, pity the grand, the weak and the strong; and bring charity into your perspective at the very least.

Our Savior is much preoccupied. He may split into as many divisions as there are souls who need; and souls there are, for truly He becomes as them in order that he might save them accordingly. He does not, however, split words with common conversation. And although empowered to withstand such effort, effort it is, nonetheless; for as said, He will not be content until the last of His flock is gathered in- thankfully.

There are men who too easily would forsake mankind. They believe themselves to be true to themselves, and yet even in this they err. We do but refract our humanity. We cannot divorce our divinity. We can however, make choice to waste literally eons unto eternity in combat with unseen foe.

One may only surpass one’s limitations by encompassing those limitations and making a complete passage into the next: a series which affronts the very horizons of eternity. For now the circuit is closed. For now we are relieved of much that is not within our powers of control to withstand. We may be permeated by much, but what use if those powers were to break a man apart?

We need Christ and all of His labors, and He needs us to acknowledge this much. Seizing actuality need not be depressing. To the contrary, we may draw complete inspiration from this. For surely it would be difficult without such sacrifice given, for us to wish to offer the same.

The job at hand concerns us with our own humanity. This also needs be the case. If we were equipped to take leave of our system and our mainstream evolution, then we are doubly equipped to take on work right here at home.

A compassionate man does not plea distaste or disgust. Any system other than this will slough off those foreign to it; just as we may do the same. The souls who wish to immigrate to foreign realms, may of course hold passport for visitation, but not for an indefinite stay.

The babe in the womb cannot take nourishment without, and similarly all cords of ours lead to Christ. In reality it was Christ who bore Mary, as with all of us. The mystery of the Madonna is such, that she is quite separate to Mary Mother of Jesus. For the Holy Madonna is His Being also: one of the same, but not of the same. The Christ Child is verily Mankind in infancy. Our aspect of containment and protection is His Face of she: the Holy Mother. He the Creator, is manifest in dual notation.

He too, is compelled to make good what He has done. Within the continuum of time all things may come together. What was, and that which is to be, may manifest concurrently.

The two Aspects of Christ are not in contradiction to the One who is Perfect in Both. Without such polarity there would be complete unraveling.

One may create and create, ad infinitum, but there should be no fruition of offspring: continual spawning, with souls shafted and discarded - much alike to the early Church Fathers' point of view. But each soul is regarded and so worked upon; and not left in place of those newly 'coming up'. In point of fact, there have been no 'new' souls since the beginning of time (albeit, in Cosmic terms that was not that long ago).

Those who refute the law of re-embodiment and necessary reincarnation upon the logic which speaks of 'overpopulation', would do well to reflect what the consequences would be if 'new souls' were so easily called into being, endlessly without rest. There has to be an end somewhere. The gates of Heaven would surely be clogged - unless of course, they adhere to either negation of such souls, or circulation of such souls. Whilst it is exact to speak of circulation, it is circulation (as in circular return), rather than Eternal 'shove'.

We are taught that everything has its limit, within its limits. One may certainly go beyond limits, but this will not change the limits of those one has gone beyond- they shall still be limits. If we are to in any way make changes as to limits, they will still be limits defined which we seek to change. The concept of infinity can be confusing to say the least. If we suggest that at this point in time, there is a limit as to what the soul can and cannot do, and a limit to the number of souls doing this, then there may be argument as to the size and nature of the limitless. Possibility is limitless but actuality is limited; certainly, in relation to time.

Without definition, all would be as one great sea of nothing - or everything, if you prefer. It cannot be considered both ways- if it is attempted, it will become extremely confusing. In point of fact, one cannot arrive at the concept of infinity or eternity by reason. One negates the other. So we are compelled to review and observe that which we know and recognize, within defined limits.

Is Christ an Individuality? Some would speak of an 'Impulse' alone or a 'Force', or a condition and so forth. He is more of an Individuality than we are as yet - by the bye - individual-duality.

There are systems who are not as fortunate as ours, whose Master, though qualified, has not His qualities. Sometimes we do wonder if the furthest emanations occasionally spill down and infill some of the men of humanity and inspire them so. These Masters may be equally as mighty and as capable, but are stern taskmasters who do not necessarily transmute the powers of giving to any degree mentionable.

It certainly is a big world out there. And so we must be grateful, grateful to: our beloved Christ, the Heavenly Host who answer His beckon, and to the Father God whose radiance permits. Our personal Savior shall be reckoned at the time when we best emulate He, who surely bears the burdens of the world with grand expectation.
Posted by 888 at Tuesday, December 01, 2009