The sound of the rain is truly soothing, isn't it? When we spoke the other day of the etheric impact that sound explains something to us of, think of how in illness and in health one might remember this. 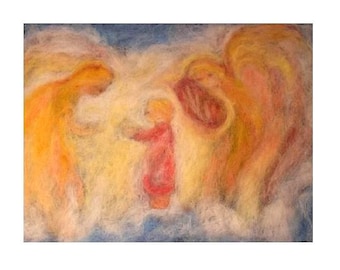 It is instinctively known that the very ill should be kept very quiet, with no 'jangling' noise to disturb them; and sadly for those in hospitals with much equipment and bustle, there are too many disturbances. Think also back to those favored lyres, that although they may not relate any particular sequence to make music, have a profound effect, bringing soothing and imagination into the surrounding ether.

THERE ARE very few jungle regions in the world today, and contrary to the belief of those who picture a past paradise, there were as few centuries ago, to be compared with today.

The life-forms belonging to the humid regions, the prolific wild vines and trees, the exotic plants, the three hundred thousand or more, varieties of creepy-crawly; the enlarged and colorful reptilian host and lastly, the dazzling bird-life - all of these cohabitants belonging to the jungle environment, give to man the closest concept of the nature of the astral world.

It is a dangerous, unfriendly and extraordinary environment. There are very few folk, who, not born within and native to those regions, could endure a stay of any duration, let alone feel comfortable about the prospect of settling there permanently for an entire lifetime. Very little peace is to be experienced and although there is much vitality and such prolific, almost crazed growth, the experience of man in such a jungle usually ranges from extreme annoyance, watchfulness, to a condition of aggravated fear with subsequent aggressiveness.

In contrast, the nature of the European landscape offers man, in experience and perception, a certain repose for soul-reflection. The threat of the climate is of chill, but does not of itself cause the glandular system to work overtime in sustaining from one breath to another. The tone and the impact of the colors of such a countryside are issued from a different scale, and the native to these regions experiences sight very differently to that of the jungle tenant. Colors speak to the eyes, and eyes that are accustomed to receiving vivid perceptions, cannot in fine detail, distinguish aspects that the eyes of the watercolor region have adapted to. The South American, the African, could not conceptualize visually, the detail that the Swiss or English could discern. However, the European man visualizes as through a window, and cannot adapt to the strength and intensity of visual conception and relay that the man of the tropics has developed to receive.

The physical skill of the tropical man is adept, with a keen motivation from instinct. The reflexes of such a man are sharp, and the muscular drive is superior in ability. A European man would have little or no hope of matching physical skill and endurance with the native of the tropics.
Returning to the visual aspects and perception, one can see that within the relationship to the applications of fine art, the European displays great finesse and tardiness in respect to fine detail. Blatant symbols and brushstrokes that are indicative to the tropical man are transformed by the 'window' perception of the former.

The careful and precise artistry of the Oriental tends toward both perfection and inhibited interpretation. One should not find flourishes of extreme color, nor clumsy application. The pictures of the Oriental do not suggest that this man is immeshed within the astral consciousness. With careful, planned, exact application, the Oriental could, with photographic skill, replicate portraits, but does not choose to incorporate such talent, tending rather to convey with simplicity, the essential nature of the study chosen to reproduce.

The Western man can find much difficulty in developing such talent. Usually there are few who can exceptionally work with brush on paper with skill. The Western art today implies a free hand, whereby the man is rarely connected to the hand that works the brush, and the necessary discipline or instinct, cannot find its way to motivate the artist.

The children enjoy the tropical man's aspect, growing up in the formative years from one to seven. However, as the consciousness shifts, and the flurry of environment presses in, there is much visual contrast and conflict that deters artistic interpretation and expression. Cartoons seem to be the end result, unless rarely, the individual has a strength of ability, a determination of character, that can overcome the physical inadequacies and overlook the physical/visual bombardment that is encountered in later life.

Usually true art is motivated by the spirit of the subject speaking to the artist, and the desire of the artist to reproduce the image that speaks to his soul. However, within the Western World there is an extreme influx of a sequence of images whereupon inspiration would be very difficult to derive. Visually there is a great clashing and a clanging of forms that are 'soul-less' and images that are incoherent to the soul-speak.

This environment, of course, mirrors the concepts of the modern man, who has set upon a path of adventure seeking the free, the extraordinary, the unique; and subsequently has surrounded himself with concrete, Walt Disney, and food that has to spring from a package being enclosed in colors and writing quite foreign to the former nature of that food. The artistry must be abstract if the life experienced is abstract.