LAUGHTER itself is a form of 'knowing' - and not the 'unknowing' that it is often deemed to be.


The 'laughter of a fool' has been used to characterize all laughter in the main, giving it a reputation to be the lowest of reactions, with base causality. However it is our reasoning that the laughter by its very action provokes thought within and without the individual. And it is not a solely responsive activity but one that has consequence and meaning.


Animals do not laugh. They can be playful and express merriment, but they do not catch a humorous idea in its truest context. One might argue that it takes a self-awareness to enable such humor, yet the infant can laugh without being old or aware enough to self reflect upon this action directly.

Plants fail to laugh - they are stern and serious creatures that would not know how - and are oblivious to the elementals' gaiety (the faerie folk that party on around them). They perceive laughter as a noise, or at best, an energetic discharge that might encourage a bloom or a fruit to expand, but never actually conceive that a joke or an observation or a high jinx might provoke the outbursts within and about them.

Rocks do not laugh. They are intent - at least what there is of them here within this World, is intense and compounded. A fellow from the mineral kingdom would fail to see the funny side of anything - it is not in his nature to be anything other than what he is. The minerals are graced by the influences of many individual beings which can be stellar or elemental. These beings exhibit a 'gentle' humor, rather than a slapstick comedic play that the plant beings exhibit.


A gentle humor can really take in the moment, when particularly, by loving observation, one identifies something quite wonderful and endearing within that which we are watching. This disposition is given to the Angelic realm and beyond - that their entire perception of Creation falls into this regard - in constant revelation and adoration of the All.


To have a good nature often means a good humor. Criminals do not have a good humor - their laughter is cynical, dismissive, critical and cruel. It is not the laughter that comes from a healthy soul. It is neither funny nor energetic, but rather an extension of a snarl. For the criminal is but breaths away from their animal-hood, manifest by their behavior and indulgences.

Philosophers laugh well; as do clerics and clergy. Yet dancers do not - they and others who live a physically disciplined and challenged life invest their energetic wills so much within their bodies that they are drained of laughter, and prone to hysteria or similar outburst.


The child who is physically trained to excess will have a sorrowful countenance and but few moments of happy jubilation, as discussed. For although it is commendable to exercise, there can come a point when the athletic routine drains the will and the consciousness of its independence. And without independence, one cannot laugh.


Similarly a strong indication of a strong and enduring sense of self and awareness of self, comes with that of being able to enjoy true humor and find a laugh. It might sound obvious to note that 'broken' individuals - adult or children - lose their ability to laugh. Yet it goes to consideration here because once again the true value of laughter itself is being contemplated here.


Masters and teachers laugh - with both the gentle and the comedic. Their laughter is for twofold purpose. It is for themselves and for others.


Laughing for oneself is not dissimilar to preserving fruit in glass jars. Straight knowledge that we acquire, holds very defined relationships to past knowledge we have accepted. We are often brought to the gates of knowledge many times daily, and that which is accepted and taken into ourselves, goes into its respective attraction. The egoic knowledge is like that; although all new thought is originally acquired through the imagination and the imaginative cognition (i.e. if it is not self-consciously already known, it needs the imagination to bring it before our reasoning). However, the ego itself is progressive and connected, and tends to link and refer by way of its thoughtfulness. It cannot know what it does not know; it does not attach that which it has no resonance with.


Yet when we come to that point of a clear clean laugh, taking in the humor of a point or a moment, it does not necessarily (and more often than not) have to be a part of our expectations or progressive referential knowledge. It is 'outside' ordinary happenings - or at least our expectations of them. Essentially most humor is characterized by this alone; and when we laugh it is as though we can take the thoughts that come from the situation as bottled fruit.


If I put my fruit into a jar I can carry it around with me, and if preserved properly it will stay intact within the jar for some time to come. But if I do not put my fruit into the jar it will disintegrate quite rapidly and I cannot take it for long or for far - unless I eat it and thereby assimilate it into myself.


So the point here is that there are two types of knowledge that we can experience directly - and that is the egoic progressive knowledge where we might take the fruit and eat it and assimilate it, and it becomes within our own makeover part of us thereby. Or alternatively, we can hold the fruit and carry it around in a jar for observation - not eating it, nor dismantling it either - and this is a type of knowledge that by its action teaches us a form of individuality - a conscious dualism - that identifies separateness (separateness in a good way).


You see, a lot of men and women are only drawn to know much about things they already know or identify with. This is the ordinary way of knowledge and in itself is useful and to be expected - that it can grow furthering itself - and so it goes. It is also very much a consuming mentality - it can even be voracious.


Acquisition into self or by the self is fundamental to most creatures. See something you know and like - must have it, eat it, keep it, etc. And even with 'higher' knowledge, this simple ambition of acquisitiveness can go on likewise.


Yet with the profound gift that laughter can bring to ourselves and to others within the human context, we find that even as with the small child, the knowledge of something does not have to be within our realm of immediate experience or preference to be caught, held and understood. 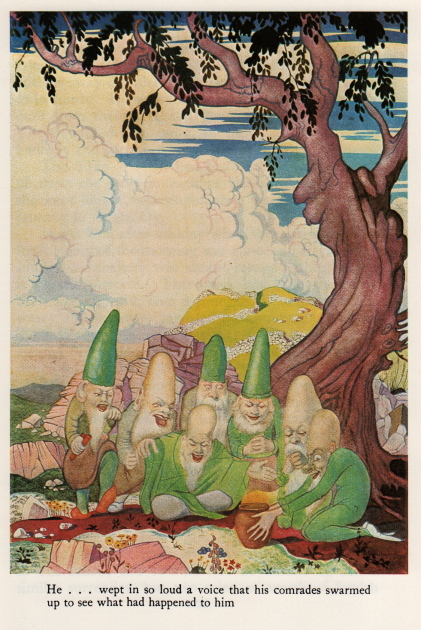 Now there is a catch to this, in that there are prerequisites to having a humorous thought - and firstly, one is that of an active intelligence. Our point is taking form here when we think of children and imbeciles who lack referential knowledge, but still have an intelligent cognitive awareness that can realize certain happenings in order that they can laugh. And the fruit in jar experience of knowledge means also that we ourselves are not retaining that knowledge either - not in a contextual or personal sense. But what is being experienced here is an aspect of empathy and then separation.


For example - do you remember the joke about the dwarf who had his walking stick chopped off at the bottom without him knowing, and he thought he was growing taller? There are several parts to this humor and so it goes:


1. When we realize the connection between the walking stick and the sense of getting taller being possible.
2. When we think it is a dwarf, who is already short, going through this.
3. It is not a joke, yet we dare to laugh at it (i.e. makes it more funny).
4. It is an unexpected happening. The dwarf did not expect his walking stick to be chopped at the bottom and we did not expect to hear about it. We also do not expect this to happen in ordinary life. We do not even expect to laugh about such things. Our sensibility of expectation has been disturbed (in a positive way).
5. We are relieved this could not be a real story.
6. We are relieved it is not ourselves.
7. Although the image is sad it makes us smile. We are relieved that we are not sad.
8. Because we know it was all nonsense, we have returned to a stronger sense of self than we enjoyed a few moments ago. We find ourselves intact, and as before, hold a stronger sense of this.

Contrary to how it may seem, Angelic beings have a supreme sense of self in relation to what and who is about them. And although they work in unity and to some degree conform (although their love extends throughout, and most of their employment is selfless) they still, nonetheless, hold an all-powerful sense of who they are.


If you are endeared and amused and jovial when watching something or someone who makes you laugh, you are clearly not confusing yourself with what is before you. You are, if anything, extracted out from the situation - much more than if you were directly engaged in it.


For most folk, when they are active doing other things (other than laughing), their concentration links them in the moment and they are not as separately self-conscious because of this. You know the feeling, especially when the time goes ever so quickly, when you seem to dissolve into the activity, the day, or the discussion, and are very much a part of it. There is a certain commitment as it were to living.


Yet by contrast, a humorous episode brings a feeling of clarification to the mind, and takes, for one moment or so, the personal out of it. There is a sense of being an onlooker - more from the soul's own perspective, rather than by being directly engaged in it.


The teacher finds humor for others as well as for himself, to help bring his student (or colleague) into that disposition that is of the kindly observer, who learns that knowledge can be very good without being necessarily something directly taken to benefit only ourselves.


There are times when we need to bottle fruit to have later on. Can I stop what I am doing and observe a curious behavior that I personally have no need for or can recognize? And does my heart warm with the contemplation of it?


Small babies have to bottle fruit because their referential knowledge before a certain time is so small and disconnected. In a similar way we can gather all kinds of knowing to ourselves before our time of truly reasoning with them and understanding them; and the way into this is via humor - or more correctly, the disposition that it brings to us.

We are not saying that everything obscure is funny, or that we are to laugh at everything we do not understand. But that the path to seeing the lighter side of something is the heavenly way. Of course Heaven itself has the advantage of knowing that all is well at the end of days; that Life is uncanny, mysteries abound and Divinity smiles.
Posted by Bruce at Thursday, September 29, 2011