WHENEVER suffering is usually addressed it is either philosophical and comparative, or requisite to the need.

Perhaps it is too difficult to contemplate the nature itself of suffering - and also the terms in which it dwells; not only here, but in the Spiritual Worlds.

Sorrowing and its suffering comes into being where a consciousness is 'at odds' with something they desperately would seek to change, but cannot. The will is strong, the mind in the matter is resolved, yet the truth of the reality refuses to comply - and this is suffering: an inner tension that struggles with the outer reality that refuses to conform to it.

In this we can sorrow for ourselves or for others, for events cannot be changed because they have come and passed. And for those we see coming, we can struggle and suffer for the largest and minutest of trials. The fighting disappointment that glares, gripes and knifes, is as the lonely warrior who will not concede that the battle's moments are in fact quite gone.

Having said that, suffering itself is born of the will and the mind-consciousness also. We can deter much of its sad poison by learning to extract back our wills and willing out from the experience.

Using our active will is painful to the soul when there is simply no plan for that willing to be directed properly with. Suffering is essentially that exact problem.... that the active will is thwarted and the individual is putting much vitality into a screaming farce.

In this you can see the two parts to Suffering now clearly - the one is the inner knowing and deciding of hardships that you personally argue with - taking on destiny, karma, the elements, death, aging, injustice, men and monsters, lost love, and all injustice; whilst the second part is the inner mustering of will which rises up to effect a change towards the better, but has nowhere profound to go. This becomes a worse aggravation and a suffering in itself - secondary suffering as it were.

Learning to pull back the will is extremely useful; not only in suffering, but in all kinds of daily situations. Whenever we advance ourselves, it always requires a propulsion of will to cut through the inertia within and without.... however, just as we breathe a good breath, we can also consciously retreat our wills and monitor the expense we so give to them. Always better not to overspend.

Internal imaging can help at first with this new discipline - it maybe of dogs on leashes drawn back, light from the hands and wrists pulled in, fire down, going to ground.

Conversely, using will in a constructive way alleviates the suffering. That is why you often see folk who have suffered much, working to bring positives into their life and investing their will in something - almost anything - which will bear fruit. It is not injurious to themselves to do so and the suffering is indeed alleviated.

To lament or to sorrow is to grieve at the deepest level. It begins to mourn the primeval injustices, the causal iniquities and the sadness of all. With this there is no strength for the will, and it appears as if the soul who grieves thusly is bereft of any sense of self thereby it - lost amongst just one eternal cry. These very sad lamentations are audible all throughout the Heavens.

Not only are these bleak remonstrations coming out of the one soul that is Humanity, but also echoed by the attending angelic and archangelic soul-mates to Man.

There are so many numerous splendors in the Heavens of rich expression - and experience for all. Yet underneath that lively hemisphere of dancing worlds is still the ineffable contrast of primeval woe.

This subject touches upon the flip flop reasoning which can be in the practice of esoteric thinking. Because having entered upon this level of the topic, we now need to press further and ask "to what good purpose can this essential sorrow prove?" and "why, when we are promised so much joy in Heaven, should there be great grief as this, as well?"

Somewhere in the halls of fakery is a place of serenity without end. Serenity that does not alter becomes inertia, and inertia is a greater death and therefore sadness, than any death by change could cause. All misery and upset, even cruelty by those who are yet to learn the consequences of those acts, is better with time, rather than committed to a ceaseless void of no change and no improvement. To be static even in bliss, is annihilating. Life which is powered by the Holy Spirit, by this Divine Will, and is exaggerated into Creation by those inspired by Him - such Life is ever moving and seeking new forms to infill new episodes, to become and new futures to behold. And whenever change occurs - be it here or elsewhere - that change, for some, will be too early or too late and therefore struggled with.

Yet it can be said also, that there is forever a striving to improve such conditions so that these margins become less, and the general swerve of Creation moves together with a satisfied timing throughout. 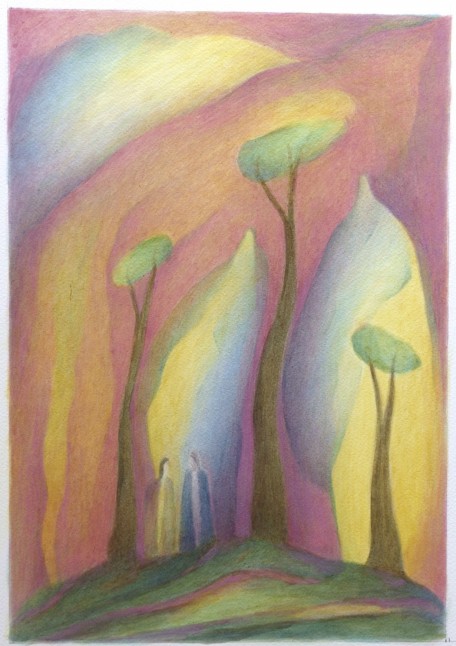 Of course all periods of time do cease, and with that cessation prayers are answered. There is always a gathering in of souls where individuals are reunited and hopeful imaginings can become more possible with the new opportunities to follow.

Past sorrows are truly forgotten in the shift, and the transitional woe dissolves in the dewy morning of Eternity's herald.
Posted by 888 at Friday, June 10, 2011