LEWELLYN the gamemaster carried a mysterious bag, in which were his dice, his cups, his cards, fake jewels and matchsticks. He wore silk and did pride himself on courtesy - even when he was cheating (masquerade he would call it) as part of his show. Fine and courteous and above all, intoxicatingly appealing; a grandmother would trust him, so too a father with his daughter.

He would incite greed. He knew exactly how to stimulate a man. He knew how keen men are to break their boredom and exchange chance circumstance with another fellow. He preyed and he played, and he never left without taking from them.

Entire towns could be torn, the families ill-content; for a year's wages would be wagered and lost, all the savings gone, plucked from an upset household . . . and Lewellyn's bag mysteriously, no larger upon leaving.

At first it had been a fetish which became yet another challenge. It did not really matter what was the object of the game or the stake at hand; it was the consent and dissent, and then the actual winning. For win he must, at all costs! 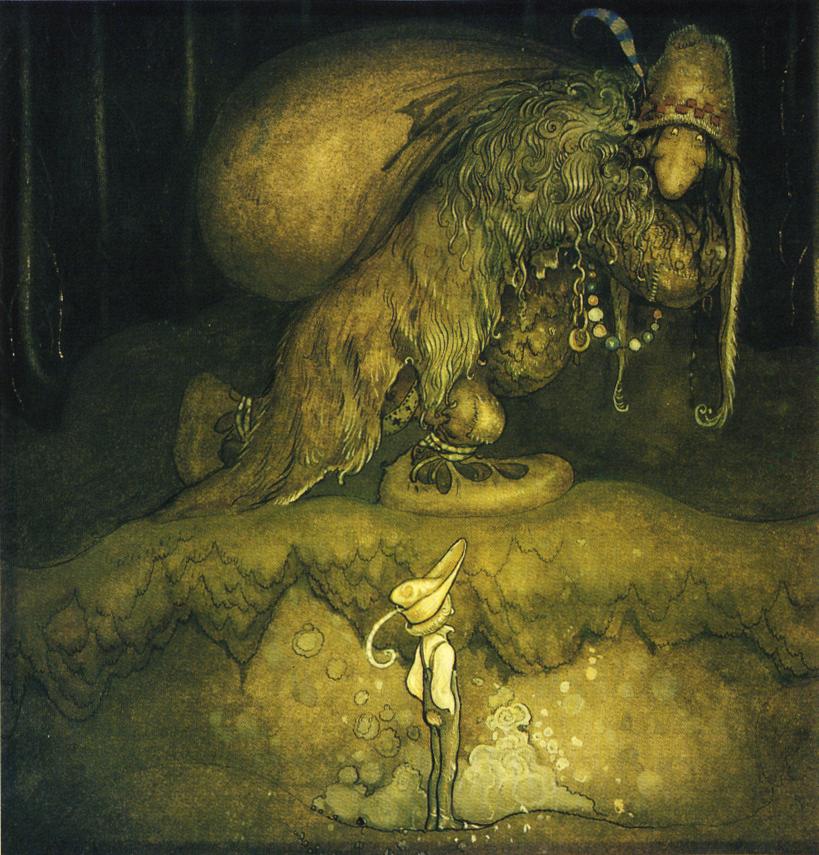 One day he happened upon a bridge, one of those bridges that conceal a troll beneath them. The troll was a sturdy fellow, twice the breadth of Lewellyn and thrice the height. His breath was overpoweringly strong and his hairy bulk alarming.

Lewellyn was prohibited from passing on the bridge, for the troll of course, had declared it his and made a point of being disagreeable at all times.

"What is in the bag?" he gruffed.
Lewellyn was reluctant to empty out the contents, for he never revealed all of his cards, never made known his mystery.

The troll seized the bag and blithely shook it upside-down. The colored glass rolled down and away and slipped through the slats beneath them, 'plop' into the water. Some gum and some wax, a bib and a bob, a wheel and a bundle of sticks, his hand-painted cards and their replicas fell out.

"Games!" chortled the troll. "I love games!" he stared at Lewellyn expectantly. Never without opportunity, Lewellyn proceeded to shuffle; for one moment he stopped and stared hard at the troll and said: "I win. . . you must give me. . .", here he paused for he could see no evidence of treasure upon the troll - the troll continued for him: "Freedom".

"You win" continued Lewellyn, "and I must give you. . .", here he was interrupted again:

"Your hands!", blurted the troll.

"No, no, no!" hastily replied Lewellyn, who did not enjoy the prospect of this chance.

"Your feet!" gruffed the troll.

"No, no, no!" considered the now disturbed gamester.

"Your eyes!" demanded the troll, agitated by the argument.
"Your teeth. . . your hair!"

To this Lewellyn settled upon, "My hair", he sighed and crossed his fingers and breast and recited every lucky charm he could bring to mind.

"Death to the Queen! - I win!" said hairy Troll, for his spade had cut the Red Queen down. But Lewellyn had yet one more to lay down - his Jester.

"I win!" shouted Lewellyn triumphantly (as triumphantly as he could muster verve). But the troll would not have it, he was insistent that the Jester card was ill-gotten and fraudulent, and that he, Troll, was the rightful winner.

"Alright then" said ugly Troll (ugly but fair), "I shall call upon your angel for the truth and she may best decide this."

Having said that he drew himself to full height and clasped one arm around Lewellyn's neck, the other drew blade with startling menace.

"Angel come! Or I shall do an injury you will regret."
Instantly, she appeared.

"Tell me Angel, for you cannot lie - was the game fairly won by Jester or by Spade?"

The Angel heaved a troubled chest and approached the troll, staring eye to eye. She then looked into the mind of Lewellyn to find the truth and then replied:

"If Jesters win,
then Jester won,
as you can see,
this man's a clown!"

This caught the troll's humor like nothing else, and he laughed until his sides cracked.

"I'll take your hair anyway" he replied; and plucked it out, piece by piece, follicle by follicle.

***
When Lewellyn had incited the hope of 'winning' and pitched himself against other men, he had balanced the game in a way that only he would result as the winner. The troll presented this to him, as there was no way he could have been the better fellow, even and especially by means of trickery.

The psychology of 'winning' is little understood. One could suggest that it is special to matters of wealth within the world, and yet it is moreover a spiritual flaw which inhibits a soul from perceiving real providence.

It is dangerous indeed to seek to 'win'. Men are so stimulated they are quick to lose mind of weighted realities. The electronic games, for which there has been much talk of recently, actually have the greater effect upon the individual because of his lust and drive to win. If the component of winning was withdrawn from the stimulus response, the eagerness would dissolve.

To some this may be considered as healthy competitiveness, however we would maintain that no competition is, in the long run, healthy.

When a man seeks to win he immediately divorces himself from all other men. It becomes a relationship of he and the world against whatever opponent. We must realize that the balance of winning is made up by those who lose - even when it comes to simple monetary exchange, the same rules apply.

Some would suggest that at the outset, it can be fair and equal chance, whilst quickly hopeful that the grace of prosperity will smile more favorably upon them. Furthermore they shall cast pledges of the moment in order to 'win' favor with chance. Here we begin to slip.

As men we must develop the strength which avoids speculation and does not place hope in winning undue, unwarranted prizes.

There is a subtle difference between the positive-thinker who can wish the world well, and he who would wish only for personal furtherance. The God-given ability of pre-visioning prosperity is best used - and far more potent - when it is directed with pure intention; pure intention being free from any personal consideration, any whatsoever.

If we are to identify with winning, and not become masters of conduct steadfast and pure, then we will become disappointed and are destined for ruin. This ruin shall be either in madness (resulting from greed) or financial, or health. It is not to say that it is deserved and therefore has cause as recompense, but that it is what it is - inevitable consequence.

For we may set our minds towards hopeful outcomes and look forward to possibilities with great hope and vision, but should we place our intent with valueless wishes (soul-less, loveless, creative-less etc.) then we deteriorate within, our soul no longer connecting with our conscious self. The conscious self can battle to such an extent that this frenzy causes the severance of the incarnating will. The 'plug is pulled' so to speak.

It is a soul-less activity to 'interface' with an electronic medium and set about to win against something, which as the troll, will 'take your hair', whatever the outcome.