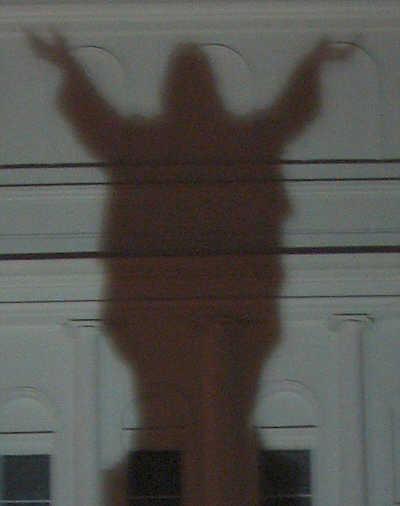 DISCONTENT is a fine motivating factor and alarms the individual to the possible consequences of pursuing further any particular line of operation, because they can identify having been down that road before. But once this is acknowledged, discontent with oneself generally is unproductive and is only a self-indulgence that delays further learning.

Once an individual has sighted a path that resounds in the heart as being true and correct, then a certain rejoicing in spirit takes hold of a weary soul who has tired of the error of former ways. Release and renewal from the past that one might go on, this grace is the Shadow of Christ in which we all dwell. This grand possibility for divine renewal is the release of our former ways, the indelible imprints and the burdens we carry; the ability at any time to throw off the cloth of our former selves and find identity in worlds of a higher nature, a finer substance.

There is no limit, no boundary set, in the ways one may improve and learn. Many are caught in a net of repetitious delusions that require submission, that the creations of our own being may perpetuate themselves. However, desire to effect changes in one's condition and within one's own being, will of its own present opportunities and challenges before the soul, that should assist in offering the progression onto the desired 'new life'.

Such challenges may bring either the extreme of suffering or temporary indulgences. However, inwardly the soul at all times is far stronger than the personality would have us believe, for the personality never endures, it must effect constant change and be impressionable from within and without. The soul welcomes the unfolding drama, as it seeks to glean from the arena of expression and existence, and is never satisfied.

Many individuals renounce their immortality, but can they come to terms with their own mortality? The former denial is understandable. For within one's consciousness daily it is almost impossible to grasp knowingly the consciousness of eternity and immortality; a glimmer yes, but an actual impression conceptually, no. For consciousness is such that it requires us to be in the one place at the one time and not expanded in a way whereupon we may realize all places at all times. One must fix a position, a center of operation, so to speak.

Recollection of past-lives would interfere greatly with one's perception of the moments today and experiences of the future would surely be retarded in like fashion. So if a man has not even a glimmer of the worlds ahead, this is not imperative to his standing in the world today, as the reality of the future of his soul will in time unfold of itself.

However, can a man, particularly the man who experiences no connection with the spiritual worlds, perceive his own mortality? If this was accomplished, what a wonderful carrot and stick for the beast he should have! And so we suggest to the materialist that if it is impossible to contemplate higher worlds, then look hard to the world you know of with a sternness of attitude that a consciousness of impending death requires, and live each moment in the light of morality and self-improvement - waste not one minute! If all men held death before their eyes in waking hours, and before entering the gates of sleep, then surely their seriousness, their pursuits and inquiry, their endeavors, their strengths, their honesty and compassion, would increase one thousandfold!

One's mortality is far more difficult to realize and come to terms with, than that of future existence. Because in truth all individuals know that death is ever a new beginning. If one were to sit at the bedside of any atheist who is near passing, should he tell you then that he is destined for the dirt?

Who might suggest in all honesty, that there could be no divinity, no higher intelligence, above that which we know? The higher-self in man knows of his wonder and gratitude for his spiritual heritage, and if the lower consciousness may be quietened for a time, one's higher-self will reassure the troubled individual of the glorious destiny that awaits him.